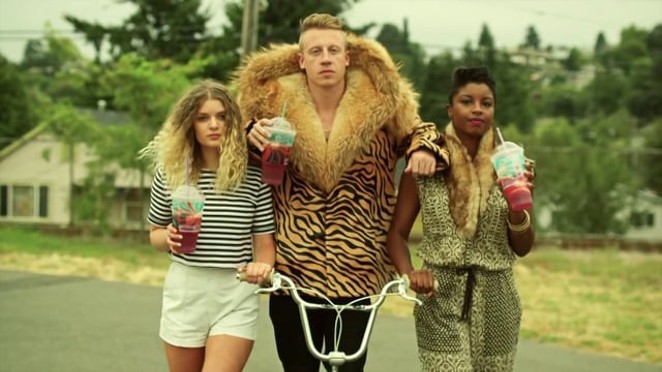 youtube
Macklemore
Known for taking the swagger and confrontational content of hip-hop and white-washing it so that even grandmothers, toddlers and Republicans can tolerate their kitschy interpretation ("Thrift Shop"), Macklemore – whose name hurts my tongue and sours my tastebuds to pronounce – and DJ/Producer Ryan Lewis – whose name is perfect for a white dude from Seattle, because he is a white dude from Seattle – will be at the Majestic Theatre Monday, January 11.

Before you get all up in arms, dear reader, regarding my displeasure with the duo, particularly their introduction into popular culture via the aforementioned "Thrift Shop" video, let me say that I think that the release of "Same Love" and their contribution of one dollar from every ticket sold on this tour to Equal Justice Initiative, Youth Speaks and the 30/30 Project is admirable and commendable.

My issue with the duo lies completely in their initiation into the mainstream via a hip-hop aestheticization, while operating above the safety net of "we're white guys making fun of white people, so it's ok." That is not to say I exclusively blame the artists – the duo have been working in the hip-hop medium together since 2008. I do, however, blame us as viewers, taking another ride on the tired carousel of African-American appropriation, that in this scenario, gets a free pass because it is seemingly using whiteness as a punchline and does so on the back of a sincere art form.

I guess what I mean to say is, I've grown very weary of historically Black art forms being used by white folks to exercise their white guilt or air their grievances or poke fun of whiteness, in a comedic tone. The country versions of classic hip-hop songs, is a great example. If I can't find the perfect words and phrases to express the complexities and engrained nuances of this issue, I can only fall back on my gut: it feels too much like a further denigration of something African-American, once again, using a Black mode of expression for white profit, and doing so with little respect for the art form.

Again, I do not put the responsibility or blame entirely upon Macklemore and Ryan Lewis' shoulders, they have been releasing hip-hop music since 2008, and much of it is serious stuff. Something about "Thrift Shop," specifically and its reception in a country that often denies, outright, the existence of racism amongst its citizens, just smacks of blackface or...something ugly. But, I am a white guy proselytizing on elements of the Black experience, so.......