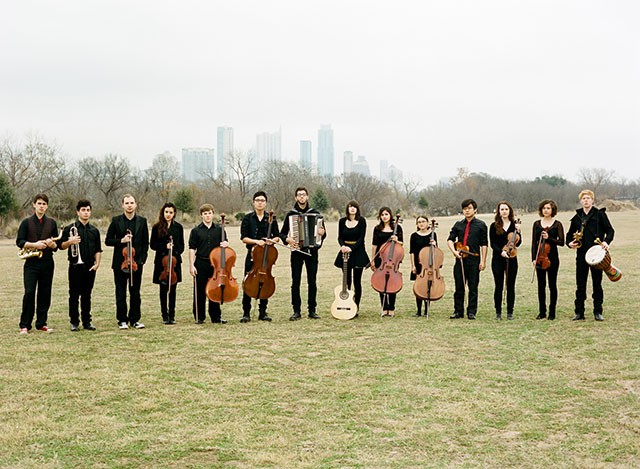 Some classes take exams, others presentations. The assignment for the students in UTSA’s Music Marketing program? Throw a concert.

“The goal for us in the program is to work with professionals in the industry,” said UTSA Senior Michael Kelly. “Basically, to get our feet wet with show promoting,”

Kelly and his classmates will present the collective fruit of their labors on Wednesday at UTSA’s Recital Hall. On the bill for the show are Los Angeles’ Ernie Halter, a singer-songwriter with a penchant for Jason Mraz-inflected coffee-house crooning, and the Austin-based orchestral indie outfit Mother Falcon.

“This is the first time we’re bringing more alternative acts,” says Kelly. “We wanted to purposefully choose a band not a lot of people have heard of and hopefully expose a lot of people to their music.”

Not that Mother Falcon may be relegated to an unknown for long. Managing to break through the often impenetrable SXSW milieu this past March, the massive band (18-members strong at present) grabbed national attention from the influential likes of NPR Music. And with a second album and national tour in the works, their trajectory seems sure to continue tilting upward. Having been exposed to their first record Alhambra, fellow UTSA Senior and show coordinator Jordan Nickerson was sure Mother Falcon were the right band for the bill.

“We had to present the concert in the recital hall, and I was trying to think of what would represent that aesthetic well,” said Nickerson. “I didn’t feel like a traditional rock band would come off right, but I thought a more orchestral act like Mother Falcon would fit well. It’s definitely something interesting and unique — from their arrangements to the chord changes, they’re very substantive.”

While Mother Falcon’s size may visually call to mind the small mob mentality of the Polyphonic Spree, in sound the band hews more closely to the orchestral sweep of Godspeed You! Black Emperor and the chamber pop of the Arcade Fire.

“The sound is clean, well-rehearsed and vibrant,” said Nickerson. “Being in such an intimate setting [like the recital hall] with such a powerful group is going to be an incredible experience.”

Though corralling a band the size of an army squadron is by no means an easy task, band ringmaster Matt Puckett emphasizes that Mother Falcon is no exercise in excess or coordination.

“No one in the group is a hired gun,” said Puckett. “Some of us go back as much as 20 years, and everyone is close. And though the lineup changes, [the band] is a group effort. It’s not like there’s just a bandleader handing out all the parts — everyone contributes.”

“We haven’t done too much out of town stuff,” says Puckett. “Even in a place as close to San Antonio, we didn’t want to deal with the herding if it wasn’t a gig we were going to get excited about. And this one got us pumped.”

For his part, Puckett is excited to be part of a show that promises to break from the usual Austin gig.

“It’s cool that this is a passion project, that these are students who really want to do a great job and put on something amazing,” Puckett said. “It’s very different from some guy on [Austin’s] 6th Street who books shows seven nights a week.”