The store is filled not only with vintage electronics but also inexpensive custom cabling and accessories, designed for budget-minded working musicians. 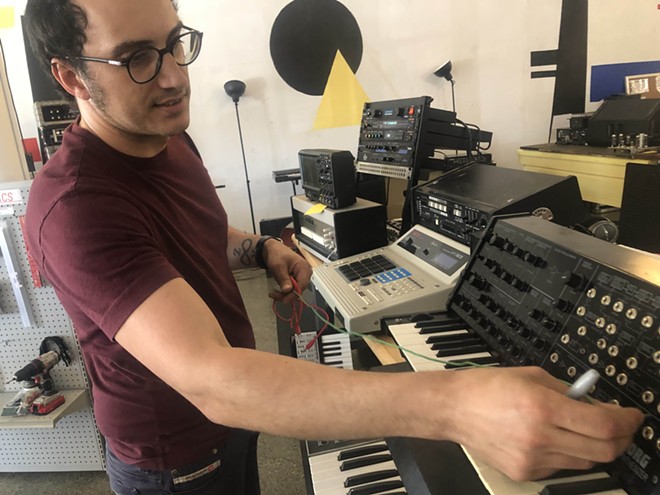 Bill Baird
Luis Faraklas Trevino shows off a vintage synthesizer on the floor of Output Audio, which also includes a recording studio.

A new retail shop tucked into a resurgent stretch of Fredericksburg Road's Deco District is vying to become a hub for San Antonio's creative music community.

By combining repair services, DIY electronics and vintage gear sales with electronic music workshops, shows and a recording studio, Output Audio is emblematic of a wave of creative, independent and optimistic SA natives working to reclaim the city and create the world they want to see.

"Our ethos is: make it happen, do it yourself and if you can't afford it, build it," owner Luis Faraklas Trevino said. "And even if you can afford it, build it! That's one thing that sets us apart as a repair shop. If something is broken and there's an expensive way to fix it or a creative way to fix it that'd be fun to explore, we opt for the latter. We take the creative route."

That creativity extends beyond standard repair work. The shop itself, and the shopping center housing it, are classics of Alamo City design. Trevino is clearly excited to put them to new use.

"This was the original Jefferson State Bank," he said. "And that back room where the recording studio is ... that's the old bank vault. Still got a six-inch concrete slab all the way around."

The shop's studio, dubbed Countdown Sound, is run by Michael Goodwin, who started the shop with Trevino.

"Above us was a 17,000-square-foot bowling alley," Trevino added. "It was converted into a ballroom at some point. And it's still there! A truly incredible space. It would be perfect for a venue."

Trevino isn't the only young entrepreneur who's latched onto the potential of that stretch of Fredericksburg.

The Woodlawn Theatre and its adjoining Woodlawn Shopping Center, built in 1946, have long felt like overlooked San Antonio gems in need of polishing. Not for much longer, though. Youthful energy is transforming the space. Hello Tallulah Vintage, Black Gold Bike Shop and recently opened music venue the Starlighter now occupy the complex, while Way Out Kombucha and Mexican snack shop Elotitos Corn Bar have sprung up across the street.

A recent concert at Countdown Sound by Oakland sound artist Evicshun felt like a turning point for the area, Trevino said.

"It brought in some of my favorite San Antonio musicians, like Diego from A.M. Architect," he said. "There was also a show next door at the Starlighter and, well, it felt like something was really happening here."

It's hard not to be struck by Trevino's openness and infectious enthusiasm. The eclectic business is clearly a labor of love, and that love shines in every detail — starting with an open layout and welcoming air of experimentation. All the instruments being sold are plugged in and ready to play.

"Bauhaus is a huge, huge influence on our design," says Trevino, pointing to the geometrical shapes painted on the shop's walls in primary colors. "And Matisse. My mom was an art major, so it's all embedded in my brain."

The family inspiration doesn't stop there. Trevino comes from a long line of San Antonio entrepreneurs.

"Growing up, my grandfather had an engineering business over on Woodlawn [Avenue]," Trevino explained. "He worked all over, even worked on the Tower of the Americas and Hemisfair. And on my dad's side, they ran Trevino Printing Press on the West Side for 60 years. I was a shop kid."

An accomplished bassist, Trevino came up in the San Antonio music scene, playing his first gig at the White Rabbit at the ripe age of 11. After receiving classical training and working as a jazz bassist for four years in New York City, Trevino moved back home. He was inspired by the changes taking place.

"When I came back, I fell in love with San Antonio," he said. "Just so much exciting creative energy in this city."

In starting Output Audio, Trevino modeled the vibe after the sadly departed and now legendary Krazy Kat Music. As a young musician, he spent hours in the shop shooting the shit with store employee and music-scene fixture "Bob Dog" Catlin.

"One time, I took him a fancy pedal I bought — he took it apart and showed me how it was a totally passive circuit," Trevino recalls. "That blinking light? It literally did nothing. It was a hoax. That really opened my eyes and stuck with me. I just loved the openness of Bob Dog and Krazy Kat. We want to do that here."

Output Audio is filled not only with vintage electronics but also inexpensive custom cabling and accessories, designed for budget-minded working musicians. Trevino's personal approach feels old-school, in the best way. It stems, he said, from his focus on community and family.

"What's cool now is that my nieces live down the street and they come hang out here after school. That's the apex for me — my nieces being excited to come hang out and learn something," he said.

Through his nieces, Trevino has learned the joys of passing his knowledge to the next generation by teaching classes at the Circle School and Young Woman's Leadership Academy.