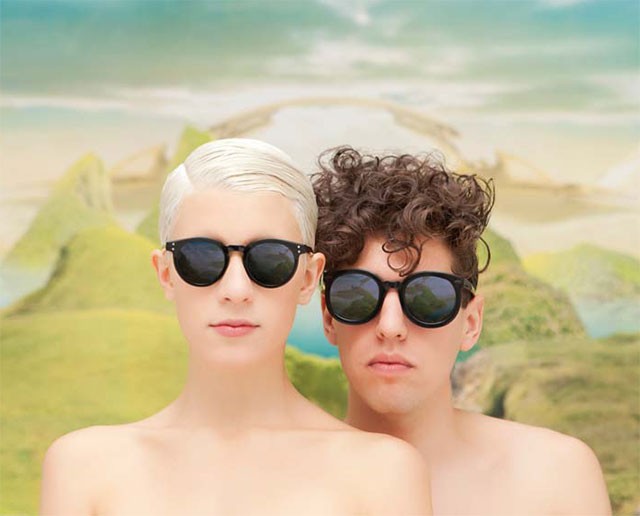 As the sun heats up in the mid-afternoon, don’t expect YACHT to wilt in the incipient spring heat. No strangers to Texas, the duo of Jona Bechtolt and Claire Evans has recorded their past two records in Marfa, a place they call “Actual Reality.” According to Evans, YACHT’s vigorous frontwoman with whom I talked over Gchat, “We have this theory that it’s Actual Reality there, and every other place on Earth is an illusion.”

The band lays claim to a variety of passionate beliefs, some more eccentric than others. YACHT stands for “Young Americans Challenging High Technology,” a digital DIY attitude testing the limits of creative software. “We always use software incorrectly, on purpose: We create rock show visuals in Keynote, we fuck with the parameters of our recording software, create images in video software, etc,” said Evans. “We use our computers like punk rock instruments.”

The duo disregards a variety of industry practices to remain true to their project’s integrity. According to stock standards, bands release singles, often free, as a teaser for an upcoming record. After the January release of “Plastic Soul” an 8-bit, automaton single on love and pain in the digital age, YACHT has no intention of following up with an immediate album. “We like to make songs and just release them into the world when they’re done,” said Evans. “We don’t like having to wait a year, until a whole album is finished, to share new material.”

Rather, Bechtolt and Evans treat their work as mantras set to music, making good use of the viral power of a pop hook. “Pop music and dance music are a great medium for transmitting ideas,” said Evans. “People listen to pop music on repeat, people feel something really powerful when they’re dancing. It’s interesting for us to juxtapose that kind of basic reaction with lyrics that transmit some deeper, weirder messages.”

Among those messages are visions of utopia and dystopia and the freedom of information, as expressed in their timely 2013 single, “Party at the NSA.” “It’s everything,” said Evans, “We wouldn’t be where we are—as people and artists—if we didn’t have access to tools and ideas that the internet has given us. For us, the internet is an extension of the many DIY spaces and clubs we grew up playing shows in, a safe space to experiment and connect with others. We don’t like the idea of that really important, formative place turning into a site of surveillance and control.”

In their 2009 book, The Secret Teachings of the Mystery Lights, Bechtolt and Evans articulate an understanding of music online as somewhere between art and information, loosely based on the work of philosopher Walter Benjamin. “In our book, there’s this idea that once a work of art is in the public space, it doesn’t really belong to you anymore. It loses its aura the more it propagates and becomes something else—something like a collectively held idea.”

Putting this idea into practice, YACHT aren’t opposed to music piracy, though of course they prefer fans purchase their work. “We believe that people don’t pirate out of malice,” said Evans, “they do it because it’s the path of least resistance, and because they want to be part of the cultural conversation.

As artists, we want people to have access to our work. It’s tricky when it comes to making a living, but we keep a low overhead.”

YACHT’s greatest achievement thus far has been merging these challenging concepts with a charming pop presentation; yes kids, you really can learn and have fun at the same time. They’re a sincere and light-hearted pair, personally answering questions on their website, recommending good reads and keeping their crowds dancing. If you enjoy the set, don’t be shy, send an email or go start a dialogue ranging anywhere from the Online Freedom Act to the importance of the disco beat.