Former Councilman Mike Gallagher and Ezra Johnson, who twice ran against Perry, have both filed. 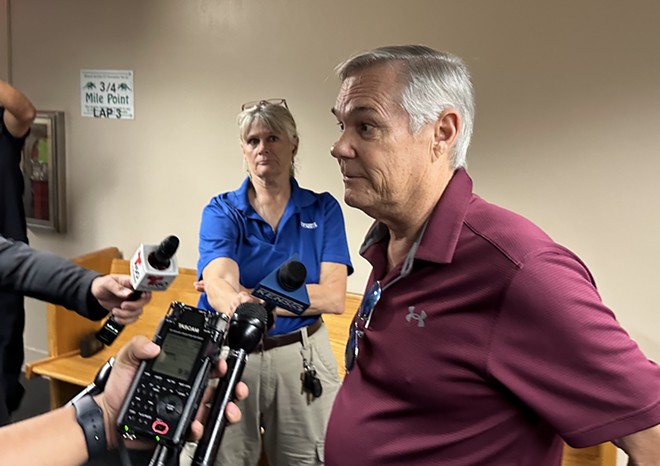 Michael Karlis
District 10 Councilman Clayton Perry speaks with reporters shortly after he posted bond for his arrest.
Eighteen residents from District 10 — including a former city council member and a previously unsuccessful council candidate — are vying to fill the seat left temporarily vacant on the deliberative body by Clayton Perry, the Express-News reports.

Perry was granted a leave of absence from city council Nov. 14 following an arrest for his alleged involvement in a hit-and-run automobile crash.

Among those who filed to fill the vacancy is former District 10 City Councilman Mike Gallagher, a retired Air Force colonel who served on council until 2017, according to the Express-News. Gallagher said he won't run for the seat during city elections in May and that he won't accept the council salary of $45,722, the daily also reports.

Another familiar name on the list is Erza Johnson, who ran against and lost to Perry in 2017 and 2021, according to the Express-News. Johnson is an energy attorney and former administrative law judge. Also, he once served as a VIA Metropolitan Transit trustee.

Three of the 18 candidates will be selected as finalists during council's B Session on Wednesday. Council will then interview the three contenders Thursday during a meeting open to the public.

If one of the candidates gets six or seven votes, they will be sworn in on Dec. 12, according to KENS 5. However, if one of the three finalists gets a super majority of eight votes Thursday, they'll be sworn in immediately.