San Antonio's mayor sat on a crucial report while the urgency of the city's climate planning increased. 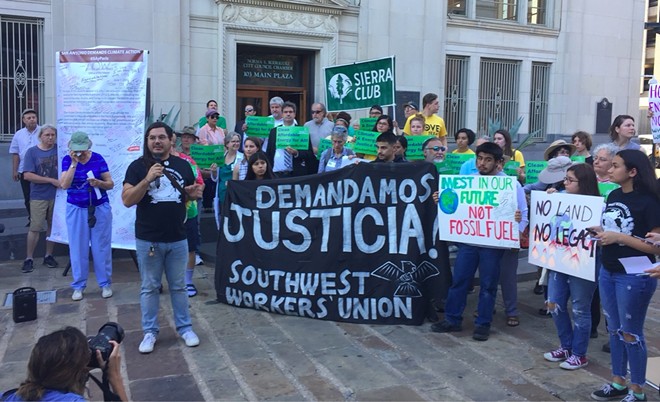 After decades of international efforts intended to slow and reverse global climate emissions, industry and governments around the world released more heat-trapping gases during 2021 than at any point in history.

And with Congress deadlocked on critical issues like a Green New Deal, the religious cult known as the U.S. Supreme Court recently voted to confound federal efforts to regulate climate-warming pollutants in power production.

While we will remain harried — until voters decide otherwise — by Christofascists in Austin who view fossil fuels and fully loaded automatic weapons as the pinnacle products of religious freedom, cities like San Antonio should now consider themselves the de facto leaders in responding to the global climate crisis.

"That's why the Supreme Court decision is so disheartening, because this is a national issue," said Doug Melnick, San Antonio's chief sustainability officer. "When you start talking about what really needs to happen locally around energy infrastructure, transportation infrastructure, I mean these are major investments that are going to need federal support."

Minus that support, what chance do we have?

None of the key elements of San Antonio's Climate Action and Adaptation Plan have advanced due to the confounding influence of business elites and political leaders who are less than fully invested in rapid action.

The plan is intended to guide the city in reducing its share of the climate emissions responsible for global warming while better preparing residents for a world of ever-rising temperatures and increasing violent weather events. It was developed over two years by more than 90 volunteers. For the sake ot transparency, it's worth noting that I served on the plan's steering committee.

"I don't think I want to say the mayor hasn't done shit, other than passing the [Climate Action and Adaptation Plan]," said Russell Seal, a longtime engaged member of the local Sierra Club. "But the CAAP has been meaningless. We've had, as far as I can tell, zero implementation."

Efforts to improve energy use in buildings through a mandatory "benchmarking" initiative have been rejected by business leaders and San Antonio City Council's conservative wing. Attempts to change building cs to smooth the way for electric vehicle and rooftop solar adoption have been delayed for three years by members of the building community — members who were just put in charge of a code super committee. Funding challenges and a lack of political will have limited any major transformations of public transportation options. And cleaning up the power supply at CPS Energy remains a work in progress.

So far, the only major plank to advance has been a rebooting of a moderately aggressive energy efficiency program previously known as the Save for Tomorrow Energy Plan, or STEP.

"All the components are there," Melnick said. "The challenge is we don't have a lot of time and we're experiencing [extreme weather] now." 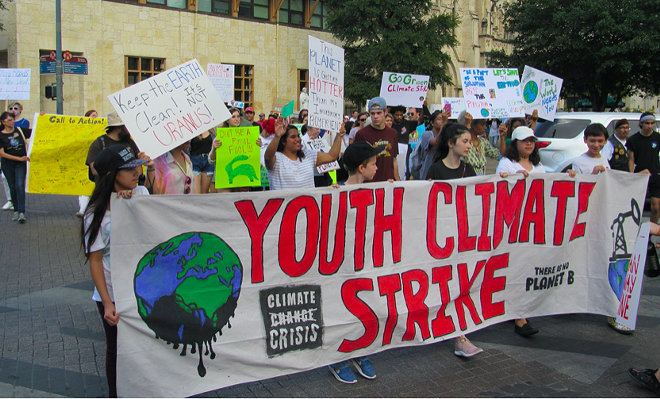 In the buildup to the climate vote, Melnick often warned of forecasts showing that San Antonio would see 90 more days annually over 100 degrees by 2100. Last month saw 17 such days, for a total of 28 this year, and set a string of heat records.

Since the deadly grid collapse during 2021's Winter Storm Uri, a growing gap of the population can't keep up with their escalating bills, driven largely by spiking natural gas costs. Yet during our climate maelstrom, Mayor Ron Nirenberg apparently sat on a critical report for five months — even shielding it from his colleagues on the CPS Energy Board of Trustees — that all but begged for an immediate and public correction of important energy information that the analysts claim had been mischaracterized by the utility.

The report also accuses CPS of downplaying the benefits of energy efficiency programs contained in STEP. What's more, it argues that the utility limited coal-retirement scenarios to "suboptimal" choices that would create some of the worst cases for transitioning off of coal.

The analysis called on Nirenberg and CPS Energy to immediately and publicly correct the record. That didn't happen. Early investigation into the document's origin and chain of custody suggests that no one outside of Nirenberg's office even saw the report for another five months.

It's unclear when exactly the paper was passed from the mayor's office to former city councilman Reed Williams, who Nirenberg tapped to lead the utility's Rate Advisory Committee (RAC). But it was sometime in May, Williams said.

"When I got it, I wasn't told it was confidential, so I didn't treat it that way," Williams added.

Williams passed it along to some RAC members, including, apparently, investment advisor Dana McGinnis, who shipped it off by email on Wednesday, June 22, with a lengthy complaint. CCing the entirety of the RAC, all city council members and the CPS Board, McGinnis wrote: "Whoever commissioned the report should be known. ... Why has this report not been brought to light since it brings up many of the questions RAC has posed to CPS management and to RAC for possible discussion?"

"Who knows if CPS could have done anything about the rapid rise in gas prices that has affected so many customer bills, but we never had serious discussions about the risks that were apparent in December and have now come home to roost in June," McGinnis wrote. "This failure is irresponsible of management and of council."

CPS trustees first touched on the document's findings in their June 26 board meeting, more than six months after its apparent delivery to the mayor, when former board chair John Steen complained to staff that he first received the report "over the weekend."

Acting CPS CEO Rudy Garza said he first saw it only a couple of weeks before Steen. "Our staff just kind of got wind of it and are just starting to take a look at it," he said.

Given the nature of the document, Steen was uncharacteristically mild, and the conversation was brief.

Relative newcomer Trustee Francine Romero hit back at Steen's complaint during the meeting, saying it wasn't "fair" to "call staff on the carpet" over a report they didn't commission. She shifted the conversation away from the document's origins or recommendations by downplaying the significance of the 2021 Resource Plan criticized by the Rocky Mountain Institute.

"I don't think there's any big bombshells so much," she said.

No one asked fellow board member Nirenberg why he apparently kept the report from them while the community vigorously debated the future of key energy programs that Rocky Mountain Institute said had been seriously mischaracterized by the utility's own leadership.

Closing the discussion, Nirenberg only offered that the report "was based on no new data" and was "one of the deliverables from the American Cities Climate Challenge [intended] to help meet the CAAP goals."

He didn't respond to two messages from Deceleration about the matter.

For those deep in the work of climate justice, Rocky Mountain Institute's findings are a vindication of years of sustained outcry over CPS Energy's presentation of basic energy realities.

When the CPS board advanced in May a modest STEP program of $70 million per year to reduce energy use by 1% annually, they did so without the benefit of Rocky Mountain Institute's analysis.

That followed months of dialogue in which community members repeatedly demanded to know how the utility was quantifying the costs of STEP while failing to calculate its many benefits. Residents were told that an answer was forthcoming. The Rocky Mountain Institute analysis is the closest thing to an answer we've received.

The stranding of the report in the mayor's office for so long is emblematic of a political leadership that sets agendas in motion but quickly allows their capture and co-option by the local business interests.

In February, a small breakthrough at CPS Energy's Board of Trustees was achieved when board members acknowledged for the first time that they were bound by the CAAP's 2030 interim greenhouse-reduction goal and directed the RAC to prepare a recommendation for closing the utility's JK Spruce coal plant by 2030. However, debate within the RAC has largely been limited to a proposal to close one coal unit while converting the other to run on gas.

Belmares said not having access to the Rocky Mountain Institute's findings about the benefits of STEP, for instance, needlessly clouded debates about the program before its council vote.

"It would have helped people to better understand how critically important it is to have energy efficiency programs and alleviate the concerns about the bill impacts of having to shut Spruce earlier than planned," she said. "We have to do everything we can to reduce demand."

RAC chair Williams said he didn't focus much on the Rocky Mountain Institute report when he received it in May, even as members of the RAC struggled to come to a consensus on the importance of STEP ahead of a council vote.

Like Romero, Garza and Nirenberg, Williams sought to shift attention away from the document. Most of those culpable for the Resource Plan's issues have left the utility already anyway, Williams said. What matters, he said, is the RAC's work modeling a way off of coal power.

"We can go back and replay that game, but the game I'm worried about is the game we're going to finish up in November," Williams said. "I'm trying to get it right. I'm not sitting here trying to kick people in the ass."

Garza told the board he wasn't prepared to say how the utility will respond to the report's findings. But Belmares said the Rocky Mountain Institute report will help the RAC chart a course for early coal retirement due to be completed by the end of this year.

"This report will fill in gaps of knowledge that CPS Energy is not giving RAC members because they are not doing the resource planning process right," she said.

Greg Harman is a longtime journalist who worked as a climate organizer in San Antonio from 2017 to 2021. He is the founder and editor of Deceleration.news, an online environmental journal of news and analysis. An extended version of this story is available on the site.