A Promising Start for the Spurs, a Reality Check for Warriors 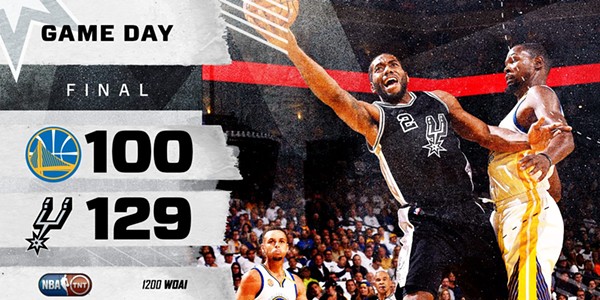 screenshot, facebook.com/spurs
The signing of Kevin Durant transformed the narrative around the Golden State Warriors from that of a historically dominant team that had come just short of a title to, somehow, something greater. It heralded their new, perfectly overlapping array of superstars and suggested the potential for them to reach even loftier heights in the 2016-17 season.

That gaudy talk carried on into opening night, when the Warriors were expected to unleash hell on whomever they happened to be facing first.

It didn’t matter that the opponent was the San Antonio Spurs, a team who, despite losing the face of their franchise over the offseason, was coming off a 67-win season and a summer when they’d signed All-Star center Pau Gasol.
A Warriors victory seemed even more likely when the Spurs announced they’d be without starting shooting guard Danny Green – out for three weeks with a hamstring injury – pushing Golden State to nine-point favorites in Vegas.

Indeed, the Warriors got big performances from three of their big four, but you wouldn’t know it by looking at the final score. San Antonio went up early and never looked back against the presumptive future NBA champs, winning in convincing fashion, 129-100. It was the second-biggest opening-night victory in Spurs franchise history (they thumped the Mavericks by 41 to open the 1991-92 season).

It was also a dominant performance by the Spurs across the board. They exploited their size advantage early and often, out-rebounding the Warriors 64-41 (including a 21-8 edge in offensive rebounds), while significantly outshooting the hosts from three-point range (50 percent to 21.2 percent). Kawhi Leonard alone made more free throws than the entire Golden State team, hitting all 15 of his attempts.

Leonard had a career night and was, hands down, the best player on both ends of the floor. The two-time Defensive Player of the Year took advantage of the Warriors’ sloppy play to the tune of five steals. Those included a pair of takeaways from MVP Steph Curry, one of which he took the other way for an emphatic one-handed dunk to end the third quarter.

But it’s on the offensive end where Leonard showed his continued growth as a player, creating opportunities for himself and his teammates and getting to the free throw line at will. The 25-year-old put up a career-high 35 points, a number that could’ve been higher had this game been closer.

One big reason it wasn’t close? Leonard got help – lots of it. LaMarcus Aldridge was the perfect complementary star, knocking down 18-footers and owning the paint. He finished the night with 26 points and 14 rebounds. Patty Mills and Manu Ginobili both scored in double figures, combining for seven assists and five three-pointers and making up for an off night from Gasol.

This was always going to be a bad matchup for the Spaniard, who didn’t score again after knocking down his first and only bucket two minutes into the game. The Warriors like to play small and attack lumbering bigs, which is precisely what Curry did whenever Gasol was on the floor. Fans shouldn’t worry too much about his underwhelming debut, although it’s not likely he’ll ever be all that effective against Golden State.

On a night that had far more positives than negatives, the greatest revelation was undoubtedly second-year player Jonathon Simmons, who went off with 20 points off the bench. Last year, the athletic wing had trouble even cracking the rotation last season, but it’ll be difficult for his role not to grow after a performance where he was seemingly everywhere, making plays that quelled a number of Warriors comeback attempts. San Antonio’s ceiling may depend on how good its supporting cast can be, and Simmons is an intriguing piece to that puzzle.

The Spurs won’t always be as sharp as they were in their season opener, and the Warriors will likely be on the other end of blowouts soon enough. It’s October, after all, and there’s no sense in reading too much into wins and losses at this point. What last night does underline, though, is how little we all know about this team (both, really) and that learning just how good they can be will be lots of fun.