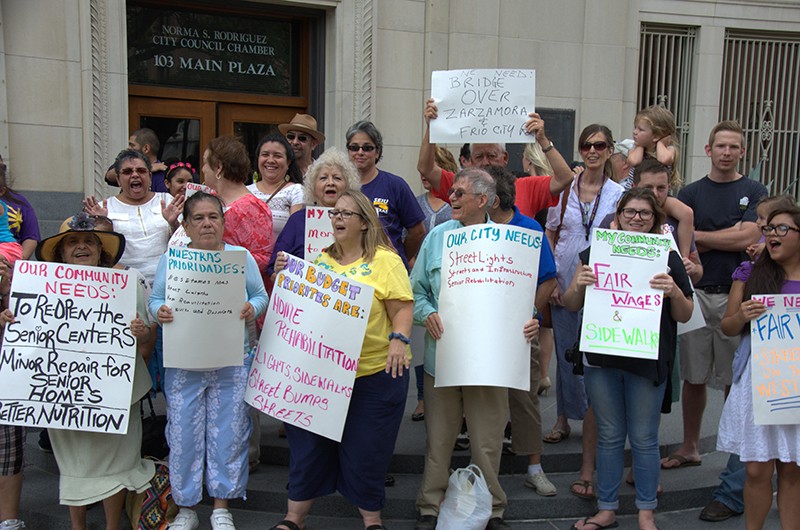 Mary could keep her ceiling from caving in — if she made $2 more per hour.

The 68-year-old, who asked that her last name be omitted for fear of reprisal from her employer, earns $8 per hour as a home health care worker.

Half the ceiling collapsed in a room at Mary's West Side home. The whole roof is riddled with holes. As if that wasn't enough, her 1979 Ford Explorer barely chugs along.

But she lives with it. With no savings and no other breadwinner in her family, Mary's money runs out each month after she pays for basics like keeping the lights on and the water running.

The roof's holes get a little bigger, the car whines louder.

"I paid bills yesterday, I had a dollar left. That's money to support myself until the next pay day," Mary told the San Antonio Current. "I'm trying to make ends meet ... and I can't do it."

Over 350,000 people in Texas earn the federal minimum wage of $7.25 per hour. Another two million workers, like Mary, earn less than $10.10 per hour, according to the Center for Public Policy Priorities, a left-leaning think tank. That's the amount some Texas lawmakers and the Obama administration want to set as the new minimum wage.

If Mary lived in Seattle or San Francisco or Chicago — major cities that approved ordinances raising the minimum wage above $10 an hour — she might have repaired her house and car by now. But she lives in San Antonio, where the hurdles for increasing wages are much higher.

Texas law prohibits individual municipalities from raising the minimum wage on their own.

So living wage advocates in San Antonio have adopted a different strategy to raise wages: target campaigns to public entities like Bexar County, the City of San Antonio and school districts in order to apply pressure to the private sector.

'A Matter Of Social Justice'

Communities Organized for Public Service and the Metro Alliance, or COPS/Metro, one of the leading wage advocacy groups in San Antonio, started its living wage campaign about a year ago. The goal is to raise hourly wages for public workers to at least $14.91 — the average amount needed for a family four to stay off government assistance such as food stamps.

Father Mike DeGerolami, pastor of St. Timothy Catholic Church and a member of COPS/Metro, said the group maintains that "if you're working full time, especially for a public entity ... you shouldn't have to seek public assistance."

The idea of targeting public workers, according to DeGerolami, is to "kick the conscience of private employers" and force them to raise wages by incentivizing public work.

That argument resonated with Bexar County Judge Nelson Wolff. He and other county commissioners announced earlier this month that they would look into boosting pay for county employees.

Minimum wage for county employees is currently $11.67. The Commissioners Court will try to raise it to $13 per hour next fiscal year.

Wolff said that the court's motivation to raise the wage was ultimately "selfish."

"We're down to 3.4 percent unemployment and finding good workers gets harder and harder. If you're willing to pay them a decent a wage, it's easier to find good talent," Wolff said.

The raise would impact about 400 workers and cost about $1 million. But Wolff cautioned that the court didn't make a binding agreement with COPS/Metro — only that the county would escalate wages if it fit into the budget. The county will finalize the budget in September.

"We told them we would try to step forward," Wolff said. "But we've got to vote on the budget."

COPS/Metro officials hope that wages for county workers will rise to $15 per hour within three years.

Groups such as COPS and Service Employees International Union have also set their sights on wages for City of San Antonio workers, who now make a minimum of $11.47 per hour.

It's a significant portion of the City's $2.4 billion annual budget, but no less important than pet projects such as the $41 million renovation of the Alamodome that City Council approved earlier this year, advocates argue.

Buddy Villejo, a 63-year-old who has worked for the city in various capacities for nearly four decades, said at a SEIU rally at City Hall last week that his wages were adequate, but he was concerned about his fellow municipal workers.

"I'm not hurting, but I'm on the downside [of my career]. I'm worried about the people we left behind," Villejo said.

For the time being, advocates must rely on their own effort to raise wages, as proposals to raise the minimum wage statewide failed during the most recent legislative session.

Lawmakers filed several bills to do so, with Rep. Trey Martinez Fischer, D-San Antonio, spearheading the most promising effort. He proposed a constitutional amendment to raise the state's minimum wage to $10.10, mirroring the Obama administration's proposal from last year.

As he watched other states and cities raise wages in the run-up to the 2015 legislative session, Martinez Fischer thought that Texas, with more minimum wage earners than any other state, should be next.

"I figured that the time was right for Texas to be in that conversation," Martinez Fischer said. "This would have had an immediate impact on our workforce.

Although he thought his pitch resonated with liberal and conservative lawmakers alike — particularly the argument that the higher a person's income, the less reliant they are on government assistance — Martinez Fischer's measure died on the House floor.

Even if it had passed, the measure would have still required ratification statewide by voters in November. But nationwide, there seems to be popular support for it: a recent poll by the New York Times/CBS News found that 71 percent of adults favor upping the minimum wage to $10.10.

Jon Fisher, president of Associated Builders and Contractors of Texas, represents one of the groups that opposed Martinez Fischer's measure. His position is that the government shouldn't set a minimum wage at all — much less increase it.

"Our group does not believe that the government should be involved in employer/employee relations, period; it should be determined by the marketplace," Fisher said. "We have just struggled with so much government intrusion ... we felt like any additional intrusion is something we are not going to support."

A study by the Congressional Budget Office showed that raising minimum wage to $10.10 would lift about 900,000 people out of poverty. But it could also result in 500,000 people losing their jobs with the tightening of employers' profit margins.

Martinez Fischer said he'll continue to lobby his colleagues, but a new statewide proposition to raise the minimum wage can't come until the legislature convenes again in 2017.

Until then, Mary will continue to work, living paycheck to paycheck.

"I just work, live from day to day. With my financials, I can't live comfortably," she said. "It's hard, but that's what it is."