An information packet handed out to attendees of a Wednesday meeting contained a footnote appearing to question the math of the revenue projections. 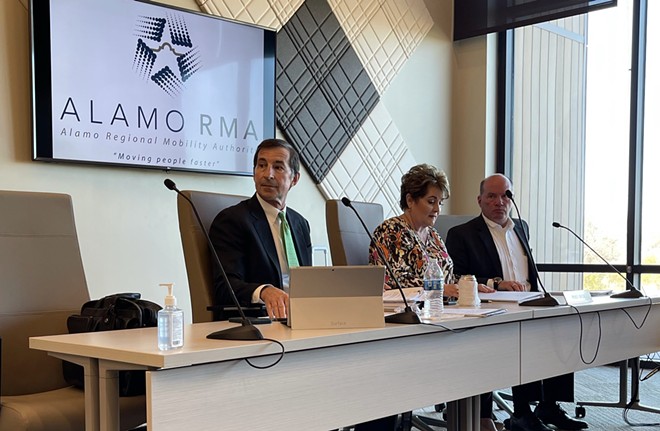 However, a document the authority distributed at afternoon meeting didn't exactly hit that target. Instead, a footnote raised doubts whether the proposed project would hit its promised revenue target.

During Wednesday's presentation, Alamo RMA board member Renee Green said the tunnel — which would ferry passengers from the airport to downtown via Tesla vehicles — would generate $25 million in annual revenue for the authority.

However, a printout of the slideshow handed out to attendees suggests Alamo RMA attorney Brian Cassidy was skeptical of those financial projections.

On slide 17.b, which wasn't included in Green's slide presentation, a footnote casts doubt on the tunnel's ability to generate the projected $25 million. Cassidy's name and the date May 4, 2022 appear under the footnote, as if in attribution.

Michael Karlis
Alamo RMA attorney Brian Cassidy's name appears under a footnote that questions whether the tunnel could yield $25 million in projected revenue.

The 10 million appears to be referencing the RMA's estimate for how many passengers fly in and out of San Antonio International Airport annually. During the presentation, Green said the cost of one-way trips from the airport to downtown on Boring Co.'s Teslas would not exceed $12.

Michael Karlis
In the Alamo RMA's presentation, board member Renee Green said the mobility authority anticipates 10% off all passengers at San Antonio International Airport would take the tunnel with tickets running $10-$12.

From the footnote, it appears that Cassidy concluded that even if 10% of all passengers flying in and out of the airport used the tunnel, as suggested by Boring Co., the total revenue, not including maintenance or other overhead fees, would fall short of the $25 million the Alamo RMA hopes to collect.

The Current previously reported that at $5 per ride — cheaper than an Uber — an astronomical 67% of passengers at SAT would be required to use the service for it to hit revenue projections.

"The little note at the bottom of page 17 said that the money is based on just one way," Light said during a public comment period during which she peppered the board with questions about the potential shortfall. "You'd have to have people taking round trips to make that kind of revenue from this [project]. Look at that little note."

Board members thanked Light for her concern but didn't respond to her questions. After that, they quickly moved to take the meeting into a closed executive session.

A communications liaison from Alamo RMA then told several attendees that they had "grabbed the wrong packet" and handed out alternate copies without explanation. The Current didn't obtain one of the alternate copies.