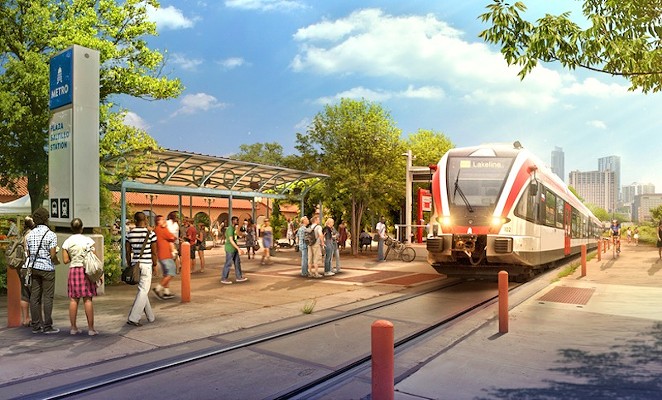 Courtesy
Two decades in the making: Will the dreadful SA-Austin I-35 commute be alleviated with a new rail line?

Anybody who has driven between San Antonio and Austin knows full well that between crazy drivers, accidents and traffic, chances are you end up wanting to pull your hair out.

Could all that soon come to an end?

Well, no. But odds are good that the experience could at least soon turn more pleasant.

The remedy has been in the works for more than two decades but it's just now apparently coming to fruition. The proposal is for a commuter train running through Central Texas – starting in San Antonio – that could divert 10 percent of I-35's weekly traffic, according to Joe Black, Lone Star Rail District director.

That'd mean 18,000 fewer cars off one of the country's most congested roadways.

The Lone Star Rail District is a public agency without taxing authority created by the Texas Legislature in 2003 – the main driver of turning the commuter rail concept from theory into reality.

No easy task, given that the idea was for years a pipedream.

But if San Antonio City Council approves a line-item budget amendment this month of nearly $500,000 for the rail district, the envisioned line between San Antonio and Georgetown will finally seem on track.

"San Antonio's support will allow us to accelerate the public-private partnership," Black told the San Antonio Current. "We want to be ready to award a contract after the environmental impact statement decision."

That process started last year and should be completed in 2017. 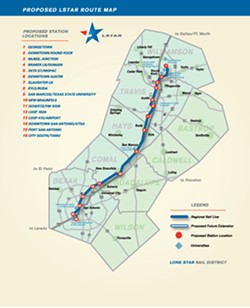 The rail line – which would run on existing Union Pacific tracks running parallel to I-35 – would have split funding: One-third from San Antonio, another one-third from Austin and the rest by smaller cities along the route, such as San Marcos.

"All the work has been done using federal and state grants at this point ... those run out after awhile," Black explained. "It's never a sure thing that you're going to get several million dollars laid on you when you ask."

Lone Star Rail has also asked Bexar County and VIA Metropolitan Transit to allocate $500,000 toward start-up costs as well.

However, the rail district's current funding plan has a $44 million gap.

Peter Zanoni, a San Antonio deputy city manager, said the rail agency is asking the city for a 36-year funding commitment to be met in part using property taxes.

The city is behind the project but is taking a cautious approach, leaving itself an out in case leaders decide they don't like the way it turns out, Zanoni said.

But say everything does go according to plan. Even then, we're talking years in the making.

"It's not as far as people think it is," Black said, adding that if the environmental impact statement comes back by 2017, design would start in 2018 and construction could begin in 2019 or 2020.

"I think it would take between two and three years to do the entire thing," Black said.

A commuter train connecting San Antonio to the college enclave of San Marcos and various smaller cities in between would drastically change the face of transportation in South Central Texas, allowing college students to easily move through the corridor and provide work commuters a way to avoid seemingly constant road nightmares.

"It would do a few really beneficial things for commuters," Black suggested. "It's a lot more reliable than the highway. It will actually be faster during peak times to take the train than to drive."

He also pointed out that multiple universities are just one to five miles away from proposed stops, which would be served by a shuttle system.

"There are 300,000 students, faculty and staff that could take advantage of that transportation mode," Black said. "It's not a panacea, but it can do a lot to change how think about living and working."

"I think we're closer now than we've ever been and I think we've had more people being serious about it," Viagran said.

One of the planned hubs for the commuter train would be on the South Side near Texas A&M University-San Antonio. Students could take the train all the way to Georgetown, with stops at UTSA's downtown campus, Loop 410 at the airport, Texas State University in San Marcos and downtown Austin.

"This will open up opportunities for students to go to Texas State and back-and-forth up the line," Viagran said. "It will open up ... freedom of mobility to get from the southern sector to downtown to north of San Antonio in just a matter of minutes without concern," she added.

It has been a slowly evolving project involving many moving parts, but it now seems closer than ever to actually getting off the ground.

"We know it's long investment," Viagran said. "But it's an investment for generations."