An interview with 'A Surprise in Texas' director Peter Rosen

After following the Van Cliburn International Piano Competition for the last 20 years, filmmaker Peter Rosen felt he had the intuition and experience not only to document the event for the fourth time in his career, but to make a film he could release theatrically for the very first time. 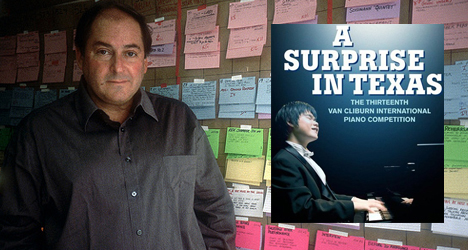 Held every four years and considered the most prestigious piano competition in the world, the Cliburn is the center of Rosen's documentary A Surprise in Texas (read Jeremy Martin's review here). The film follows a group of young pianists who competed in the 14th annual contest held in Ft. Worth, Texas in 2009.

Introduced to the Cliburn in 1989 when he was asked to film the 8th Annual event for PBS, Rosen won an Emmy for the documentary, which featured Russian-American pianist Alexei Sultanov as the champion. Rosen would return to Ft. Worth to shoot the 9th Annual competition in 1993 and 11th Annual competition in 2001 before returning last year for his 20-year anniversary.

During our interview, Rosen, who has filmed a number of musicians during his career such as Leonard Bernstein, Yo-Yo Ma, and Olga Kern, talked about returning to the Cliburn for the fourth time, how technology helped change the way he made this film different from the others, and what it was like when he heard Nobuyuki Tsujii, a 20-year-old blind pianist from Tokyo, Japan, play for the first time last year.

A Surprise in Texas is currently playing at the Santikos Bijou Theater.

With so many different types of music competitions in the world, what drew you to the Cliburn?

Yes, there are a lot of competitions. Some of these pianists go across the globe and go to a different competition almost every week. But there have been two major competitions over the last two decades: the Cliburn and the `International` Tchaikovsky in Moscow. The Tchaikovsky has had a lot of problems over the years. They found out some of the jury was corrupt. If you follow the news in Ft. Worth, you know the former head of the Cliburn has left the organization to try to revive the Tchaikovsky competition. Given the fact that the Cliburn remained the only major piano competition in the world, it was the obvious subject for a film. The Cliburn is always the award pianists aspire to win.

You shot the 8th, 9th, 11th and now 14th Annual Cliburns. Why didn't you come back to shoot them all since you knew the competition so well?

I'm not sure it would have been the healthiest thing in my career to keep doing every single Cliburn competition. Once you do one of them you have a challenge to figure out how to do another one four years later and tell a completely different story. You don't want to repeat yourself. I'm sure they wanted to experiment with different filmmakers as well to get a different approach in there.

How did you hope to make this one different then?

One thing is that the technology has changed. We now have very small high-definition cameras. You can do almost anything you want with them. You used to have to have a crew with large cameras, a sound man, lighting people, a grip, a gaffer. It would become very cumbersome and time consuming. These kids would sometimes be intimidated with all these people around. Now the technology is so good, we can have one-man crews. I shot all of Nobuyuki's scenes myself with a very small handheld digital camera. That opens up a lot of possibilities that you couldn't engage in before. After `the pianists` get used to you, they don't even know the camera is there.

How many cameras did you have during the performance scenes on stage? It seemed like you were filming the pianists from every angle possible.

We had six cameras in the music hall. One of those was called an Iconix. That's a little camera about the size of a tube of lipstick. You can mount that in the piano or wherever you want. We mounted it on the very last key of the piano. We got some great close-up shots with that camera.

What did you hope to show during the scenes where the pianists were not performing?

To me that's actually more important material than the performances on the stage. I think the viewers are there not to watch a concert and hear and see long performances, but to really get a sense of what the storyline is all about. We tried as much as we could to gain their confidence and get to know them so we could get more personal material. These people are from all over the globe. Some of them don't speak English at all. But just being able to see somebody having some private time is great. We had a great time shooting `Yeol Eum` Son — the woman from Korea who won second place — because she loved to exercise before the competition. We have great footage of her jumping rope and stretching and doing all of her Yoga-type exercises. It really tells you something about her character when you have material like that.

When did you first learn about Nobuyuki Tsujii? Did you plan to feature him as much as you do in the film even before the competition started?

I had heard about Nobuyuki before the competition when we were planning the shoot. Some of jurors were really impressed with the audition he gave in Ft. Worth. Once I realized he was supposed to be one of the real contenders and also was blind from birth, I knew that no matter how well he did in the competition we would have a pretty good subplot there. I felt there was a story there that transcended the usual music competition story. Because he was blind, I realized we had a bigger story and that it could be a film that could be an inspiration to people whether they care about classical music or not.

What was it like to hear him play for the first time?

I thought he was a great technician. I knew he had all the technical chops, but then when I heard his Chopin concerto I think I realized he was going to win because it was so sensitive and quiet and neat. I think he showed the jury that he had the capability to do that as well as all his technical performances. One of the jurors told me the Chopin concerto was so beautiful he had to leave the jury box to keep from crying.

There are probably a number of theories out there as to how Nobuyuki can do what he does, but do you have any of your own? How do you think he does it?

It's a mystery to me. There are things that go on in the brain you can't explain. There is a writer named Oliver Sacks who had a book out called `Musicophilia: Tales of Music and the Brain`. There's a chapter in there about blind musicians where in very rare cases the part of the brain that isn't being used for visual acuity is taken over by the rest of the brain and uses it to enhance the brain's comprehension of music. I'm not a neurologist, but that sounds like a good explanation of what happens with Nobuyuki.

Some of these piano competitions have critics who say there is really no way to fairly measure which pianist is actually the best. Do you think it is fair to judge these musicians? If so, why are competitions like Cliburn important to the world of classical music?

Yeah, some people ask, “How can you take something as personal as music performance and put it into a contest like sporting event?” Athletes can be measured by their time and strength, but a lot of people say you can't measure musicians that way. But I think it's very important because when these kids come to the competitions they really haven't had a chance to compare themselves to other pianists. They get a really good feel of whether or not they are going to be able to be good enough to go on with their career. Aside from the fact that a major competition win can open up a lot of doors for their career, it also lets them compare themselves to people their own age to see what their potential future could be all about.