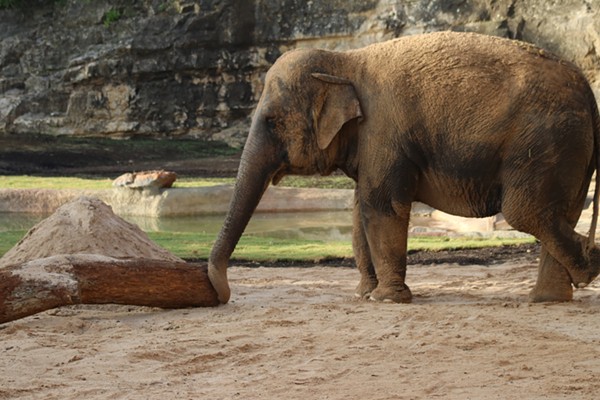 Last week, the zoo announced that it acquired Nicole, an Asian elephant, from Ringling Brothers. The news came as a surprise as zoo officials have long said the facility's other elephant, Lucky, prefers the company of people over other elephants.

“Nicole comes from a very controversial unit of the Ringling Brothers act, the Blue Unit,” One World Conservation CEO Karrie Kern says. “That particular unit was known to have been exposed to tuberculosis (TB), a zoonotic and particularly infectious and dangerous disease amongst elephants. We are concerned that Nicole may have a latent strain of TB that could become active down the road and infect Lucky and/or their keepers or other visitors in close contact at the zoo.”

"We have access to complete medical histories for both Lucky and Nicole. Neither Lucky nor Nicole have tested positive with tuberculosis, and there is no reason to assume that they have been infected," Carter said via email. "Our veterinarians and elephant care staff are following the recommendations and protocols set forth in the Elephant Husbandry Resource Guide, the AZA Quarantine Guidelines, and the AAZV Preventative Medicine Recommendations."

Carter says like all animals at the zoo, a team of animal care specialists, veterinarians and vet technicians provide the highest level of care for Lucky and Nicole.

One World Conservation's complaint also asks the USDA to conduct a full investigation into the health of Nicole, the acclimation between the two elephants, and whether Nicole was properly quarantined. The group is also asking the feds to investigate the exhibit space the elephants share.

The zoo has consistently maintained that complaints made by One World Conservation are false allegations.