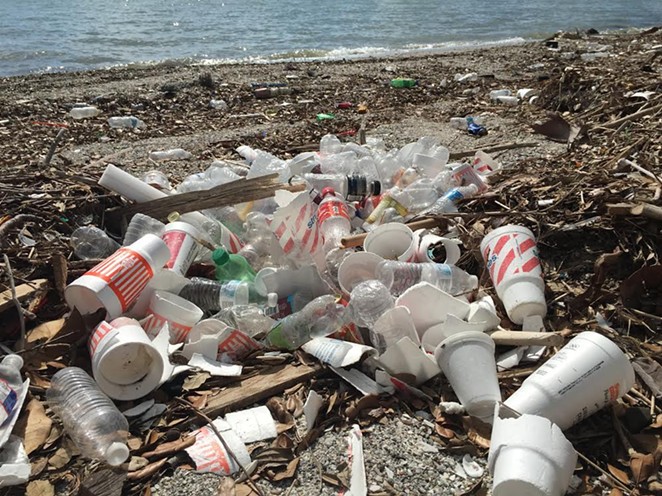 Neil McQueen
Non-biodegradable polystyrene cups lie strewn across the Corpus Christi Bay beach. (Notice those orange Whataburger cups?)
Whataburger's mustard-laden burgers may be mana and their ketchup worthy of its prime slot on H-E-B shelves, but some folks 'round these parts aren't so keen on the way the fast-food chain serves up its cold drinks.

"The industry is certainly moving in this direction, and it would be great to see Whataburger get out ahead and stop messing with Texas," said Luke Metzger, executive director of the Austin-based advocacy group.

In May, Metzger sent separate letters to Whataburger and Austin-based Thundercloud Subs asking them to nix the foam cups. Thundercloud said it's doing so by yearend. But Whataburger never responded.

So, Tuesday morning, Metzger and other activists will show up at company HQ to get an answer in person. If the visit doesn't yield any action, next up is a petition drive to convince officials that customers want to sip their sugary drinks from biodegradable containers.

Late Monday, Whataburger supplied a written statement saying it is "currently looking at cup alternatives that keep drinks at the right temperature." The company also said its Styrofoam cups (Styrofoam is a name-brand polystyrene) are recyclable and that encourages customers to dispose of them properly.


Whatever the burger chain's experiments with "cup alternatives" turns up, Metzger is right about the industry backing away from polystyrene. McDonald's, the grandaddy of all burger flippers, this year announced it's phasing out foam containers worldwide. Duncan Donuts recently said it will do so by 2020.
Americans pitch out 70 million foam cups daily, according to the EPA. That material doesn't biodegrade, meaning it just breaks down into smaller pieces that look super shitty strewn across beaches (see the photo above... eww...) and are deadly to wildlife. Scientists have found plastic fragments in hundreds of species, including 86 percent of sea turtle species and nearly half the sunfish in the Brazos River.