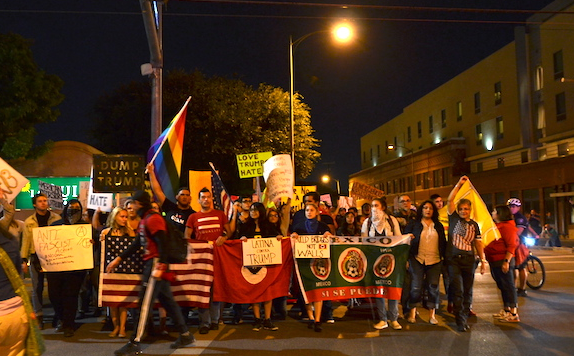 Of the 600 people who came out to protest Donald Trump’s election victory last night, some fifty were waving paper butterflies in the air.


“It’s to represent peaceful migration,” said a gray-haired man carrying a origami monarch butterfly. “Like butterflies, immigrants and refugees should be able to move freely across borders.”


This symbolism carried over to the evening event. The three-hour-long protest passed through downtown San Antonio peacefully, drowing out combative passersby with chants of “Love trumps hate,” and “Si se puede.”


This was night two of San Antonio’s anti-Trump protests following Tuesday’s election. Tourists stopped to take photos on their phones. Groups of Saturday night bar-hoppers cheered from the sidewalk. Cars honked, and their drivers waved peace signs as the marchers — one even blasted YG’s pre-election anthem “Fuck Donald Trump” from a rolled-down window.


“I’m here because I don’t know how else to express my frustration right now,” said a protester, who asked to remain anonymous. She carried a sign reading “Build bridges not walls”.


“It’s cathartic to be surrounded by people who share that frustration.”


Erick Licea came out to watch the protest, not participate. He understood where the crowd’s fears were coming from, but said their chants rang a bit hollow.


“I bet a lot of these people didn’t vote in the election. Now they’re realizing why it mattered,” Licea said. “To be honest, this isn’t white people’s fault. This isn’t Trump’s fault. This is the fault of the people who stayed home on election day.”


The only moments of tension between protesters and police came when the marchers overflowed from the sidewalks into the street, and officers with the San Antonio Police Department pushed them back onto the curb with their bikes.


“There are only three or four instigators out here tonight,” said Sgt. Bryan Patten. “It’s been otherwise calm. Most people aren’t out here to start anything.”


A few protesters were concerned about retaliation from aggressive Trump supporters. Earlier in the week, a Facebook group called the “Alamo Militia” had threatened to show up at the protest wielding guns to make sure it “remained civil.” While a few allegedly showed up at the previous’ night's protest, there was no sign of armed militia on Saturday.


Beginning at San Antonio City Hall, the march eventually wove through downtown streets to pause at the Alamo. One man, wearing a “Texas National” shirt stood by the Texas State Guards (the Alamo’s armed staff) holding a massive Texas flag on a pole. But, he said he wasn’t there to start a counter-protest.

“I’m just here to make sure they respect the Alamo,” he said.


The Alamo guards refused to comment on the event, but made sure to boot any protesters off the sidewalk directly in front of the Alamo. According to Sgt. Patten, the guards have the legal right to kick anyone of the Alamo grounds without explanation.


“What about my life?” mumbled the man with the flag.