'There's a very specific, established path for invoking the Invasion Clause,' one expert said. 'You don't just do it in a tweet.' 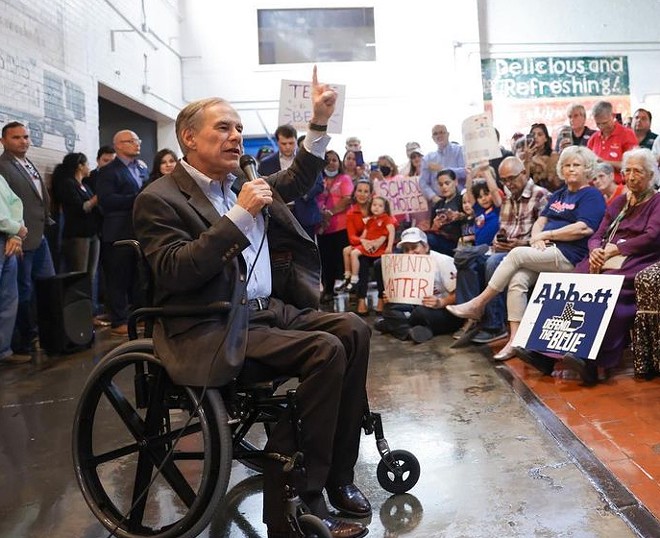 In 2019, shortly after a gunman slaughtered 23 people in an El Paso Walmart, claiming in an online screed that he was thwarting a "Hispanic invasion," Texas Gov. Greg Abbott issued a sort-of apology for invoking similar terms in a fundraising mailer sent out the day prior.

Abbott's mailer urged fellow Republicans to "DEFEND TEXAS NOW" from immigrants and "take matters into our own hands."

In true Nixonian style, Abbott eventually admitted "mistakes were made" in his fundraising letter. He also assured the media that he spoke to members of El Paso's legislative delegation to ensure "rhetoric will not be used in a dangerous way." Phew. Glad he cleared that up.

Fast-forward to November 2022, however, and Abbott has fully embraced the I-word with zero fucks given.

In recent weeks, he fired off letters to the White House and county judges describing the record influx of migrants as an invasion. He even tweeted that he'd "invoked the Invasion Clause of the U.S. & Texas Constitutions," something that theoretically allows him to defy the federal government on immigration policy.

Except that it doesn't, experts said. At least not when mentioned offhand via social media.

No shortage of racists popped boners when Abbott issued his tweet. But it didn't take long for the rest of the world to figure out that — like many of the governor's actions around immigration — it amounted to little more than a political stunt.

"I don't think it is a change in overall tactic as much as it is a reminder to all of Congress and into the members working the issue that this is serious," Sarah Hicks, the governor's budget director backpedaled on his behalf when the Austin American-Statesman asked her about the tweet.

The takeaway here, according to Sepúlveda and other analysts, is that Abbott is simply trying to keep up with the inflammatory rhetoric of Gov. Ron DeSantis as he weighs a 2024 presidential run — or he's simply looking to hurl red meat to his base after winning reelection.

Let's be clear, though. The hollowness of Abbott's tweet doesn't make his "invasion" rhetoric any less toxic. We'll see how soon the assclown is forced to issue another squirming apology following the deadly actions of a racist ideologue.

Let's hope the answer is "never," but the rise in far-right extremism gives little room for optimism.