Bad Takes: Donald Trump's Big Lie reeks of Orwellian 'doublethink,' and it's not a victimless offense

The consequences of the MAGA reality distortion field are deadly serious — especially if we want to remain a functioning democracy. 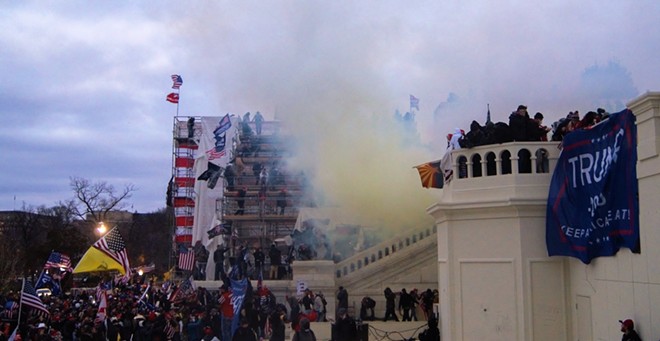 Wikimedia Commons / Tyler Merbler
Does Donald Jehovah Trump believe he received more votes in 2020 than President Joe Biden? Or did he just spout the Big Lie of a stolen election as a cynical ploy to stay in power?

There are two staples of Anglo American culture that conservatives can't seem to do without. The first is the Pledge of Allegiance, which most kids recite countless times before they graduate. The second is the British novel Nineteen Eighty-Four, which you also may recall from your school days.

What many conservatives don't know is both were written by avowed socialists: Francis Bellamy and George Orwell, respectively. Bellamy lionized the United States as a free, egalitarian republic. Orwell described a future dystopia ruled by torture and "doublethink." The pair of writings comprise, on one end, an aspiration, and on the other, a cautionary tale that could happen here — if we're not careful.

Orwell defined doublethink as "the power of holding two contradictory beliefs in one's mind simultaneously, and accepting both of them." Bingeing the Jan. 6 Committee hearings — the ninth installment of which wrapped up a couple weeks ago — I couldn't help but ask myself a simple question: does Donald Jehovah Trump believe he received more votes in 2020 than President Joe Biden? Or did he just spout the Big Lie of a stolen election as a cynical ploy to stay in power?

"The Party intellectual knows in which direction his memories must be altered; he therefore knows that he is playing tricks with reality," Orwell wrote, "but by the exercise of DOUBLETHINK he also satisfies himself that reality is not violated. The process must be conscious, or it would not be carried out with sufficient precision, but it also must be unconscious, or it would bring with it a feeling of falsity and hence of guilt."

More than half of GOP nominees on the ballot this November — 291 candidates in all — deny that Trump legitimately lost the White House. And some 70% of Republican voters continue to express the same sentiment, according to an aggregate of recent polls.

Yet there is no evidence of widespread fraud in the 2020 election. Judges, including those appointed by Republicans, have repeatedly rejected those claims.

That's why it's tempting to agree with Washington Post columnist Philip Bump. "For Trump, the issue was never whether the election was stolen, it was whether he could convince people it might have been," he wrote.

However, I disagree. It seems more likely that Trump and his most diehard supporters simply couldn't conceive of him losing, any more than Nineteen Eighty-Four's Party faithful could conceive that Oceania might not always have been at war with Eastasia.

And yet, Trump evidently planned to refuse to admit defeat regardless of the vote totals, which implies premeditation. How can someone conspire to steal an election, then instigate a mob to "stop the steal"? The suspicious absence of cognitive dissonance goes far beyond Trump himself.

One of Daily Show correspondent Jordan Klepper's interview montages with Trump rally attendees illustrates the disconnect. When faced with visual proof that Trump's Attorney General William Barr as well as the former president's own daughter said claims of election fraud were "bullshit," one MAGA devotee alleged that the deposition video had been deceptively "edited" while another suggested the person under oath who very much resembled Ivanka Trump "might be a clone."

That's doublethink for you. But are the rest of us any better? According to a New York Times/Siena College survey, 71% of voters think democracy was at risk. However, "just 7% identified that as the most important problem facing the country." Seems a bit little like obsessing over your next chess move knowing full well your opponent intends to flip over the board. Without aspiring to even act like a voting republic, how can we ever hope to address all our other pressing issues?

Lest we imagine the dangers of doublethink are literary or hypothetical, or akin to a sports fanatic who genuinely believes their hometown team never commits a foul, the consequences of the MAGA reality distortion field are deadly serious. Before early voting began this month, the Texas Tribune ran a lengthy investigation detailing unprecedented harassment and threats of violence targeting poll workers.

Another question pops up whenever pundits on both the right and left dismissively refer to Jan. 6 as "a three-hour riot." What if Vice President Mike Pence had been lynched? Would that change how we now think and talk about the abortive putsch?

As the hearings revealed, at one point those shouting "Hang Mike Pence" were a mere 20 feet from the target of their scorn. Recordings document that members of the Secret Service detail sworn to protect Pence called their loved ones to say goodbye.

A former spokesperson for the Oath Keepers militia didn't mince words before the committee.

"What Jan. 6 was going to be was an armed revolution," Jason Van Tatenhove testified. "People died that day. Law enforcement officers died. There was a gallows set up in front of the Capitol. This could have been the spark that started a new civil war."

One of the defining characteristics of historical fascism was the stoking — and, ultimately, deputizing — of paramilitary vigilantes who could operate with impunity, plausible deniability and sadistic cruelty. The same holds true for neofascism today.

What most readers vividly remember about Nineteen Eighty-Four is the scary part involving the main character Winston's fear of rats. A common misconception about Winston's torturer, O'Brien, was that he mouthed the words of Party ideology as an excuse to conduct his sadistic work. The truth is the opposite.

"The exaltation, the lunatic enthusiasm was still in O'Brien's face," Orwell wrote. "He is not pretending, thought Winston, he is not a hypocrite, he believes every word he says."

O'Brien was himself a victim of Big Brother, a true believer. That's how he could rationalize his manipulation and abuse.

The most salient fact of political life in the U.S. is one party concedes when they lose while a critical mass of the other party would rather go out in an enthusiastic blaze of suicidal glory. Impenetrable conspiracism and the precipice of authoritarianism follow naturally from there.

But anyone who would cast a ballot for leaders so craven as to refuse to condemn the willful subversion of our elections, and yet still recites the Pledge or sympathetically references the work of George Orwell, is deeply ensnared in doublethink.

And is there any better example of Orwellian newspeak than our calling such people "republicans"?