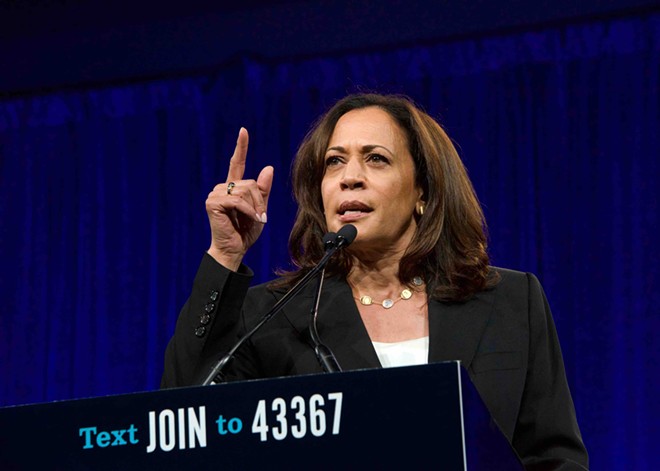 Shutterstock
The anti-woke GOP's much-ado-about inclusion response eerily echoes opponents of the original ADA and their learned resistance to accommodating the perspectives of others.

Late last month a scandal like no other rocked the White House. On the 32nd anniversary of the Americans with Disabilities Act (ADA), Vice President Kamala Harris sat down with disability advocates, some of whom are blind, and introduced herself by saying, "I am a woman sitting at the table wearing a blue suit."

Though most of us enjoy the privilege of not needing visual descriptions, the formality Harris adopted has become a common courtesy in professional settings when addressing those with visual impairments.

But that didn't stop right-wing social media from shitting a collective brick. Texas' ever-likable U.S. Sen. Ted Cruz tweeted his mockery, as did the ever-erudite Colorado U.S. Rep. Lauren Boebert, and one Republican congressional candidate for Texas' 3rd district lashed out indignantly, "We can fucking tell you're a woman by looking at you! ... Is this a new 'woke' thing or what?"

Admirably salvaging a teachable moment, the American Association of People with Disabilities expressed its "hope to see more government leaders give visual self-descriptions in the future!"

The anti-woke GOP's much-ado-about inclusion response eerily echoes opponents of the original ADA and their learned resistance to accommodating the perspectives of others.

"I represent a large group of citizens who object loudly and vigorously against the assault on our national purse by the handicapped," a C-SPAN caller opined in 1989, for example. "For 6% of the population to enact an enormous tax, stripping away our hard-earned assets, on the basis that there's been some horrible deprivation of their rights is just a fraud on the national taxpayer. The fact is that to be handicapped is an unfortunate situation all of us dread, but to then say that we're going to take a handicapped person who is out of step with the basic pace of life and make him or her equal to their brethren is simply a costly effort of social engineering."

The great Justin Dart, considered the "Godfather of the ADA," cleverly replied in kind: "With all due respect to the caller, you just heard a very good reason why we need this law."

By current count, some 61 million Americans, around 25% of us, have some type of disability. No doubt accessibility ramps and special bathroom stalls would have been rebuked as "woke" in their day.

The following year, on the floor of the U.S. House, Rep. William Dannemeyer of California took special exception to the ADA protections for those with communicable diseases.

"With this bill, every HIV-carrier in the country immediately comes within the definition of a disabled person," the Republican explained, "because they are a carrier of a fatal virus that causes death. Is that sound public policy? And since 70% of those people are male homosexuals, we are going to witness an attempt on the part of the homosexual community to identify this as their Bill of Rights. For instance, if a school district turns down an applicant because he's a homosexual, that HIV-carrier is going to take that school to court and say, 'You cannot discriminate against me because Congress says I'm a disabled person.' Similarly, if a person applies to be a supervisor in a youth group..."

You get the idea.

Identical homophobic bluster wafted through the higher chamber as well, instigated by infamous U.S. Sen. Jesse Helms, a Republican who represented North Carolina for 30 years, though he added fears that the ADA would apply to "pedophiles," "kleptomaniacs," those with low IQ scores and "transvestites."

When the subject turned to the freedom of people with disabilities to adopt children, a flummoxed Sen. Tom Harkin asked Helms, "What is the relevancy to an adoption agency whether a person is tested HIV-positive to whether or not they can be good parents?"

"Surely, you're not serious? I think it's absolutely relevant!" exclaimed an apparently dumbstruck Helms. "Bear in mind, it's about 85% of HIV-positives are drug users and/or homosexuals."

Turns out that moral panics of yesteryear return with new right-wing laminations. The terminology may have shifted from "transvestites" and "AIDS" and "homosexuals" to "groomers" and "fentanyl" and "drag queen story hours." But the tried-and-tested conservative strategy remains the same: to concoct insipid controversies that deflect from genuine challenges and thereby spare the rich and comfortable from ponying up the funds necessary to maintain something resembling a decent society.

Texas Gov. Greg Abbott, who was compassionately awarded a $5 million settlement for his tragic spinal cord injury, supported capping jury-awarded "noneconomic damages" at $250,000 with no adjustment for inflation in a bid to thwart "frivolous lawsuits." Yet Abbott will get $15,000 a month, with cost-of-living increases factored in, for the rest of his natural life.

Meanwhile, as the Houston Chronicle recently reported, "nearly 170,000" disabled Texans languish on Medicaid waitlists for the care they need. Some wait "nearly 20 years to receive help."

Lost in the latest episode of reckless disregard for SARS-CoV-2 are the millions of immunocompromised Americans for whom the pandemic is far from over, with more COVID long-haulers recruited by the subvariant. And with Roe v. Wade thrown to the pavement by Donald Trump's remade Supreme Court, the disabled are legitimately terrified about their access to potentially life-saving abortion procedures.

As Vice President Harris reminded the nation during that July 26 meeting, “People with disabilities have higher rates of pregnancy complications and are, in fact, 11 times more likely to die before, during and after childbirth.”

Describing what's intolerable offers no excuse for apathy, however. Electoral democracy, for all its faults, affords plenty of second chances, and for starters, we can remind our fellow Texans that Abbott's job is on the ballot this November. (It's a good time to check your voter registration too.)

And after more exasperating GOP chicanery, last Tuesday the U.S. Senate finally approved legislation to provide veterans disabled from inhaling burn pit smoke in Iraq and Afghanistan — not to mention the military's use of chemical weapons like Agent Orange — the healthcare they desperately deserve.

As with the passage of the ADA three decades ago, we have unremitting activist pressure to thank. Better late than never.