Bad Takes: Gov. Greg Abbott's focus on fentanyl comes as he looks to deflect from his failures

The governor is showing concern about overdose deaths as he faces scrutiny for mishandling gun violence, COVID-19 and the electrical grid. 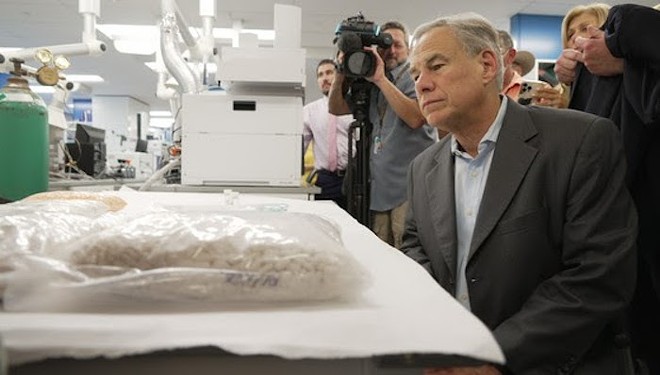 Not the merciless heatwave that has our mismanaged electric grid teetering on the brink.

Not surging COVID-19 — for which the Centers for Disease Control has again advised those of us living in Bexar County to mask up indoors.

Not even the epidemic of gun violence, which has only been highlighted by the infuriatingly slow police response to the Uvalde school massacre.

All but mum on these emergencies, Abbott instead alerted us to the deadliness of fentanyl, a synthetic opioid many times more potent than morphine. "Almost 1,700" Texans died from fentanyl overdoses last year, according to Abbott. Of course, well over 3,500 Texans die every year from guns and 6,195 San Antonians have died from COVID-19 — and counting. And who knows how many of us would keel over tomorrow if our air conditioners were to cut out?

Let's not, however, commit the fallacy of appealing to worse problems. Fentanyl is a big challenge and Abbott claims he's taking it seriously. "I'm urging parents across the state right now to know that your kids are going to parties and at those parties pills are being traded and used," Abbott said last week. "And what you don't know, and what your child does not know, is whether or not a pill that they were given at that party, is laced with deadly fentanyl. It's so important that as parents you play a role in making sure that you educate your children about the way that it can be laced on a drug in ways in which they have no possibility of discerning whether fentanyl is on that drug."

That's technically not true. You can easily tell whether a drug has been laced with fentanyl by simply testing it. But under the Texas Controlled Substances Act, such testing equipment is classified as "paraphernalia." That means fentanyl testing strips, which are inexpensive and exceptionally accurate, are currently illegal in Texas.

State Rep. Jasmine Crockett, D-Dallas, introduced a bill in January 2021 to decriminalize fentanyl testing strips. The GOP-dominated Texas House quashed it. As a result what we actually have "no possibility of discerning," to quote the governor, is just how many of those 1,700 dead Texans would not have unintentionally overdosed had he and his party backed Crockett's legislation more than a year and a half ago.

For those struggling with addiction, Texas also "hasn’t expanded eligibility for Medicaid, so Texans with low incomes have limited access to recovery programs", as the Texas Tribune reported last month.

One almost suspects Abbott's focus on fentanyl is a diversionary tactic having little to do with harm reduction and much to do with beating a cheap drum over President Joe Biden's alleged "open border" policies. Historically, illicit drugs serve as dog whistles so that, without saying anything too explicitly racist, politicians can scare well-to-do white Christian voters with nightmarish images of crazed criminal minorities: the Irish and alcohol, Mexicans and marijuana, Blacks and crack cocaine, methamphetamine and poor rural whites.

While the Grand Old Party of unregulated capitalism have been somewhat reluctant to cast aspersions on the Big Pharma executives responsible for the opioid crisis, the party's had no trouble exploiting the rhetorical power of the War on Drugs to paint asylum-seekers and undocumented migrants as drug smugglers hellbent on poisoning the nation's children.

For libertarians and leftists alike, that's a stretch. What remains to be decided is whether we'll turn out in sufficient numbers for Abbott's November rival, Beto O'Rourke — who not only proposes to legalize cannabis but jams regularly with Willie Nelson.

Poor Abbott. If 90,000 Texans had died from COVID on your watch while you blocked mayors from issuing mask and vaccine ordinances, and hundreds of Texans froze to death due to a power grid you refuse to hook up with neighboring states, and if gun homicide rates rose 66% and three of the deadliest mass shootings in U.S. history occurred while you were governor, wouldn't you be trying to change the subject too?