It's not those fleeing violence or looking for work who are holding you back, it's the richest 1% stoking division and lining their pockets. 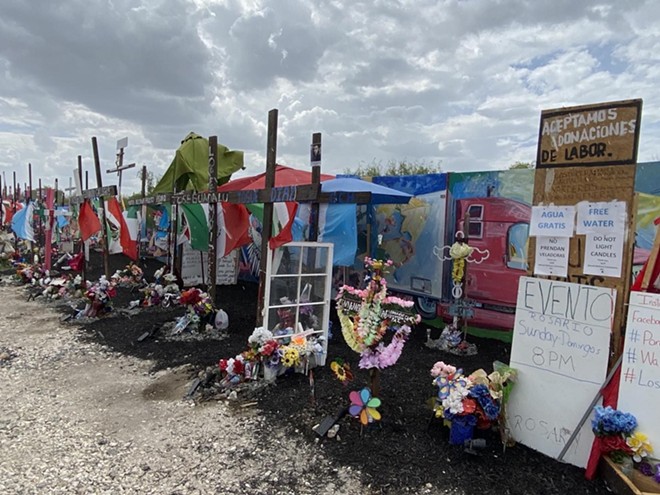 Sanford Nowlin
A makeshift memorial has grown up around the site where more than 50 migrants died in the back of a tractor-trailer abandoned in San Antonio.

So, I suggest that we look to the stream of poison that is being injected into our national life through that lower type of foreigners. I would build a wall of steel, a wall as high as Heaven, against admission of a single one." — Gov. Clifford Walker of Georgia at the Second Imperial Convocation of the Knights of the Ku Klux Klan, 1924

Another nine dead bodies were fished out of the Rio Grande earlier this month. According to the United Nations, more than 4,000 migrants have died at the U.S.-Mexico border since 2014 — most from drowning or dehydration. And that's not counting the 53 migrants trapped to death in the back of a boiling tractor-trailer in San Antonio this June.

To listen to Texas Gov. Greg Abbott, the explanation for the carnage is obvious: President Joe Biden's "open border" policies. But when you block those seeking asylum from so much as approaching designated ports of entry, where are they supposed to turn?

"Venezuelans were by far the most common nationality encountered by Border Patrol agents in the Del Rio sector in July, followed by Cubans," the Associated Press reported. Republicans talk an awfully good game about opposing socialism, but when the opportunity to accept refugees from autocratic states including Venezuela and Cuba arises, Abbott's more than happy to send them right back to the repressive regimes from which they've escaped.

And the hypocrisy doesn't end there. Abbott continues to defend keeping Title 42 in place, a Trump-era emergency measure authorizing rapid deportations to prevent the spread of coronavirus. Yet he's also acted as if the pandemic was all but over, precipitously lifting public health ordinances in the summer of 2020.

With 90,000 Texans now dead from COVID, Abbott has failed miserably at protecting us from the disease. Instead, he appears to believe the migrants themselves are the plague.

"We're being overrun," Abbott exclaimed to the Conservative Political Action Conference back in August — a line he's tweeted incessantly and parroted on every right-wing media outlet he frequents. Unscrupulous invasion rhetoric aside, the continental United States comprises more than 3 million square miles, and according to LendingTree, there are more than 11 million vacant homes in America. We have plenty of room.

What we don't have is labor. Before the pandemic, half of agricultural workers and a quarter of construction workers were undocumented immigrants, according to some estimates. One big culprit in rising price inflation is the fact that — thanks to former President Trump's zero-tolerance policies such as teargassing migrant children and separating them from their parents — we're down nearly 2 million foreign-born workers from where we would have been if post-2010 trends had persisted.

"Lack of progress in expanding legal channels has pushed yet more migrants to view unchecked border crossings and asylum claims as their best route into America," The Economist explained this year.

The GOP's shameless demagoguery and willful obstruction of comprehensive immigration reform, not "open borders," are why migrants are dying in droves — and why we as a country have fallen abysmally short of the values we claim to hold dear.

"As any chef will tell you, our entire service economy — the restaurant business as we know it — in most American cities, would collapse overnight without Mexican workers," the chef and author wrote. "Some, of course, like to claim that Mexicans are 'stealing American jobs.' But in two decades as a chef and employer, I never had ONE American kid walk in my door and apply for a dishwashing job, a porter's position — or even a job as prep cook. Mexicans do much of the work in this country that Americans, provably, simply won't do."

Immigrants bus your tables, harvest your crops, mow your lawns, deliver your pizzas and babysit your kids. They are not mostly "rapists" or "bringing drugs," contrary to what certain fascist blowhards would have you believe.

Yet half of white Republicans admit to feeling triggered when they hear a foreign language spoken in public, according to a 2019 Pew Research Center survey. Last month, the Express-News reported that San Antonio's Migrant Resource Center, opened to help asylum seekers with service referrals and transportation connections, has drawn unfounded "fear and suspicion."

With such a reliable wellspring of anti-immigrant anxiety and animosity, we can't be surprised when Republicans perennially reach for the nativism card to win close elections.

But even if you don't give a flying Ted Cruz about basic human decency, there's more to consider.

"Contrary to our most fearful and xenophobic instincts, undocumented workers from countries like Mexico on balance are a net gain for Social Security, creating an estimated $7 billion net surplus per year to the system," business columnist Michael Taylor wrote in the Express-News earlier this month. "What has made America great is ambitious, hardworking people going to extraordinary lengths to get here then contributing disproportionately to the nation's economic might."

At the very least, granting citizenship to those brought to this country as kids would allow them to grow up to be engineers and doctors and make us all proud. Defying the odds, many have already done just that.

It's not those fleeing violence or looking for work who are holding you back, it's the richest 1% stoking division and lining their pockets with wealth that should go to working people's wages — native-born and foreign-born alike.