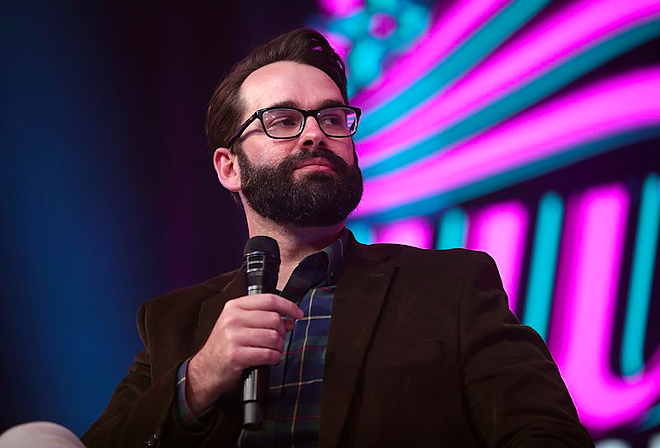 A woman, typically defined, is an adult female member of the human species, and being a woman is a gender that traditionally contrasts with being a man. Despite the barrage of right-wing alarmism, there is fuck-all evidence that trans student athletes are pretending to be something they aren't in an attempt to steal all the trophies and destroy girls’ sports.

And, over the past five years, according to a Reuters investigation, there were all of “4,780 adolescents who started on puberty blockers” due to “a prior gender dysphoria diagnosis.” That's out of 25 million kids in the country between the ages of 12 and 17.

So, the hyperbolic and hysterical conservative overreaction to recent milestones in transgender acceptance meets the classic definition of a moral panic, and it's a vulnerable minority of young people who pay the cruelest price for normalizing such antiquated prejudice.

Matt Walsh would troll to differ with all of what I’ve just written. The Daily Wire commentator is the star of an online documentary that your Trump-fellating uncle may have already recommended to you called What Is a Woman? He sat down with Texas’ adopted village idiot, Joe Rogan, earlier this month on the most popular podcast in America — an interview fittingly presaging Transgender Awareness Week, which culminated in a day of remembrance on Nov. 20 to memorialize the victims of transphobic violence.

First things first, Walsh would eliminate the word “typically” from the initial definition I gave for womanhood, then scrap the notion of gender altogether. In a former era, he might have made a name for himself by fearmongering over the Satanic surge in those identifying as left-handed, and pilloried the lefties who were cheating right-handed pitchers in baseball out of scholarships and accolades. But these days, “our culture is telling us that differences between boys and girls don’t matter,” so he stated at the start of his insufferable film.

Whether it’s accurate to say “our culture” speaks with a single voice, isn’t the trans community telling us the exact opposite — that the differences between girls and boys do matter? After all, if they were irrelevant, why would a kid assigned female at birth bother identifying as a boy to begin with or vis versa?

My first earful of Walsh was his scruplesless downplaying of a pandemic that by now may have killed as many as 20 million people around the globe. In April 2020, Walsh compared the public health measures that kept our hospitals functioning to “gestapo”-esque oppression. Last month, he demanded that cops “break down the doors” of drag shows and “charge them all as pedophiles.”

Walsh, it would seem, is a-OK with a “police state,” provided it targets manufactured crises instead of genuine emergencies.

Although he homeschools his own children, Walsh has to be dragged from the fluorescent light of school board meetings with his teethmarks still on it. At one such public commentary, he maintained that “flu is more dangerous to kids than COVID.” That’s ludicrous and false. Seasonal influenza has never in recent memory killed 100 children in a month, yet COVID has done so multiple times over the past three years. All told, there are around 150 pediatric flu deaths annually, whereas pediatric COVID deaths already number over 1,500.

We’re also learning more about the effects of Long COVID by the day — for instance, that even mild bouts can lower white blood cell counts and cause immune dysregulation and exhaustion, thereby making us more susceptible to severe cases of other infections. That would include the Flu and Respiratory Syncytial Virus, both of which are currently swamping children’s wards.

We ought to dispense, therefore, with any illusion that Walsh acts out of some heartfelt concern for the wellbeing of the nation’s youth. And on The Joe Rogan Experience, he further showcased his statistical acumen when the host asked him how many minors are taking hormone-suppressing medications.

“If we’re talking about the drugs, millions,” Walsh replied.

“Millions of kids have been on hormone blockers? Really?” Rogan thrice-repeated the question.

“I’m sure someone’s going to fact check me on this,” Walsh hedged, “but my guess is that we’re into the millions now by this point.”

His guess turned out to be millions off. Again, since 2016, fewer than 1,000 kids a year have been prescribed these drugs — and only with parental consent and upon doctor diagnosis and recommendation.

Rogan laughed off the blatant misinformation he had just broadcast after his assistant interrupted with a reality-check in real time.

If you’re gullible enough to accept Walsh as a credible source, perhaps you wouldn't find preposterous his further claim that “child endocrinology clinics barely exist anymore because they’ve all become transgender — this is what they do now.”

Does Walsh truly believe dozens of pediatric endocrinology clinics across the nation have stopped treating the hundreds of thousands of children with diabetes and thyroid disorders in order to focus exclusively on prescribing hormones to less than a thousand trans kids a year? Gimme a break.

Rogan allowed Walsh’s bigoted denial of the very existence of transgender individuals to pass relatively unimpeded, only occasionally interjecting that consenting adults should be able to do as they please. After the mutual trans-bashing session, which went on for more than an hour, Rogan and Walsh then debated gay marriage, I shit you not. In the Year of our Lord 2022.

Attentive listeners would discover that Walsh’s chief objection to a nationwide ban on all premarital sex is logistical. “No, I would not support a law that bans sex outside of marriage”, he explained. “For one thing it’d be impossible to enforce. If I was, like, dictator of the universe and I could control everything, we could talk about it.”

Yikes. Just this week, Walsh also said he would bar soccer players on the U.S. Men’s National Team from re-entering the country after their decision to wear LGBT Pride flags at the World Cup in Qatar that starts soon.

In his Twitter bio, Walsh labels himself a “theocratic fascist.” Though probably intended tongue-in-cheek, we should do him the honor of taking him at his word.

Thankfully, although he prides himself on knowing what a woman is, he doesn't have much of a clue what’s important to women. They “don’t care that much about abortion,” he mainsplained the day before the midterm elections.

“The assumption was if Roe v Wade is overturned, it’s going to mobilize voters to come out for Democrats, and it just hasn’t, because most people see that and just kinda shrug their shoulders,” he further claimed.

On this, as many other counts, Walsh couldn't have been more wrong. Millions of women passionately asserted their reproductive rights during the election, parting the forecasted Red wave and halting a complete Republican takeover of Congress.

Like a Sith, Walsh deals in absolutes. As a merchant of religiously motivated panic, his technique is to kick up enough dust for the general public to believe there’s a legit debate over what’s now a settled consensus. But there isn’t a controversy anymore: trans kids deserve our acknowledgment, love, and gender-affirming care.


Surprisingly, the lowest lowlight of Walsh's appearance on The Experience didn't come from the guest but Rogan himself.

Rogan called the assault on Nancy Pelosi’s husband “the chickens come home to roost,” suggesting that the current House Speaker’s policy ideas regarding homelessness were somehow responsible for the near-fatal attack. Rogan also noted the “Black Lives Matter flags and Pride flags” in the attacker’s home.

This is victim blaming, full stop. Yet we are so inured to the crassest, vilest takes routinely airing on Rogan's program that not a single media outlet bothered to report what he said.

In 1963, when Black nationalist Malcolm X referred to the assassination of John F Kennedy as “the chickens coming home to roost”, Americans were outraged, and the Nation of Islam suspended him from preaching. Evidently, almost six decades later, Spotify has lower standards.