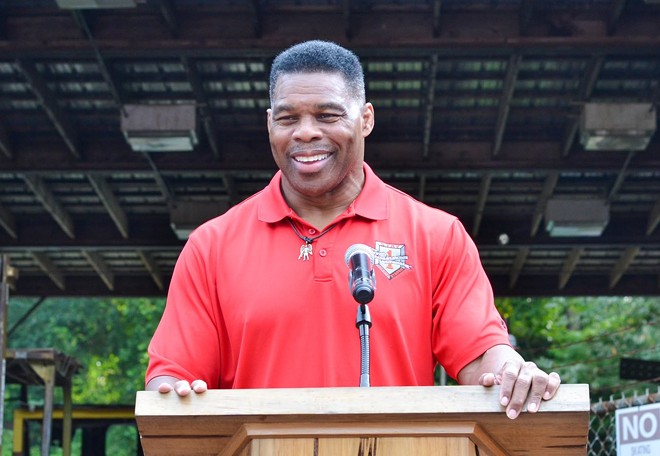 If you've ever trolled the backwaters of right-wing talk radio, you may have happened across the voice of Jack Riccardi, a host on San Antonio's 550 KTSA for 20-plus years.

His right-wing shtick features toadying up to the likes of the My Pillow Guy and Lyin' Ted Cruz as well as such genius-level gems as the claim that "Gregg Popovich hates Texas."

Far be it for someone who writes a column called Bad Takes to deride the hustle of a fellow controversy entrepreneur. But Riccardi's sage wisdoms on recent revelations surrounding U.S. Senate candidate for Georgia Herschel Walker truly take the cake.

To recap the scandal of the hour, as documented in The Daily Beast, Walker — a football star-turned-politician and self-avowed "proud pro-life Christian" — allegedly paid for his then-girlfriend's abortion in 2009. In addition, Walker "urged her to terminate a second pregnancy two years later," according to a subsequent New York Times report, which noted that she "ended their relationship after she refused." Again, allegedly.

On Oct. 4, the day after the dirty laundry aired, KTSA's The Jack Riccardi Show ran damage control as best its host could.

"Let's say the abortion story is true," Riccardi said during his broadcast. "So, Walker had a girlfriend 13 years ago, and he paid for her to have an abortion. Who exactly does he lose in terms of supporters? Does he lose his supporters? Do people that liked him and put his sticker on their car go out and scrape it off? ... Because, clearly, if he gets into the Senate, he's a pro-life vote. If it's about a Supreme Court nominee, he's in favor of the pro-life nominee. So, I don't know what the left thinks they're doing with this story."

Walker has claimed that abortion is akin to murder. So, imagine he had murdered someone in cold blood 13 years ago. Would Republicans also overlook that peccadillo in their desperation to flip the Senate? Would even reporting such a story violate Riccardi's highly refined journalistic scruples?

The AM radio jock continued his line of thought.

"Does Walker lose the possibility of [appealing to incumbent Sen.] Raphael Warnock's voters or Democrats? Why? That's the party that says you should be able to get an abortion any time right up to the moment of delivery. I don't understand how they are calling him out on this. I know the Democrats think they have him in a 'gotcha moment,' but what does that say about their position on abortion if they are castigating him for paying for one?"

I know of no Democrat who said Walker should have estranged another kid. Supporters of reproductive choice aren't castigating him for paying for an abortion, they're castigating him for trying to deny a freedom to everyone else that he unashamedly enjoyed.

And, for the record, the U.S. Supreme Court's 1973 decision in Roe v Wade didn't mandate the right to an abortion for any reason "right up to the moment of delivery." That's a lie. Roe established that, after 28 weeks of pregnancy, states can ban abortions outright, except to protect a patient's life.

I agree. Just as you can be an environmentalist who flies to climate protests by private jet. Hyper-focus on personal ethical failings often distracts us from the public policies we must implement together.

But if right-wing talk-radio hosts now plan to refrain from mocking those who share anti-capitalist memes via an iPhone or leftists who write bestselling books yet don't immediately give all the proceeds away to charity, we should anticipate lots of dead air.

"Do Democrats think that we think our pro-life position is held only by lily-white saints — pardon the pun, I know Walker's not white — but you know what I'm saying, right?" Riccardi went on with his spiel. "Like, I think maybe they perceive conservatives as people who have this sort of unrealistic idea that we live perfect lives. Is that a newsflash to the Democrats?"

Though he can leave one with the impression that he's using the English language, closer inspection reduces many of Riccardi's partisan rants to a series of disingenuous fart noises in sentential form. What's at issue in the Walker allegations isn't holding individuals to impossible standards but exposing self-serving applications of their own professed norms.

To cynically lament that "both sides are liars" or to humbly suggest that "we've all fallen short of the glory" are valid and earnest reactions to the messiness of modern life and politics. But to deploy cynicism and humility only when it suits you is invariably rotten.

At the first whispers that Beto O'Rourke might run for governor in May of last year, for example, Riccardi openly called out the former El Paso congressman's "life of privilege," dismissing him as "another guy who wants to make the rules for everyone without ever having to live under them."

But isn't that exactly what Walker's done by backing a nationwide ban on abortion? After all, it's a rule he chose not to live under when it affected him. Walker has also consistently chastised fatherless households while apparently creating more than one of them.

"The perfect Democratic voter is the person who believes they can't do anything, and the government has to do it for them," Riccardi said in July 2019 after that election cycle's first Democratic presidential debate. "That's what the Democratic Party today stands for."

Yet, with early voting beginning this month, it's the Democrats, however hapless, who are all that stand in the way of a complete federal takeover of reproductive healthcare — plausibly including access to contraception as well — while today's GOP believes the government must make our family planning decisions for us.