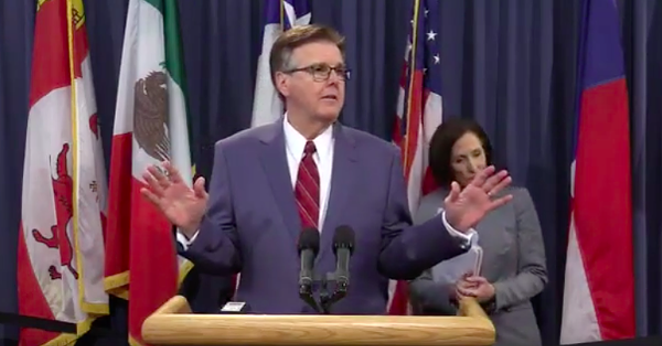 Texas Tribune livestream, Facebook.com
Lt. Gov. Dan Patrick thinks Texas should redesign 8,000 campuses so they have fewer entrances and exits.
In addition to the "thoughts and prayers" pro-gun politicians dependably trot out after a mass shooting, there's usually a wealth of ass-backward logic to explain why guns shouldn't receive any blame for the bloodshed.

In the wake of this morning's Santa Fe High School shooting, Texas Lt. Gov. Dan Patrick wasted no time with the contortions.

Within hours, the Republican was at a press conference ruminating on how to stop future school shootings. Apparently, limiting access to guns isn't one of the options on the table, but redesigning thousands of Texas schools sure as hell is.

“We may have to look at the design of our schools moving forward, and retrofitting schools that are already built, and what I mean by that is there are too many entrances and too many exits to our over 8,000 campuses in Texas," he said.

"We’re going to have to be creative," he added.

If nothing else, it sounds like a pretty creative way to avoid the issue.

Need to hear it for yourself? CNN had their cameras rolling.


“We may have to look at the design of our schools moving forward, and retrofitting schools that are already built. … We’re going to have to be creative,” Lt. Governor Patrick says about ways to prevent future school shootings https://t.co/jmIjiQWgEE pic.twitter.com/S1vScN9TSe