The Democratic challenger ended the latest fundraising period, July 1 through Sept. 29, with slightly more cash on hand than the governor. 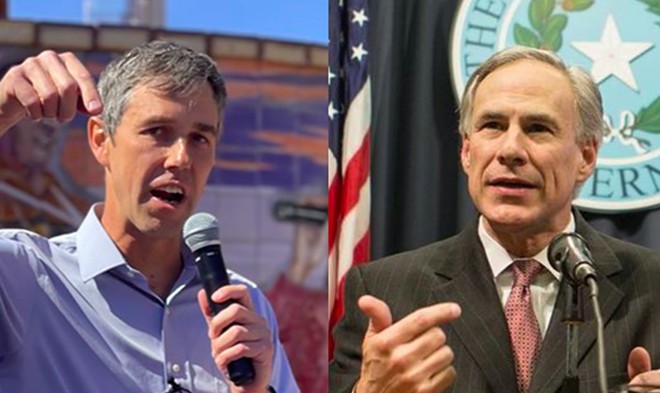 Abbott spent far more than O’Rourke during the period — $53 million to $32 million — and the governor’s campaign said his expenses included $30 million in pre-purchased advertising time through Election Day.

Still, the development shows how O’Rourke is by far the biggest financial threat Abbott has ever faced. O’Rourke outraised Abbott by a decisive margin during the prior reporting period and narrowly outraised him again during the latest period.

The newest filings with the Texas Ethics Commission came as polls continue to give Abbott a lead in the mid-single digits. Abbott himself suggested Wednesday he saw a stable race unfolding, telling reporters in Dallas that the polls “have been flatlined … for months now.”

A Marist poll released Wednesday gave Abbott a 4-percentage-point lead, though that was among registered voters. Likely voters are more commonly surveyed in the final weeks of an election. The Marist poll did survey voters who said they will “definitely” vote, and Abbott led among them by 8 points.

But the fundraising reports show O’Rourke cannot be counted out yet. He had over five times more contributions than Abbott had over the summer period, roughly 472,000 to 86,000. The ratio was similar in the previous period.

Abbott’s top donors — at $1 million each — were California real-estate developer Ed Roski Jr. and Miriam Adelson, the wife of the late casino mogul and GOP megadonor Sheldon Adelson. O’Rourke’s No. 1 donor was cryptocurrency billionaire Sam Bankman-Fried, who gave $1 million. O’Rourke also got $500,000 more from George Soros, the New York-based Democratic megadonor who cut a $1 million check to O’Rourke during the previous period.

Among other notable donors, O’Rourke received $100,000 from Illinois Gov. J.B. Pritzker, whose state Abbott has been busing migrants to. And Abbott got $250,000 more from Dallas pipeline mogul Kelcy Warren, who is suing O’Rourke for defamation over claims he has made about Warren’s alleged influence over Abbott after the 2021 power grid collapse.

O’Rourke continued to get more money from outside Texas. On the latest report, 41% of the money he raised was from out of state, as was 51.8% of the number of contributions. Those numbers were 19% and 50.7% for Abbott, respectively.

The price tag on the governor’s race has already topped $200 million, and Abbott is well on his way to spending the $100 million that his campaign has forecast. The reports also show how much the contest is overshadowing fundraising in other statewide elections — the closest haul to Abbott or O’Rourke’s was $2.3 million by Lt. Gov. Dan Patrick.

That is despite the fact that some polls have suggested the narrowest statewide race may be the one for attorney general, not governor. The latest filings showed that Republican incumbent Ken Paxton raised more than his Democratic challenger, Rochelle Garza, $2.1 million to $1.6 million, and held a 3-to-1 cash-on-hand advantage.

In the cases of Kleberg and Warford, they also ended the period with more cash on hand.