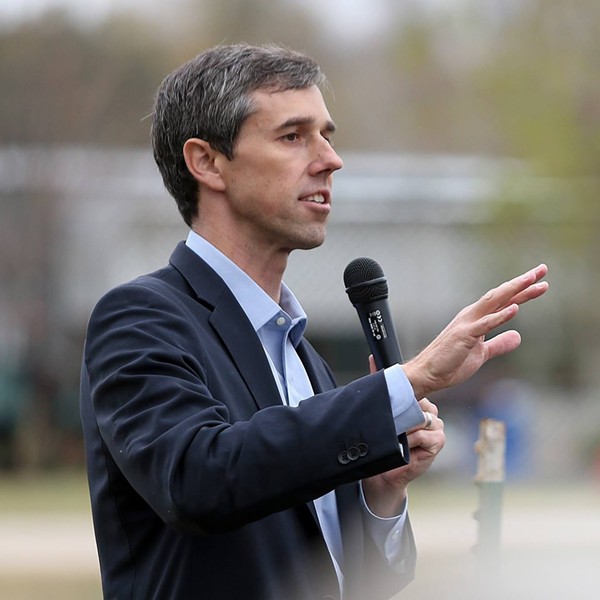 Facebook / Beto O'Rourke
This story was originally published in The Texas Tribune.

"Let me tell you what the president and our junior senator are doing right now," he said at an event hosted by The Texas Tribune. O'Rourke was being interviewed by the Tribune's CEO, Evan Smith. "They want you to be afraid of Mexicans. When they call them rapists and criminals, and say only a wall will keep them out."

O'Rourke is challenging Cruz in the November election. During the interview, he often referred to Cruz as "our junior senator," rather than by name. And he criticized Cruz and Trump on their positions regarding LGBT people.

Cruz responded on Twitter later Tuesday: "Liberal Dems — like Hillary and @BetoORourke — say anyone who wants to secure the border and end sanctuary cities must be a bigot and 'hate Mexicans.' That’s a nasty insult directed at millions of Texans who welcome legal immigrants (like my Dad), but also respect rule of law."

The remarks come the same day O'Rourke's campaign said it raised $6.7 million in the first quarter of 2018. He said 70 percent of that money was raised within the state. Cruz has yet to release his fundraising haul for the same time period.

At the same time, O'Rourke addressed criticism that he failed to consolidate Democratic support on the March 6 primary, when he lost more than a handful of counties to underfunded challengers.

"We finished 38 points ahead of the closest finisher," he said. "Many in Texas, perhaps most, still did not at that point — maybe still do not today — know who I am, and that's on me to do."

He then stressed that he spent a great deal of time away from the state's Democratic strongholds, courting votes in conservative and rural bastions.

On the issue of guns, O'Rourke said he does not own firearms, but does not "want to take anyone's guns" or repeal the Second Amendment.

"In the five-and-a-half years I've been in Congress, we've had precisely zero debates on gun safety as tens of thousands of our fellow Americans are killed every year in gun violence," he said.

"We still don't have universal background checks, so millions of gun sales are going through without any background check whatsoever right now — even though we know that, in those states that have adopted them, we see a 50 percent reduction in gun violence against an intimate partner."

As for the tax rate, O'Rourke said that the country is in need of infrastructure investments, particularly in broadband internet to rural regions, and that tax hikes might be needed.

"I think for some, the very wealthiest among us, for corporations, taxes are too low," he said. "I don't think they need to be raised back to where they were necessarily."