The Democratic candidate will hold the virtual zoom meetings on Monday evening to launch a pair of new organizer coalitions. 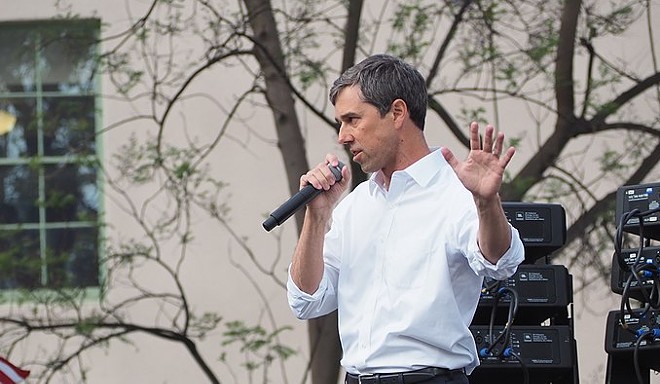 Luke Harold / Wikimedia Commons
Beto O'Rourke speaks during a campaign appearance.
Texas gubernatorial candidate Beto O'Rourke, still recovering from a bacterial infection, will hold a pair of Zoom meetings Monday with campaign organizers and supporters, according to a press statement.

The virtual events are the first public appearances by the Democrat since he cancelled his in-person stop Friday in San Antonio and checked into a hospital here to  receive care. The former congressman also scrapped five other South Texas appearances so he could return to his home base of El Paso to recover.

O'Rourke is scheduled to hold a 5:30 p.m. meeting for the launch of the Latinos Con Beto Coalition, which features legendary activist Dolores Huerta as well as Hollywood actor Eva Longoria.  A 7 p.m. meeting will kick off the Black Texans for Beto Coalition.

At each virtual event, O’Rourke will meet virtually with teams of organizers to address what issues are most important to them and to assure his dedication to “making Texas a state where everyone can thrive," according to an announcement from the campaign.

According to O'Rourke's campaign site, he's still set to appear in Falfurrias on Wednesday, Aug. 31.