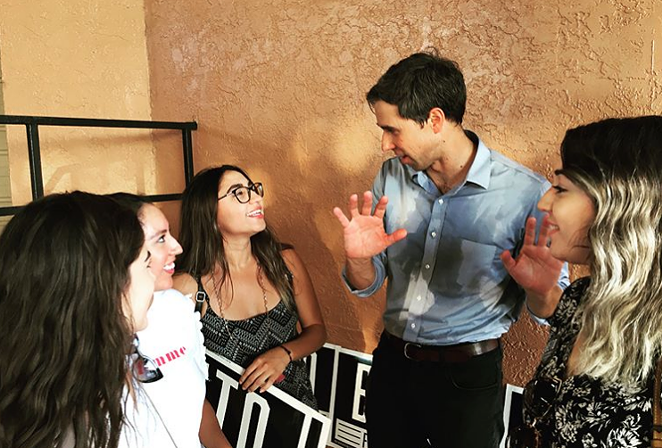 Instagram / betoorourke
On Saturday, U.S Representative (D-El Paso) Beto O’Rourke unveiled his San Antonio field office for his 2018 Senate campaign. Aside from the opening, O'Rourke was busy canvassing and sweating across town at an LGBTQIA town hall meeting at Casa de Azul de Andrea, a World Cup watch party on the West Side, and at Las Nieves, where he sampled a half sandia, half mango and lucas raspa with District Representative Diego Bernal.

The dash around San Antonio occurred on the coattails of the announcement that Beto's funding, free from the influence of corporations or PACs, has doubled that of incumbent Ted Cruz. In a Wednesday announcement, O'Rourke's camp said around 70 percent of his donations are coming from Texas, with an average commitment of $33 dollars and that the total number of donations is in the neighborhood of 10.4 million dollars in the past three months.

At the opening, O'Rourke emphasized his vision for the future of Texas and the crucial role San Antonio has in making that happen, stating the city is a demographic example of what the state will become.

Evergreen and Main in San Antonio.

"I want to make sure that this state leads the way for the country treating everyone with respect, with dignity, with justice and equality starting right here in San Antonio," said O'Rourke in a Facebook broadcast of the event.

Some of O'Rourke's other platforms include universal healthcare, rewriting immigration laws, protecting dreamers, dismantling the school to prison pipeline and providing mental health resources and support for veterans.

His new office located on 430 Austin Street, will be a center for calls, canvassing, and organizing for volunteers.