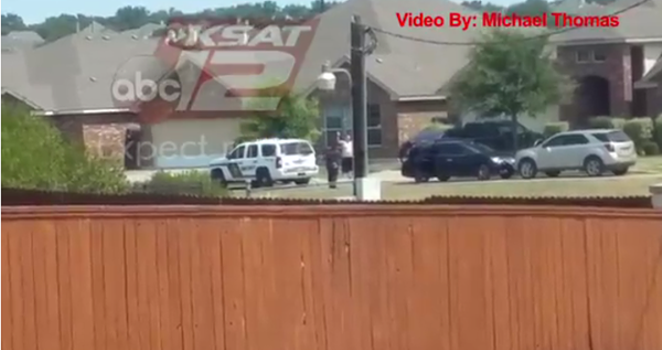 Juan Contreras, president of the Deputy Sheriff's Association of Bexar County released this statement: I support and stand by my members 100%. I ask that no member of our society rush to judge the incident simply based on the short video clip shown by the media. There are many facts in this case that the public are not aware of. I believe that when the investigation is complete, the members that I represent will be cleared of any wrong doing. This is a difficult time for many and rightfully so. I have total confidence in the process and patiently await the outcome of the investigation.

The Express-News reports that two law enforcement officials who spoke to the paper on the condition of anonymity, told a reporter that Flores did have a knife and at one point lunged at one of the deputies, who defended himself with a shield.

"He would have stabbed the deputy if he did not have that shield," said one of the sources. The other deputy tried to use a Taser on Flores, but the probes didn't completely strike him. At one point, Flores tried to get back in the house, then into a personal car and also in a BCSO squad car, but couldn't.


According to the Express-News' sources, Flores kept telling the deputies they would have to kill him.

Flores was shot by the two deputies who were responding to a domestic disturbance, and the FBI has opened up a civil rights investigation into the shooting.

Congressman Joaquín Castro has called on Pamerleau to release a second video showing the altercation to the public and questioned why the sheriff's department is unable to say whether Flores was armed with a knife.

I don't get how there hasn't been a determination whether Gilbert Flores had a weapon; Sheriff has referred to a knife. Where's the knife?

Re: Sheriff's press conf - very professional/thoughtful. Still, when you talk about evidence in the 2nd video you should release the video.

The Bexar County Sheriff's Department has asked for patience and has cited an ongoing investigation for its reason not to release the second video or much more information about shooting.

In regards to the deputy involved shooting, we're asking for calm and patience. We are diligently working to complete...

Bexar County District Attorney Nico LaHood told Fox 29 that he expects the receive the case by the end of the week.

According to the Express-News, a review of radio traffic published on Broadcastify, a website that posts police, fire and EMS radio traffic, showed that Flores threatened "suicide by cop."

Authorities have called the shooting "troubling" and Flores' family has retained a high-profile law firm.

The family of Gilbert Flores, a San Antonio man who was killed by Bexar County deputies last Friday, has retained Thomas J. Henry Injury Attorneys to represent them.