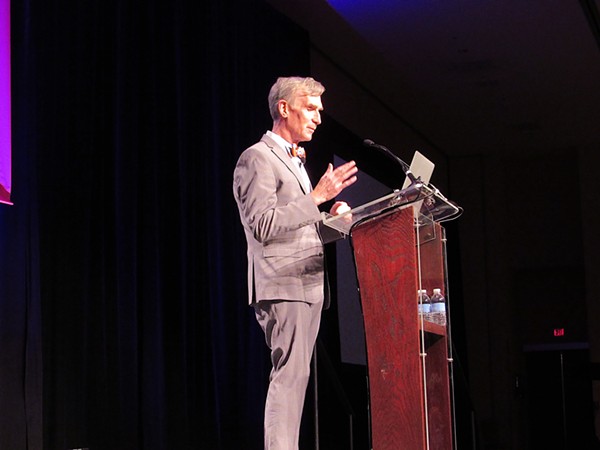 During his speech the renowned science communicator was unafraid to challenge his critics and to condemn the current administration’s skepticism of climate change.

“You may know that we have a president who has done his best to promote the idea that humans are not causing climate change, that its a Chinese hoax,” Nye said, referencing a tweet from President Donald Trump. “We’re living in this time where we have to convince people of scientific discoveries.”

“I’m here to say with all sobriety and gravity that we have never faced the likes of what we are up against right now,” Hons warned. “I can't tell if the Oval Office occupant himself has a strong feeling about Planned Parenthood, but he has appointed into the Health and Human Services agency a raft of people that have very strong and very negative feelings about us.”

Despite Nye addressing the dangers of political parties rejecting scientific information, the bulk of his speech promoted the benefits of renewable energy. During this portion of his speech the scientist emphasized his belief that Texas could become the leading source of wind power.

“The United States could be run renewably right now, if we just decided to do it,” Nye shared. “Right now in Stanton, Texas there are wind turbines casting shadows on the oil pumps. In the state of Texas it's so sunny and so windy, you all could run the whole place if you wanted to with almost two hundred thousand new jobs. It would not shock me to see oil fields converted to wind farms.”

The luncheon raised more than half a million dollars for PPST, which will use the funds to provide quality and nonjudgmental health services for men, women and teens of South Texas and the Rio Grande Valley. More than a thousand Planned Parenthood supporters were present while protesters of the organization objected the affair by displaying signs promoting alternatives to abortion outside of the venue. One poster encouraged drivers “honk for life” as they passed.

Patrick Von Dohlen, who ran for City Council in District 9 last year and is president of the San Antonio Family Association, took part in the protest.

“Bill is supposed to be pro-science, yet he is denying scientific evidence that a child is a distinct human being conceived in that woman’s womb,” Von Dohlen shared. “By claiming that abortion is quality care for women he denies statistics that prove women who have abortions are mentally and physically impacted for the rest of their lives.”

Von Dohlen is a staunch supporter of pro-life policies. In 2015 the San Antonio Family Association was behind the approval of a City Council ordinance which restricted future abortion clinics from moving into residential areas without proper public notification.

“It is unacceptable to me that laws, restrictions and regulations around women's healthcare disrespects the ability and the right for women to make choices about their own healthcare,” Zachry said passionately before Nye’s speech.

While Nye did not champion any particular policies, the scientist did show support for Planned Parenthood’s initiative to raise the quality of living for women and girls.

“The thing that gets me about the time that I grew up in and the time we’re living in now is how fast things have changed, and Planned Parenthood has been here since the very beginning,” Nye said.

Later, Nye shared his thoughts on how to improve society through women.

“What’s the one thing to do about climate change, if you want to think about the big picture? Raise the standard of living of girls and women,” he said.