Sen. Lois Kolkhorst filed a bill that would ban citizens, governments and entities from China, Iran, North Korea and Russia from purchasing land in the state, part of what she and other Republicans have said will help stem foreign influence in Texas. 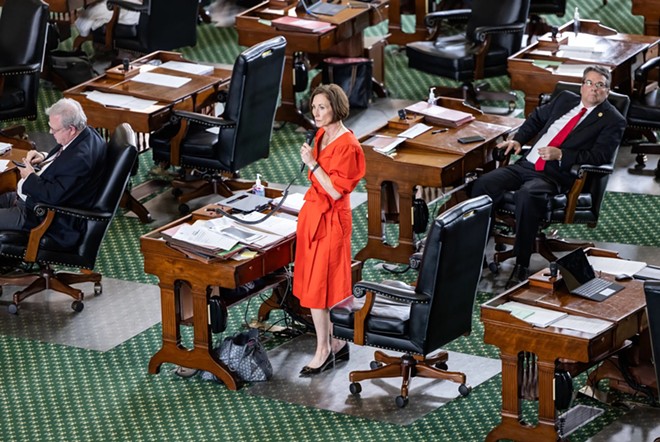 Texas Tribune / Jordan Vonderhaar
State Sen. Kolkhorst, R-Brenham, speaks from her desk on the Senate floor on May 30, 2021.
Gov. Greg Abbott said this week that he would sign a proposed bill banning citizens and foreign entities from four countries, including China, from buying Texas land.

Filed in November by Brenham Republican Sen. Lois Kolkhorst, Senate Bill 147 would ban citizens, governments and entities from China, Iran, North Korea and Russia from purchasing land here, part of what she and other Republicans have said will help stem foreign influence in Texas.

Opponents say the bill — and the GOP’s broader emphasis on threats from the Chinese government — is likely to further sow anti-Asian sentiment that has skyrocketed in recent years and will disenfranchise immigrants, business owners and green-card holders while doing little to address any national security concerns.

"If signed into law, this bill would make anti-Asian hate state policy," the Houston chapter of the Council on American-Islamic Relations said Friday. "It would violate the fundamental rights of not only citizens of other countries regardless of their relationship to their governments, but also Green Card holders and possibly dual citizens.”

Others echoed those concerns this week.

“The bill doesn't say, ‘military bases,’” said state Rep. Gene Wu, whose Houston district encompasses a large Chinese American population. “There is no discernment about what type of land is being purchased or who is doing the purchasing. … It targets individuals indiscriminately.”

Wu also feared that the Chinese government could retaliate over the ban and that it could complicate the ability of businesses of all sizes in the U.S. to work with Chinese counterparts or compete in an increasingly globalized marketplace.

The proposal follows a 2021 bill that banned Texas businesses and government officials from making infrastructure deals with interests from the four countries.

That legislation, which passed unanimously, was filed in response to a Xinjiang-based real estate tycoon’s purchase of roughly 140,000 acres for a wind farm in Val Verde, a small border town near Laughlin Air Force Base.

Kolkhorst said her bill was similarly prompted by concerns over “growing ownership” of Texas land by foreign entities.

“The time to address adversarial countries acquiring land is before it becomes widespread, not after they already control substantial amounts of Texas,” she said earlier this week. Late Friday afternoon, Kolkhorst said in a statement that the bill "will make crystal clear that the prohibitions do not apply to United States citizens and lawful permanent residents."

She also added that the bill "does not prohibit foreign business investment in Texas, because companies may still do business by leasing land and buildings."

Kolkhorst’s proposal comes amid a wave of bills and rhetoric targeting China.

“Communist China, America’s greatest foe, is on a bender,” Agriculture Commissioner Sid Miller wrote in an op-ed last year that called for such a ban. “They are buying up farmland across the United States and Texas.”

But taken together, investors from the four countries account for a tiny sliver of foreign-owned farmland both in Texas and nationally: Chinese investors own about 383,000 total acres of U.S. farmland — about 600 square miles — which is less than 1% of total, foreign-held acreage, according to the United States Department of Agriculture’s 2021 land report. Investors from Russia, Iran and North Korea collectively own less than 3,000 acres, according to USDA.

Canadian investors account for about 31% of foreign-own farmland in the United States — by far the largest share — followed by investors from the Netherlands at 12% and those from Italy at 7%.

In October, Republicans in the U.S. House of Representatives called for an investigation into foreign land investment nationally. Former President Donald Trump, who is running for the White House again, and Florida Gov. Ron DeSantis, who is considered a top GOP presidential contender should he run, have recently said they support such bans. And, citing the Chinese Community Party, U.S. Rep. Chip Roy, R-Austin, proposed federal legislation this week that would similarly ban Chinese land investments.

Wu, the Houston lawmaker, said the bill is reminiscent of other pieces of anti-Chinese legislation dating back to the 1882 Chinese Exclusion Act — a 70-year prohibition on most Chinese immigration that the United States did not apologize for until 2012. He questioned why China is included in the bill — and why the country has been a focal point of Republican Party messaging — while many other countries escape scrutiny.

“We oppose communist countries, right?” he asked. “Where's Cuba? Where's Venezuela? Where’s Vietnam? You say that we oppose countries that are hostile to our country? Great, where is Saudi Arabia? Where is Afghanistan? Where are all these other places that have caused our country harm? It becomes a real slippery slope.”

“The Asian population is the new scapegoat,” he added.

Clarification, Jan. 21, 2023: A previous version of this story quoted Rep. Gene Wu responding to the bill targeting foreign-land ownership by asking, "Where is Saudi Arabia? Where is Pakistan?" Wu later said he misspoke and meant to say Afghanistan, not Pakistan.