Bonehead Quote of the Week: Donald Sterling On African-Americans

Send a News Tip
Just days after the national fiasco sparked by disparaging remarks toward African-Americans made by Nevada rancher Cliven Bundy, an audio recording of Los Angeles Clippers owner Donald Sterling making racist comments emanated, causing a similar firestorm of controversy. You likely know the story by now: During a conversation with his San Antonio born and raised, girlfriend V. Stiviano (who, by the way, is of both Mexican and black descent), Sterling (who, by the way, has a wife) warns her not to be seen publicly with African-Americans (audio recording here): 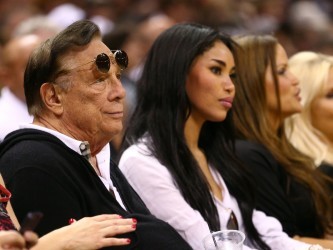 "It bothers me a lot that you want to broadcast that you're associating with black people. Do you have to?"

"I'm just saying, in your lousy [expletive] Instagrams, you don't have to have yourself with, walking with black people. ... Don't put [Magic Johnson] on an Instagram for the world to have to see so they have to call me. And don't bring him to my games."

When Stiviano asks the obvious, “Do you know that you have a whole team that's black, that plays for you?” Sterling replies in his paternalistic racist glory, “You just, do I know? I support them and give them food, and clothes, and cars, and houses. Who gives it to them? Does someone else give it to them? Do I know that I have—Who makes the game? Do I make the game, or do they make the game? Is there 30 owners, that created the league?”

Sterling: It's the world! You go to Israel, the blacks are just treated like dogs.

Stiviano: So do you have to treat them like that too?

Sterling: The white Jews, there's white Jews and black Jews, do you understand?

Stiviano: And are the black Jews less than the white Jews?

What makes the case especially disturbing is the fact that it’s far from his first racial offense. Sterling has a long history of discrimination that shows he isn’t just talk but action. As the once largest landowner in Beverly Hills, Sterling garnered a reputation for not renting out to minorities, a practice that compelled a former employee to slap him with a housing discrimination lawsuit. (One of his alleged remarks: “And it's because of all of the Mexicans that just sit around and smoke and drink all day,” he said of the apartment’s odor. "So we have to get them out of here.”) Sterling ending up having to shell out nearly $3 million in a settlement—the highest payout for a housing discrimination rental case brought by the Department of Justice, according to the Los Angeles Times.

While he’s been banned for life from the NBA, denounced by the President (and by our very own Spurs coach Gregg Popovich) it’s still worth wondering how high-powered figures like Sterling—a documented racist with actual power and influence— can ascend in the public sphere, even picking up civil rights lifetime achievement awards in the process.