Republican U.S. Reps. Tony Gonzales and Chip Roy landed big, fat Fs — an 18 and a zero out of 100, respectively. 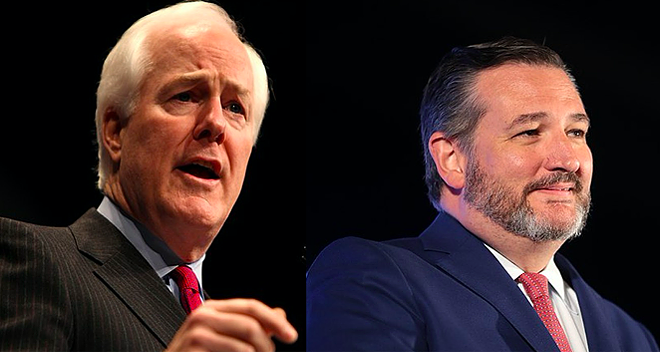 Wikimedia Commons / Gage Skidmore
Sen. John Cornyn got an 14 out of 100 on the Human Rights Campaign's latest scorecard, while Sen. Ted Cruz got a goose egg.
Two members of San Antonio's congressional delegation, along with both of Texas' senators, got failing grades on Human Rights Campaign's annual scorecard, which measures federal lawmakers' attentiveness to LGBTQ+ issues.

U.S. Reps. Lloyd Doggett and Joaquin Castro, both progressive Democrats, landed scores of 100 out of 100 on the advocacy group's scorecard, while moderate Democrat U.S. Henry Cuellar ended up with an 84.

Sens. John Cornyn and Ted Cruz, both Republicans, also received abysmal marks. Cornyn scored a 14, while Cruz, one of the most extreme members of the Senate GOP caucus, got a zero.

For its scorecard, HRC awarded points to elected officials based on a range of factors, ranging from their support of pro-equality legislation to their confirmation votes for pro-LGBTQ+ cabinet officials.

In the House, HRC looked at candidates' votes whether to pass pro-equality legislation including the Respect for Marriage Act and Equality Act. In the Senate, the group factored in votes for pro-LGBTQ+ cabinet officials and judicial nominees.

“On the eve of the 2022 midterm elections, the Congressional Scorecard for the 117th Congress is an indispensable guide to understanding which members of Congress could be relied upon when LGBTQ+ equality was on the line during the past two years, standing up for a marginalized community facing some of the gravest threats it has ever seen," HRC Interim President Joni Madison said.