Cheap, Good, and Good For You

Saigon Express gets back to basics 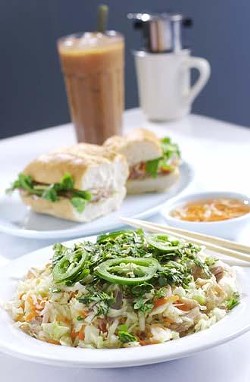 
Raspberry would be good. So would lime, creamy vanilla, orange sherbet, blueberry, even a dark and tarry licorice - but not chocolate or caramel. No, I'm not talking ice cream flavors. This is a list of the colors that you might consider wearing when you visit Saigon Express. The restaurant's interior is the most amazingly intense light blue I have ever encountered in a restaurant, and since there is nothing on the walls to compete, you are it. So don't clash. (To the woman with the raspberry blouse - who prevailed on the congenial owner to allow her to come back and pay later - you're the inspiration for all this.)

There is much about Saigon Express that isn't quite up to speed. The credit card machine hadn't yet arrived (which is why Raspberry had come up short), art is sorely lacking, certain menu items have been MIA, but there is nothing half-finished about a bowl of P-1 special pho - despite the fact that you are expected to add garnishes to your liking. With some renditions of this Vietnamese classic soup, you have to wait for these flavors - bean sprout, cilantro, Thai basil, lemon, and jalapeño - to kick in before things get interesting. A squirt of sriracha, the fiery Asian chili sauce, is sometimes required. But not at Saigon Express: The soup tasted great from the get-go. Yes, you have to deal with the usual annoying and difficult tangle of rice noodles, but there is plenty of rare, sliced steak, brisket, and gelatinous "tendon" afloat in the savory broth. The flavors are mysteriously spicy in a mellow, inscrutable way.

I had asked for a small version of the P-7 beef meat balls soup, and in the confusion about its unavailability, I got a large P-1 instead. Don't make the mistake of thinking that a typical Yankee soup-and-sandwich pairing is possible here - not with the French sandwich and large soup, at least, and probably not with the small soup, either. The banh mi thit, or French sandwiches, are almost enough by themselves. The F-B is served in a toasty, long roll that's almost good enough as well: a real baguette, of course, would be better. The roast pork's best (although not necessarily major) ingredient hints of star anise and other typical spices; there is also an enigmatic smear of paté. Then the vegetables take over: cucumber, shredded carrot, and cilantro.The combination is altogether pleasant but not entirely compelling. Sandwiches - at least F-B - may not be SE's strongest suit.

Summer rolls, one of the original wraps that fast-food America would have you believe it invented, appear alongside the typical spring and egg rolls on Saigon Express' relatively limited menu, and they are worth your time and (minimal) effort. The uncooked rice paper wrapper is tender, the shrimp show through it in a translucent teaser, and the usual shredded vegetables, vermicelli, and bean sprouts comprise the rest, along with what appeared to be very thin slices of mystery meat. (Not that it was suspicious; rather that the pieces were so delicate as to resist identification.) A hoisin-like sauce with chopped peanut is provided for dipping, along with a small bowl of sweet-hot chili sauce. Use both, together or separately, as you wish; each works to enhance the rolls' fresh but not assertive flavors.

Besides the art and credit card machine, something else is lacking at Saigon Express: noise. You might not notice it immediately, but there is no background music. Neither is there a beer and wine license, so the level of conversation is consequently diminished, too, although that you would expect as well from the number of patrons: not yet huge, in other words. The curious result of all this - especially if the voluble owner isn't telling his war stories to the adjacent table - is that you can hear the kitchen. The chopping, the clang of utensils, the occasional bursts of (we assume) Vietnamese ... all this seems directly at play on your order, and although this is perhaps a self-centered assumption, it is nevertheless comforting.

Much chopping was certainly involved in the preparation of B-2, the bowl of cold vermicelli with bean sprouts, finely shredded carrot and cucumber, cilantro, tiny pieces of pork, a skewer of small but well-flavored shrimp, and a few peanuts. Your waiter will likely put together a dressing, whose major components are a mild fish sauce and a jolt of chili sauce; use it with abandon. At $6.95, this complete dinner was a dollar less than the over-upholstered national-chain burger I was obliged to taste at lunch, and it both tasted great and seemed virtuous. Cheap, good, and good for you; what more can you ask?

Saigon Express bills itself as serving "popular Vietnamese cuisine," perhaps a code for lack of pretention. Certainly there is no lack of genuine, if simple, sophistication. The Vietnamese chicken salad - the one entry that merits a "delicious" on the menu - is a good case in point. It claims to be chicken tossed with lightly seasoned vegetables with marinated, shredded cabbage - and that's what it is. The seasoning is truly light - as is the marinating - but once again you can top the salad with that fish sauce/chili sauce double whammy. The textures and tastes work without fanfare and folderol.

The only folderol, therefore, is on your part. Raspberry, remember. •