Many of the compounds used to treat water from the Edwards Aquifer are unregulated, even though some are associated with increased cancer risk. 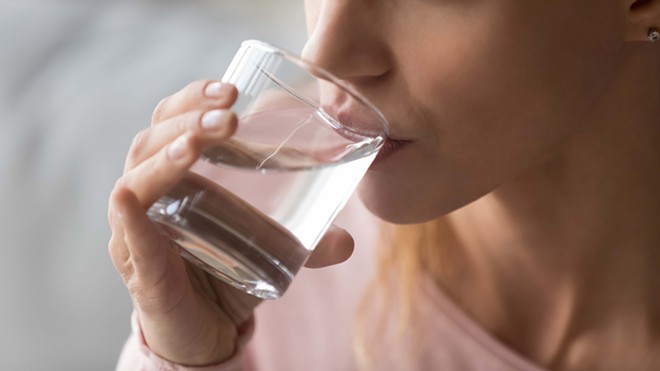 Shutterstock/ fizkes
New attention is being paid to contaminants that are byproducts of that treatment.

For decades, stewards of the Edwards Aquifer have strived to limit development over San Antonio's key source of drinking water.

Waste from people, pets and agriculture creates the potential for biological contaminants in the aquifer that stretches under 8,000 square miles in Central Texas. Impermeable cover such as roads and parking lots channels that waste into creeks and sinkholes and, ultimately, the aquifer. That can result in blooms of bacteria including coliform and E. coli with the potential to seriously sicken humans.

Public health experts aren't just concerned about those organic contaminants but what happens when the Edwards' water is treated for public consumption. New attention is being paid to contaminants that are byproducts of that treatment — compounds with tongue-tying names like trihalomethanes that are created when chlorine eliminates organic matter from treated water.

Many of those compounds are unregulated, even though some are associated with increased cancer risk.

"What's legal and what's allowed in the water does not necessarily mean safe," said Sydney Evans, a science analyst with nonprofit advocacy organization the Environmental Working Group. "There are health risks between the health guidelines and the legal limits."

Though these compounds show up in San Antonio tap water, they're either unregulated or appearing at limits below those set by the Environmental Protection Agency. But public health experts are concerned there's not enough information about them, and what happens when a multitude of contaminants are present in drinking water.

An analysis by the Environmental Working Group, which offers tap water safety recommendations that are far more stringent than the EPA's, reports that there are 15 contaminants in San Antonio Water System water that exceed its suggested levels, almost all of them potentially cancer-causing.

Evans said byproducts of decontamination are often associated with bladder cancer, while other contaminants in San Antonio water are associated with bone and colorectal cancer. The Environmental Working Group guidelines are stringent — the recommendations for trihalomethanes "represents a one-in-one-million lifetime cancer risk level" according to the database — but Evans said those risks increase with each type of contaminant found in the water.

"The higher those levels, even at legal limits, there's a health risk there," Evans said. "And reducing those is what we'd like to see, because the regulations need to be updated to keep up with the science."

The Alamo City has been blessed with an exceptional source of water. With pools 3,000 feet below the surface and hundreds of fast-flowing artesian wells, the karst carbonate Edwards Aquifer provides most of the water used by the San Antonio Water System and some smaller utilities in the region.

Any Hill Country resident who's dug a post hole has probably come across a slab of limestone that looks like a cross section of a giant, worm-eaten apple. That's because rainwater is mildly acidic and slowly eats through the carbonate limestone under the Hill Country, creating uncounted pathways for water, some tiny, some huge.

For a water source to nearly 2 million people, this can be a boon. The aquifer quickly replenishes itself.

But it's also "a double-edged sword," said Ron Green, a groundwater hydrologist and president of the board of the Greater Edwards Aquifer Alliance. Edwards water and anything washed into it by recent rain moves quickly through those "preferential flow paths" — the wormways through the limestone.

"These contaminants that get slushed into the aquifer somehow, they can get into these public supply wells and be disseminated in the community within hours to days," Green said. "It's a prolific aquifer, and it responds very quickly to rain events. It's not being dewatered like other aquifers. After a good rain, it's going to come back to good levels quickly. But the downside is that if you get some sort of a pathogen washed into the aquifer, it can go right into the public water supply in San Antonio in a very short time."

SAWS is required to monitor tap water, but it also monitors the wells at its source. If bacteria levels spike, the utility can cut off one well and has a diverse enough water supply to replace it with others, officials said.

Of its nearly 100 Edwards Aquifer wells, SAWS officials said those at most risk are those it inherited from the old BexarMet Water District — which the utility absorbed in 2012 along with some of its wells with a smaller protected area around them — and those near the Edwards Aquifer Recharge Zone, a 1,250-square-mile strip that passes through northwest Bexar County where faults and fractures let water plunge into the aquifer.

To track water quality, "we're doing a substantial amount of monitoring within the system that is beyond what we're actually required to do," said Kirk Nixon, SAWS's manager for resource, protection and compliance.

Nitrate and nitrate — associated with fertilizer, septic tanks and urban runoff — both appear in San Antonio tap water at levels above those recommended by the Environmental Working Group and at levels higher than state and national averages. Even so, the amount is still lower than what's allowed by the EPA.

However, the byproducts of adding chlorine to eliminate dangerous bacteria and other organic matter account for most of the contaminants found in SAWS tap water, according to experts.

"If the source water is somewhat contaminated, it has some organic matters, then these organic matters and the chlorine react and then produce these disinfectant byproducts," said Taehyun Roh, an assistant professor at the Texas A&M School of Public Health's department of epidemiology and biostatistics.

In January, the EPA will begin a two-year analysis of contaminants it doesn't regulate, such as bromodichloromethane and dibromoacetic acid, byproducts of disinfection associated with cancer that appear in SAWS water at levels above the national average. 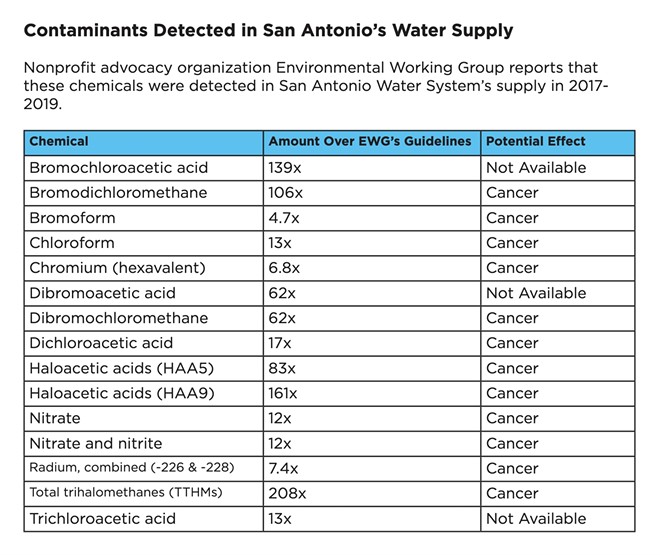 The Environmental Working Group maintains a tap water database, using data from regulatory agencies to track the amount of contaminants in public drinking water and comparing those to its own recommendations.

While there remains a lack of data about the impact of many drinking water contaminants, the EPA's regulations aren't based solely on health impacts, A&M's Roh said. The regulatory agency considers other factors, like how many water systems in which a contaminant is found and the potential cost of more stringent limits.

What's more, the EPA has limited data about the cocktails of contaminants that are showing up in drinking water more frequently.

"We don't have enough information about long-term exposure," Roh said. "At the same time, we are not just exposed to single water contaminants."

He noted that many of the Environmental Working Group's recommendations are nonbinding goals set by California's Office of Environmental Health Hazard Assessment.

While EWG does promote filters, Evans cautioned against relying on bottled water. She said the most important way to improve water quality is to get at what's contaminating source water.

To that end, the City of San Antonio and SAWS have invested in purchasing easements to reduce development over the recharge zone. They also have a review process for building permits where the recharge zone lies within city limits. SAWS's Nixon said the utility takes steps to ensure treated water doesn't sit in pipes for too long, when chlorine can continue to react with harmless organic material and create new disinfectant byproducts.

Green, the San Antonio hydrologist, said he's collected decades of waterquality data from state regulators, which he plans to analyze to see if he can document an increase in bacteria and other pathogens.

"High density development is going to degrade the quality of water recharge," he said. "Once we get that information compiled, we want to see if there are already increases in pathogens and contaminants being detected in the San Antonio Water System."

He added: "Unfortunately, water utilities and state regulators are not compiling that summary information."

Like so many environmental issues, global warming looms over water quality as well.

"Usually, the problem is when the water temperature increases, the bacteria level can be increased," Roh said. "Then we need to use more chlorine."