Abbott late Wednesday announced Chicago would be a new destination for migrants bused from Texas in his strategy to draw attention to the influx of people at the southern border. Chicago leadership welcomed the migrants 'with dignity and respect.' 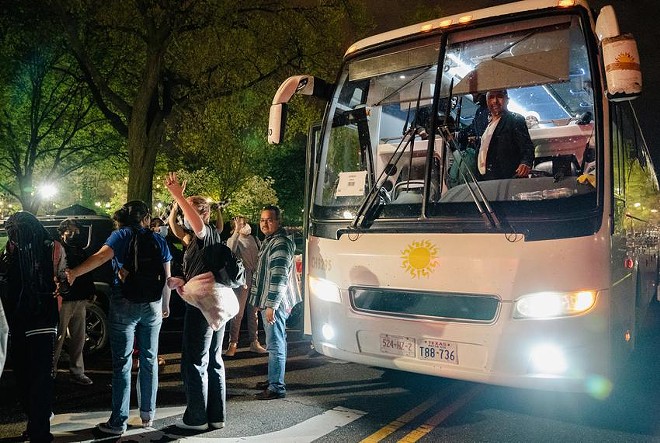 Texas Tribune / Shuran Huang
Two buses transporting migrants from Texas arrive at Union Station in Washington, D.C., on April 21.
Gov. Greg Abbott announced late Wednesday that Chicago is the latest destination to which Texas will bus migrants as part of a strategy to bring attention to the influx of people arriving from the southern border. Abbott began busing thousands of migrants from Texas border communities to Washington, D.C., and New York City earlier this year.

Abbott’s busing strategy has so far cost the state of Texas more than $12 million before Chicago was announced as a destination.

According to statements from both officials’ offices, 60 migrants arrived at Chicago’s Union Station on Wednesday evening. Lightfoot’s office said the city worked with departments, agencies and community partners to provide essential services to the migrants who made the journey from Texas to Illinois.

“As a city, we are doing everything we can to ensure these immigrants and their families can receive shelter, food, and most importantly protection. This is not new; Chicago welcomes hundreds of migrants every year to our city and provides much-needed assistance,” Ryan Johnson, the mayor’s deputy director of communications, said in a statement to the Texas Tribune.

Abbott’s office could not be reached late Wednesday.

Johnson criticized former President Donald Trump’s immigration policies as discriminatory and racist and said they have encouraged strategies like Abbott’s to bus migrants across the country.

“Unfortunately, Texas Governor Greg Abbott is without any shame or humanity. But ever since he put these racist practices of expulsion in place, we have been working with our community partners to ready the city to receive these individuals,” Johnson said.

The program to send migrants to the other cities is part of Abbott’s multibillion-dollar effort to curb border crossings. As a way of antagonizing President Joe Biden over his border policies, Abbott began in April sending migrants who volunteer to accept the rides to Washington. The move drew mixed reviews across the state and sent Washington officials scrambling to accommodate an influx of asylum-seekers. Abbott expanded the program in August, sending migrants to New York City, a move Mayor Eric Adams has called “inhumane.”

In total, more than 7,400 migrants have been bused to the nation’s capital, and over 1,500 have been sent to New York City, according to the governor’s office.