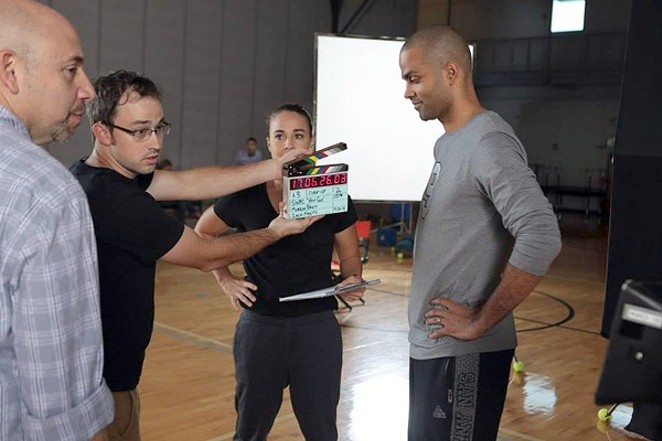 Courtesy
SA production company GeoMedia shoots an SWBC commercial with Spurs guard Tony Parker and assistant coach Becky Hammon.
The Texas Legislature was not a friend to filmmakers last year when it slashed $32 million from an incentive program that's meant to lure movie producers to the Lone Star State.

The decision hit San Antonio's motion picture economy hard because the city's film incentive, which is the most generous in the state, is tied to that state funding. This complicated matters for the city, which was already struggling to attract movie producers. "Up until 2007, we had about a dozen films made here every year," Department for Culture and Creative Development Interim Director Debbie Sittre told City Council members on Wednesday. "So we were doing very well."

The Texas Moving Image Industry Incentive Program was established in 2007 to help the Texas compete with states like Georgia and New Mexico, which were seeing a boon in movies being shot there, sucking business away from Texas because of better financial incentives. New Mexico, for instance, which funded their incentive programs through a 25 percent income tax rebate that caused producers to flock to the state, resulted in a $3 billion economic impact there. Texas does not have an income tax, and funding in the state's incentive program is reliant on general budget funding, which can be shaky, at best, for the arts.

But despite the incentive fund, the city began to struggle as other Texas cities, like Austin, were doing a better job at attracting filmmakers. So in 2012, San Antonio created its incentive, which utilizes taxes levied on visitors who stay at hotels in here. Still, the city continued to struggle to attract moviemakers. "We have 11 film festivals where Austin has 31," she said, explaining that a robust film culture is also needed to attract movie producers because it shows that the medium is valued. San Antonio was going to need way more than just a financial incentive if it was going to be competitive, Sittre explained.

However, Sittre thinks there should be a complete shake-up of how the city attracts film producers. She spoke to City Council Wednesday about implementing a strategic plan to turn the sagging film economy around. And the plan starts with bolstering the financial incentive, which is a 2.5 percent reimbursement based on how much a producer spends here. They get a check when a project is complete and the Texas Film Commission has verified those expenditures. That's on top of the state's contribution, which can run between a 5 and 20 percent reimbursement based on a project's expenditures.

Sittre proposes raising the local contribution to 5 percent with the caveat that the increase only happens if state funds are not available. But to do this, the city's incentive needs to be separate from the state's. "We may need to revise San Antonio's supplemental incentive, because right now, it’s tied to state dollars," Sittre explained. "So if they don’t have any money, we can’t spend our money. The idea is to separate those." Still, attracting more movie makers from California will take more than increasing the local film incentive.

For instance, there's the workforce factor. San Antonio has all the bits and pieces: studios, makeup artists, actors, set builders and companies that rent equipment. But San Antonio doesn't have a database where an interested producer can find out everything the city's workforce has to offer. Austin does. "We need a database so that LA producers know that we are here," Sittre said.

But creating a database and doubling the local incentive still won't be enough to jumpstart San Antonio's movie economy. Sittre said the city needs to build on its existing workforce and find a way to provide more facilities for filming. It needs to attract more professionals. The city has to be more open to waiving certain permits. And San Antonio needs to market itself. "Films need to be able to use city brands to highlight the community. We need local businesses investing in the film industry," Sittre said. "We need local projects that receive national recognition. And we need international and major film festivals. We can do better than we do now with film festivals."

The Department for Culture and Creative Development will unveil its strategic plan on August 25 from 6 to 8 p.m. at the Guadalupe Theater where they'll ask for final feedback on the plan before it heads to City Council in September. "We want to make sure that nobody's voice is left out," Sittre said. If the community is behind the plan and City Council signs off on it, staff would begin implementation of the strategic plan on October 1.