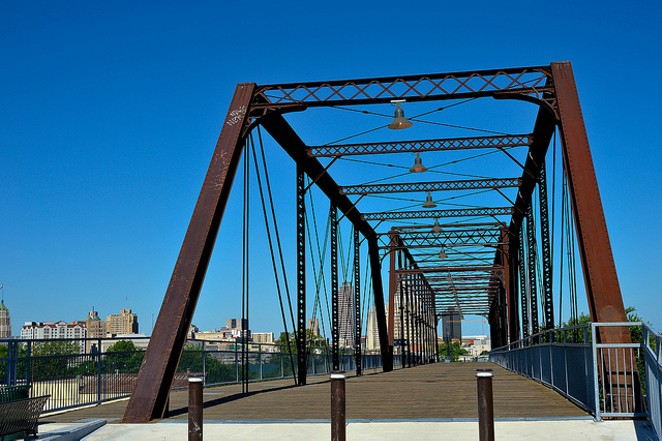 There were no shortage of reasons Wednesday for members of the city's Historic Design Review Commission to reject a developer's plans to build a 148-unit, four-story apartment complex at 803 N. Cherry St. — a mere 53 feet north of the iconic Hays Street Bridge.

"I really want to support this project," said Commissioner Daniel Lazarine, who represents District 2, where the property lies. "It could be a prime example of good development in this lot. But I just don't think the execution is there...it's disappointing."

The HDRC meeting, which included more than 2 hours of community testimony, lasted late into Wednesday evening. It took place just a week after the co-developers of "The Bridge" apartments, Loopy Ltd.'s Mitch Meyer and Alamo Beer's Eugene Simor, held its first neighborhood meeting in which they allowed community feedback. Despite a landslide of feedback, nothing about the design had changed since the November 29 meeting.

In defense of the project, the developers' lawyer James McKnight said that his clients went above and beyond the required design guidelines provided by the city. The complex could have been taller, uglier, without parking, and without any greenery to hide its ground-level parking lot from passers-by.

"For a project that is under this much scrutiny ...  I think there should be a much higher degree of accuracy," Lazarine said.

Commission Chair Michael Guarino scolded Meyer and Simor for shrugging off commissioners' earlier requests for more data and documentation. Meyer pleaded with them to reach a compromise.

Simor did not speak Wednesday night.

Of the nearly 50 citizens who signed up to speak, only seven were in support of the project. Most of those in support had recently moved into the Dignowity Hill neighborhood — home to the 136-year-old bridge and its surrounding property.

Resident Barbara Garcia said residences right next to the bridge will deter crime, like the public drinking and graffiti she said plagues the bridge. Plus, she added, the apartments (with rent starting at $1,000/month) would be affordable compared to some of the skyrocketing rental prices in the neighborhood.

But dozens of longtime neighbors opposed to the construction said those prices are still far out of the community's price range, and arguing that developers are taking advantage of the vulnerable community to profit off the newly-hip slice of the city.

"This hideous complex ... would not be allowed in King William, or other historic districts in San Antonio," said former District 2 City Councilman Keith Toney. "This will not advance our community at all. Help the East Side help ourselves."

Toney said he's not against development — he even backed the equally-contested 2014 development of Simor's Alamo Beer brewery, which now sits on the opposite side of the bridge from the lot Simor's hoping to build apartments on.

"But this — this is trickery," Toney went on. "We can't let trickery triumph over truth. Don't let someone do something just because they can. That's the definition of a bully."

A major contributor to the community's opposition to this project is based on how Simor ended up with the land in the first place. According to members of the Hays Street Bridge Restoration Group, the neighborhood organization who formed in the '90s to successfully save the bridge from destruction, the city had promised the community it would turn the empty lot north of the historic bridge into a public park. That park would have bathrooms and drinking fountains for people visiting the bridge, and keep building from popping up and blocking the now-iconic views of the bridge.

This agreement (made in a 2002 memo) is why the restoration group decided to sue the city a decade later, when officials announced it would be more or less gifting the property to Simor. That case has been winding itself through the county and state court systems ever since — and both the city and the community are still waiting to hear who truly owns that property.

In the meantime, however, Simor's been allowed to continue moving forward with developing the property under the assumption it belongs to him.

After Wednesday night's 5-1 vote against the development, Meyer wouldn't say if — and when — he'll submit a new design to the HDRC. And while opponents of the apartments left relieved, they know the bigger fight over the property is far from over.

"[The developers] will be back, I'm certain of it," said a man (who asked to remain anonymous), as he left the meeting into the rainy night. "But so will we."