Send a News Tip
Nearly 60 residents of a South Side mobile home park filled City Council chambers Thursday to protest a zoning change that would allow developers to uproot them and replace their community with a high-priced luxury apartment building. Despite their emotional pleas over the course of roughly four hours, Council approved the plan in a 6-4 vote. 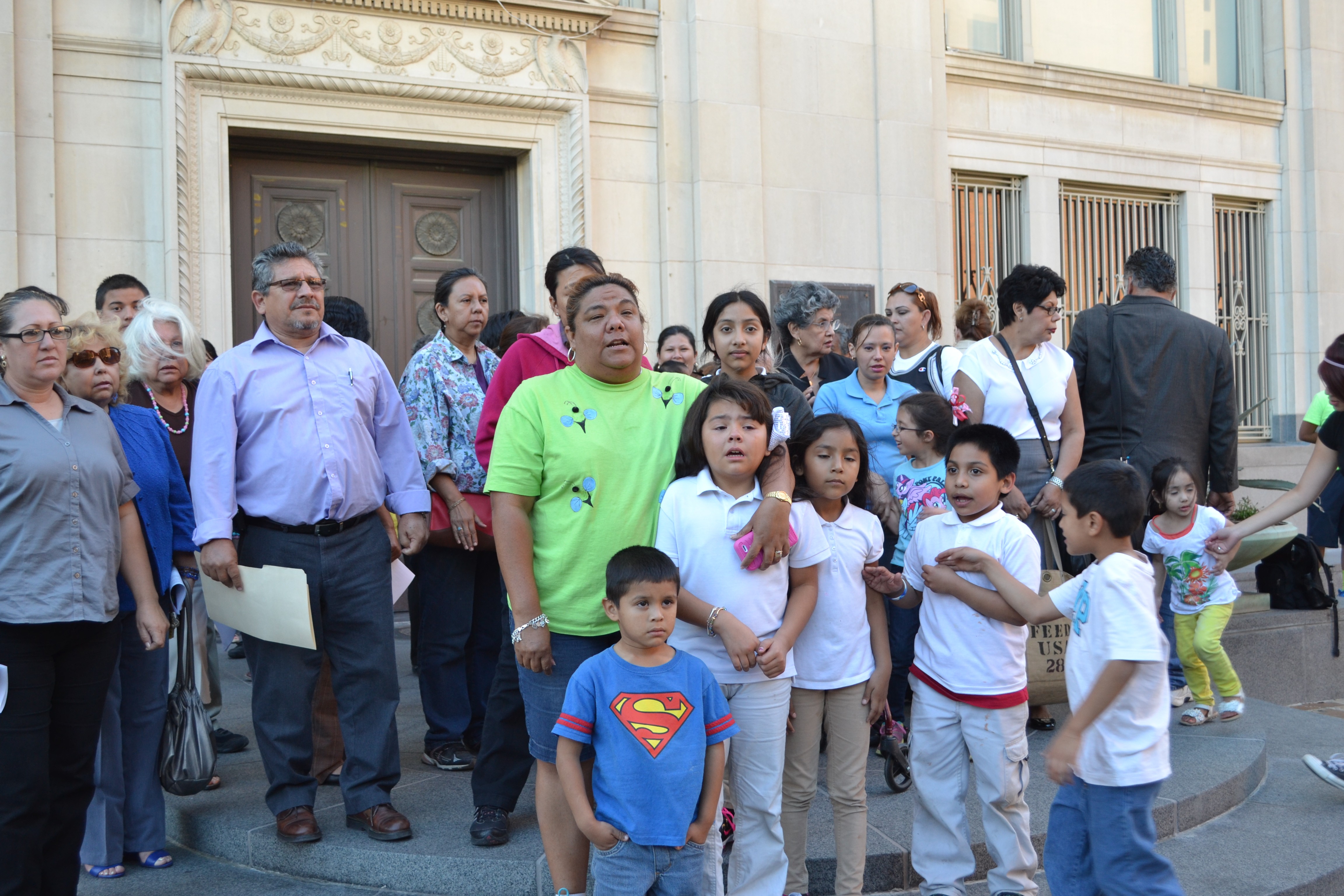 Resident of the Mission Trails Mobile Home Park gather outside City Hall chambers after a vote to rezone and displace them was taken. Photo by Mary Tuma.

Mission Trails Mobile Home Park owners American Family Communities have sought rezoning for the 21-acre tract of land from “manufactured housing” to commercial and multi-family, allowing local developers White-Conlee to build a $75 million luxury riverfront apartment development in its place. The deal will effectively displace the roughly 300 largely low-income residents from their homes, as the Current previously reported.

“There has been too much concern and too much of a red flag over this recently. We need to be smarter about how we handle the issue of gentrification in this city,” said Castro.

District 3 council woman Rebecca Viagran, who represents the citizens of the Mission Trail homes, expressed sympathy for the residents and said she supported the measure after much consideration. For Viagran, the decision was between aiding the residents in buying their own property, which would cost $40-65,000 each or ensuring the developers held up their end of the deal. She said she could not ask residents, many on fixed incomes, to shoulder the monetary burden.

“None of you will be left behind [

] or kicked to the curb,” said Viagran. “I will do what I can to fight for you.”

Dozens, including young children and representatives from advocacy groups delivered heartfelt and oftentimes teary-eyed requests to vote against the rezoning proposal. They pointed to the mass displacement of students from schools and from the tight-knit community several described as “family.” Many sick and elderly testifiers also worried about the loss of proximity to doctor’s offices and accessible medical care, while others said they experienced deteriorating health due to high levels of stress, caused by the potential uprooting.

“I have my doctor close by, I don’t know what I’m going to do,” said Elida Contreras, speaking in Spanish, translated by an interpreter.

Echoing several of the testifiers, resident Linda Martinez called the rezoning an "injustice to all."

In a 5-2 vote, the proposal was shot down by the City Zoning Commission on March 18. It hit City Council agenda on April 17, where dozens of residents showed up to testify. Convinced that the heated proposal didn’t get enough dialogue between the developers, owners and residents, District 1 council member Diego Bernal moved to delay a final vote until today.

The mobile home residents have cited a lack of transparency in the process, contending developers and the owners failed to alert them of the possible sale. However, under Texas law, the City is only obligated to alert the landowner of rezoning changes and not the residents, who pay rent on a month-to-month basis, but residents wished they were notified out of respect.

Developers argue they have provided the mobile home dwellers with a generous offer, that was recently increased from $2,000 to $5,000: they promised to subsidize moving expenses and hookup fees when transitioning residents to other trailer parks and will provide a $2,500 rent discount to residents and an additional $2,500 from the property buyer if the move occurs before Aug. 15. Bill Kaufman, attorney with White-Conlee, said his group did their best to find “common ground.”

However, residents felt they were being shortchanged and many others said money cannot replace what they will be losing.

As for residents like Christian Amador, a college student who also helps support his family after his father began suffering health problems, the decision made today has ripped apart any sense of stability and security.

“I’m devastated,” Amador told the Current following the vote. “I work and go to school close to home now, if we move, life will get much more complicated for us. I’m not sure what we’re going to do.”

For the full story check back at sacurrent.com