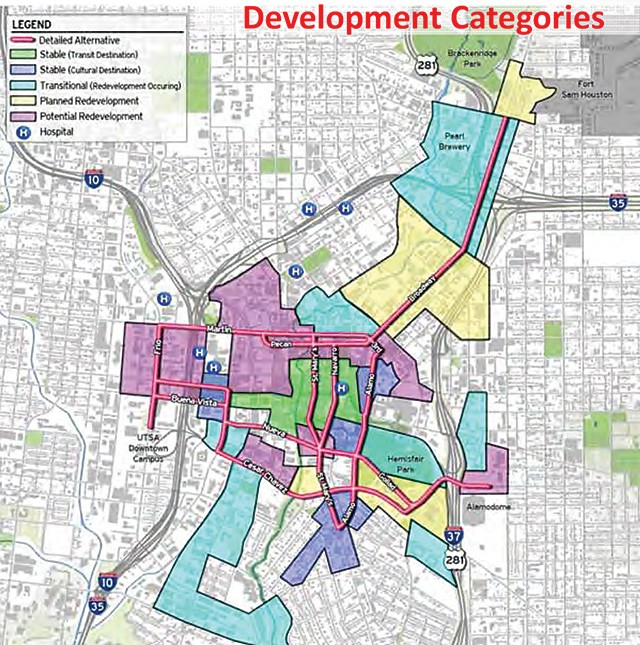 In the 1980s, there was the dream that the new Fiesta Plaza mall would open up the near west side of downtown to a development boom. There was also the promise that the revitalization of St. Paul Square would transform the near East Side around the old Sunset Station.

In the 1990s, there was the dream that the reuse of the old International and Great Northern Railroad station as the home of the City Employees’ Credit Union would spur the renewal of Cattleman’s Square on the near West Side. And the promise that the work of the Zachry Company and its partners would create a booming new strip of retail and restaurants leading to an exciting entertainment venue at Sunset Station on the near East Side (again).

There were promises of what a new downtown campus of UTSA would bring, of what the Alamodome would generate, of what the new VIA Ellis Alley Park and Ride on the East Side would produce.

Fast forward to today. Now there are a new set of promises and dreams, and a cast of development interests — some old, some new — poised to cash in on the latest can’t-miss “economic development” boon. They are dreams we’re all paying for: VIA’s new downtown streetcar. VIA’s sales pitch is that the planned streetcar and the SmartMove package of transit improvements will “increase mobility for everyone,” “ reduce… traffic congestion,” and “reduce sprawl.” But it’s not going to reduce much of congestion along a very short stretch of Broadway, or increase “mobility” unless you’re trying to go to the Robert Thompson Transit Center next door to the Alamodome. It’s really a development deal, backed by the same cast of folks who have long wanted to turn old warehouse and empty office buildings into profits for themselves.

The case for those development dreams was fully laid out to the VIA board in June, with a series of presentation slides on “Economic Development Potential,” neatly showing areas labeled “potential redevelopment.” Those “potential” areas include a large swath of the northern edge of the downtown core along Pecan and Martin Streets, the western area of Cattleman’s Square around VIA’s new multimodal transit center, a stretch of the southern edge of downtown along Nueva Street, and the East Side just north of the ’Dome. All of that “potential” zone around the downtown is in addition to a set of other areas: the light blue “transitional” area and the yellow “planned redevelopment” zone. In other words, the streetcar will be the means of boosting land value and “development” in a broad area in and around downtown.

That neatly fits with the quest expressed by former Congressman Charlie Gonzalez for “increased revitalization and redevelopment of San Antonio’s Westside neighborhood.” And it’s fully in accord with the comment of District 1 Councilmember Diego Bernal that the streetcar “would make San Antonio a world class city.” As more and more corners of the downtown environs seek their own “revitalization” and “world class” status, VIA is likely to focus on the largest, grandest, and most expensive vision of streetcar building, a cost we are all obliged to pay.

But while downtown property and development interests are busy salivating over the rewarding prospects of a streetcar, what about the rest of us? Will this grand streetcar vision really provide any transportation alternative? The proposed north/south route along Broadway wouldn’t reach the Witte Museum or the new Children’s Museum, just stopping at the front door of the Pearl Brewery. It wouldn’t reach the Central Library, Baptist Hospital, or San Antonio College — all activity centers that would benefit from the “connectivity” and “mobility” promised by the streetcar, all locales that would likely serve San Antonio residents rather than tourists. Instead, Alternatives 5 and 6 (the two possible routes presented by VIA last month) list connections to HemisFair Park, the Tobin Center, Lower Broadway, UTSA Downtown, and El Mercado. There are vague plans to extend the route up Broadway, toward SAC, and deeper into neighborhoods to the west, east, and south, but no funding as of yet.

Yet even as a means of spreading tourists and their dollars to a host of “Potential Redevelopment” areas around downtown, the streetcar scheme is seriously flawed. We’ve seen projects like Fiesta Plaza and Sunset Station, the former Museo Alameda, and Houston Street fail to blossom into the hubs of activity city leaders sold them as. What tourists appreciate is the concentration of people, activity, and visual interest along the River Walk. It’s proven enormously difficuly to move visitors off the River Walk, even just a few steps or a short elevator ride up to Houston Street. The notion that a streetcar will somehow do what the existing downtown trolley service hasn’t, and what a whole host of public development efforts have failed at, seems implausible.

What our community needs at this juncture is not a streetcar scheme that reflects no real public input and no opportunity for a public vote, but a true conversation about the future of our downtown core, and what we need to achieve it. The rhetoric of “world class city” is grand. If that’s truly our goal, we need a serious discussion of the meaning of “world class” and what it will take to achieve it.