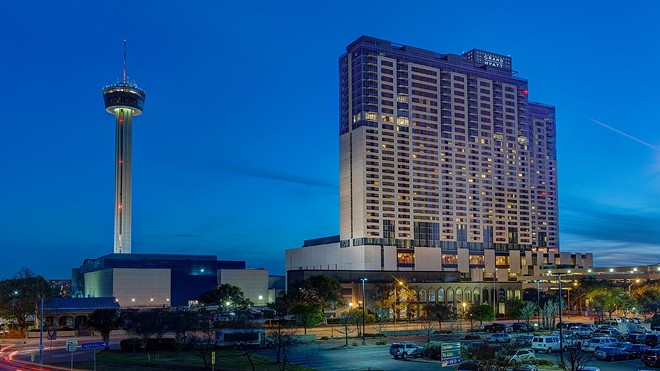 Courtesy Photo / Grand Hyatt
A deal to unload the troubled Grand Hyatt needs more scrutiny before city council's planned vote on Thursday.
CityScrapes is a column of opinion and analysis.

To call it a fast-tracked deal is an understatement. City council is scheduled to vote on measures to approve the deal at this Thursday’s meeting.

Last week, Walsh and Gorzell handed out a three-page “Overview & Summary Points” that included a “Summary of Benefits.” Among those promised benefits were that the city would continue to “benefit from a premier, full-service, convention center hotel operated by Hyatt” and that the city would no longer be required to provide “any financial backing or credit support for the payment of the New Bonds.” The plan is to issue those new bonds to pay off the city’s debt this March.

However, those ostensible benefits and others will still be around if we wait a little while to get a full accounting of the deal. And why are we selling such a beneficial hotel at the bottom of a pandemic-collapsed hotel market? Might the city do better by waiting a year or two to see if convention business returns and it can get a better price?

Then again, by dumping the hotel now, the city avoids reporting to the bond market — and the public — just how badly the hotel performed last year.

Here’s another funny thing. The city isn’t getting a “price” on the 1,003-room hostelry. It isn’t really selling the hotel, even at a loss. It’s using those new bonds to pay off the $168.3 million outstanding debt on the property, to pay back the city for the $10.4 million it spent to keep the bond payments up for the past two years and to take care of $4.9 million in unsettled ground lease payments.

But the city document values the new bonds at “up to $450 million.” Of course, there are costs to issue bonds — the original bond issue for the hotel ran around $15 million — and reserve funds are set aside to reassure bondholders that they’ll get paid even if the hotel continues to underperform.

Yet that total is nowhere near $450 million. Indeed, there’s a $266.4 million difference between the three items city staff said would be paid off and the total potential value of the bond issue.

So where do the rest of those undefined bond proceeds go? Your guess is as good as ours. The city document says the bonds will also fund debt and operating reserves for the hotel, pay the finance costs for the transaction and offer a payout to Hyatt to acquire ownership in the hotel.

In other words: after the council vote.

And then there’s the kicker in those vague details in the city handout: “the amount remaining would be paid to Hyatt to acquire ownership in the Grand Hyatt San Antonio Riverwalk Hotel.”

Hyatt isn’t “buying” the hotel. The city is paying the hospitality conglomerate — likely quite generously — to take the hotel off its hands. So, this isn’t a “sale.” It’s dumping the Grand Hyatt, then paying Hyatt, the corporation, to take it.

So, now we get to the big question. Why not put the hotel up for sale and see what the city can get for it? Why not wait a bit to see if it ends up being worth more in a couple of years? Why all the rush this week?

You won’t find the answer in the city’s “Overview & Summary Points.” Still, there are some hints. The original 2005 hotel bonds were backed by a portion — a 2% slice — of the citywide hotel occupancy tax. That’s the same tax the city used to pay for the last convention center expansions. Freeing up that 2% would allow the city to use it for something else — say another convention center expansion.

Of course, that wouldn’t happen in the next year or two. But the convention business is critical to the big downtown hotels, and it’s a good guess they’re already pressing for something, anything, to help bail them out. Besides, Dallas, Ft. Worth and Austin are currently planning for and moving ahead on their own major expansions — with price tags in the billions of dollars.

The panel recommended demolishing the Institute of Texan Cultures’ current location and replacing it with a new hotel and hospitality school. Presumably, no one told the panel about the collapse of the branch campus of the University of Houston’s Conrad Hilton College of Hotel and Restaurant Management in St. Paul Square during the pandemic.

The Institute of Texan Cultures’ current site totals 14.7 acres — far more than anyone would need for just a hotel and school building. Funny enough, that site lies in the natural path of the next convention center expansion. It’s blocked by the highway to the east and Market Street to the north. Just add the 2% hotel tax and take the Institute of Texan Cultures off the gameboard. Suddenly, the next move in the great Monopoly game that is San Antonio’s downtown becomes clear.

That plan, of course, is pure speculation on my part. But human minds have a funny way of drifting into speculation when there’s an absence of details about the motives of the machinations going on around them. And there are certainly many missing details when it comes to understanding city staff’s rush to do the Grand Hyatt deal.