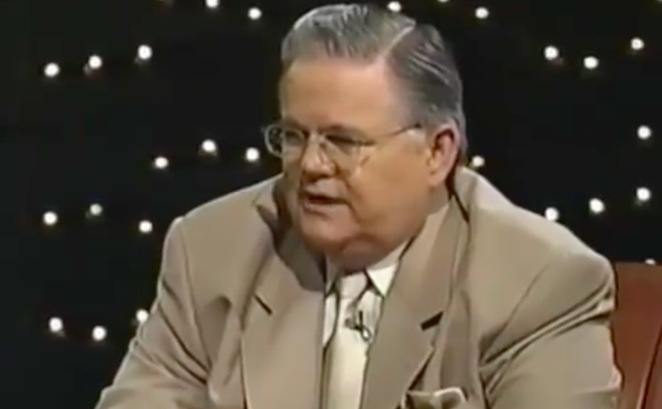 Who knew San Antonio megachurch pastor and renowned Islamophobe John Hagee was such a laugh riot?

The comedy website Everything Is Terrible has a knack for unearthing unintentionally hilarious videos. And in just in time for Halloween, it's sharing edited clips from an old broadcast where the Cornerstone Church pastor and Donald Trump ally reveals the sinister consequences of letting your kids trick-or-treat and read Harry Potter.

"The Harry Potter series is the thing that convinces me the Antichrist is not far off," Hagee blubbers into the camera. "Even Harry Potter's forehead is marked with the lightning bolt of the Hitler SS."

Nice! The beloved kid's character isn't just the spawn of Satan but a Nazi too!

One would think Pastor John would just collect the offering plate and head on home after a doozie like that. But, instead, he keeps laying on the Satan's-gonna-get-ya hokum thicker than buffet-line gravy. (Maybe prayer revealed the piece would later have comedic value and he wanted to compete with Robert Tilton's "Farting Preacher" videos.)

"Human sacrifice is common in America," Hagee says with a straight face, shortly before declaring that "Halloween is nothing but the repackaging of the theology of Satan."

To be sure, the holiday does sound spooky as Hagee's unidentified guest — a British woman also prone to Satanic panic — ticks off the many symbols and rituals associated with the holiday: skeletons, bones, pointy hats and "defecating on graveyards."

Which leads us to wonder, just what kind Halloween parties do they have in Merry Old England? Apparently, we've been missing out.