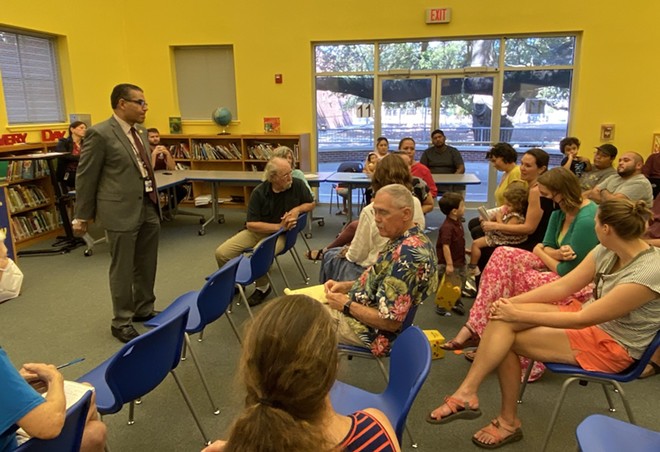 Sanford Nowlin
SAISD Superintendent Jaime Aquino listens to a parent's concern during Tuesday's meeting.
San Antonio Independent School District will rent a vacant property not associated with any of its campuses to an evangelical church that stirred controversy late last month with plans to operate from a public school in Mahncke Park.

Lamar officials announced Friday that the school would no longer be renting facilities to the church, saying that it was hammering out a solution that "does not involve a campus-based site."

Residents raised concerns about the church's plan to operate out of the school after an online interview surfaced with Garden City Pastor Carl Young, who said he was locating in Mahncke Park because its progressive views — which he likened to a "mini-Austin" — were anti-gospel. He also said he wanted the school to become financially dependent on his church.

In comments at the Tuesday public meeting and in an interview with the Current, Aquino said he met with Young late last week to discuss options that would allow the church to rent an SAISD facility without sparking controversy with neighbors.

"I said, 'I want us to come up and brainstorm a potential solution to this, because it's creating some unrest in the community,'" Aquino said during the interview. "And he immediately said, 'Jaime, we want to refocus. We're thinking maybe we need to find a different location. This is not how we want it to start.' He expressed his regret that he caused this hurt to the community, which was not his intention."

Aquino said school officials correctly followed district rental policies and that in his 36 years in public schools around the country, he'd never seen a similar conflagration over plans for a group to access school facilities during non-school hours.

"The school and the district followed our process," Aquino said during the interview. "We have a very clear process, administrative procedure, so nothing was done wrong here, nothing at the district — also, the church did nothing wrong."

During the Tuesday's public meeting, which drew several dozen Lamar parents and area residents, Aquino said his interactions with Young were cordial and respectful. The superintendent said he also established during the talks that he is a gay man.

As controversy built over the church's plans, some Mahncke Park residents expressed concern about Young's online video in which he said the area piqued his interest because he'd seen signs displaying pro-LGBTQ+ "rainbow colors with each of the five secular creed [sic]."

"They have a sign in their yard. I know exactly what they believe," the pastor said in the video, which was posted in February via a Christian YouTube channel. "And so I know what idols they have."

During the Tuesday meeting, some attendees expressed relief that Young had agreed to relocate. However, others said they were concerned that they only learned of the plan after the pastor posted about it on the neighborhood Facebook page.

"I live 100 yards from the front door of this school," said Ric Minks, a 29-year-Mahncke Park resident. "Any time you're renting, it affects me personally."

After some residents asked about whether the district vets potential renters or conducts background checks, Aquino said legal requirements prevent it from doing so. The First Amendment protects Young's ability to express his views, the superintendent added, noting that SAISD can't terminate a contract unless an organization actively discriminates against someone or otherwise breaks district rules.

Further, if the district opts to exclude religious groups from renting school facilities, it would need to stop renting to all outside groups such as the Boys & Girls Club of America. Otherwise, it would face legal liability for discrimination.

Still, some attendees asked Aquino to reconsider letting any outside organizations use campus facilities in the wake of mass shootings such as the one at Uvalde's Robb Elementary School, which left 19 students and two teachers dead.

"It opens up safety issues, because who knows who the church would attract," said Rocio Lopez, who has a child at Lamar.

Aquino said a decision to bar all groups from campus rentals was out of his individual hands. Such a call would require public discussion and a vote by SAISD's board.