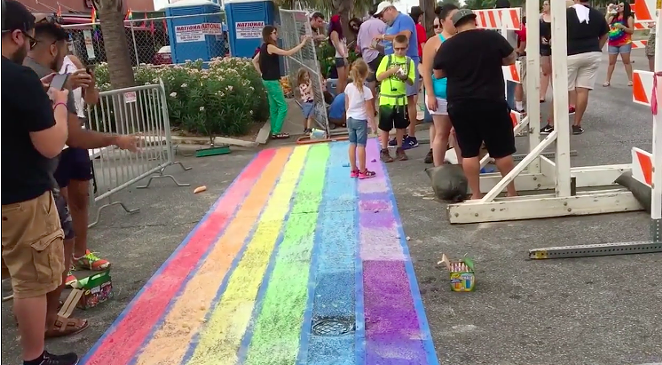 Screenshot, KSAT
It took the San Antonio City Council less than 72 hours back from a month-long recess to settle on its newest subject of partisan debate: a rainbow crosswalk.

The seemingly innocent idea — installing four rainbow crosswalks at the intersection of North Main and Evergreen — was proposed by District 1 Councilman Roberto Treviño shortly after Houston installed one of its own in June. A temporary chalk version popped up at the same intersection for the city's July 1 Pride parade, inspired by the proposal. In the heart of the city's small LBGT district, it seemed like a harmless act of solidarity from the city.

"The crosswalk will provide pedestrian safety while promoting a message of inclusion and tolerance," wrote Treviño in his initial proposal to the council.

At Wednesday's governance committee meeting, Treviño proposed the city install the crosswalks but run a six-month pilot study of its effects on traffic and pedestrian safety (issues raised by the city Transportation and Capital Improvements department) before making it official. He reiterated that the project would promote LGBT inclusion, and be the "important message we want to send in this political climate."

"We have so many more pressing issues in our city than painting crosswalks," wrote Brockhouse, who was elected to council a week before Treviño submitted his original proposal. "We need to fix the basics now. Instead of painting crosswalks we should be building crosswalks for schools, hiring more police officers and fixing our crumbling infrastructure."

Brockhouse stressed that no tax dollars should be used for the project. It's a fair point, considering the project's expected to cost a whopping $68,000.

According to TCI spokeswoman April Luna, installing one standard, white-lined crosswalk costs around $5,000. But a "themed" crosswalk comes with a $17,000 price tag — more than triple the usual amount. Luna said that's because of the "unique nature of the material and the amount of material." Since the city's looking to add four crosswalks, to connect the four corners of the intersection, that number is multiplied by four — leaving the city with a $68,000 bill.

It's hard to compare this number to other cities that have adopted a pride crosswalk, since they're so incredibly varied. Houston's four rainbow crosswalks cost a total of $15,000 — a cost covered entirely by the nonprofit Pride Houston. Atlanta's four? $196,000 of taxpayer dollars. But when Seattle installed 11 rainbows in 2015, they only paid $66,000.

Regardless, these price tags are a strong disincentive against something as benign as multicolored paint.

The city, however, will only pay $20,000 toward the project, according to Luna. District 1 will be responsible for fundraising the remaining $48,000. Treviño said he doesn't think it'll be too difficult to find private donors who want to back the project.

At the Wednesday governance meeting, pro-crosswalk District 4 Councilman Rey Saldaña, gave a preemptive response to the issues brought up in Brockhouse's press release.

"People say it's a waste of time and we should focus on other issues," he said. "But they may be on side that hasn't seen or felt what it feels like to be part of a marginalized group."