At certain CVB-approved times of the year, HemisFair Park is still very much an integral part of San Antonio. Turnout for the annual Texas Folklife Festival and other sporadic events ensures that, on occasion, HemisFair Park retains its status as a 40-year-old San Antonio landmark.

Most of the time, however, HemisFair Park is what it is — a one-shot tourist magnet that, with the exception of the playground, isn’t really much of a park at all. So it comes as little surprise that some area architects and developers are pushing for a radical makeover for HemisFair’s 140-plus acres that they claim will help revitalize the downtown area.

“With gas prices like they are, there is great interest in coming back to the inner city, where there’s an established infrastructure,” says Deputy City Manager Pat DiGiovanni. “It’s live, work, and entertainment, and we’re looking for a 24-hour destination in San Antonio.”

Downtown entertainment (see: River Walk, Sunset Station, Blue Star) and — to a lesser extent — work (local businesses and corporate offices aplenty) are not at the core of the proposals submitted to the city to date. Rather, the push is on to bring housing to HemisFair Park, maybe knocking down a couple of landmarks along the way. Those include, potentially, the federal courthouse, the contents of which — thanks to a recent land-swap agreement — will eventually move to the SAPD’s current downtown locale.

The courthouse originally served as the Confluence Theatre for HemisFair ’68. It’s a fabulously ’60s towering spaceship paneled in New Mexico travertine that the City’s official site inventory refers to as a “textbook example of New Formalism,” a brief architectural trend that drew on Classical Greek and Roman elements. (Of course, the site inventory also calls it the “John S. Woods” courthouse, although it’s named for John H. Wood Jr., the federal judge who was murdered in a drug-trial hit, allegedly by Woody Harrelson’s father.)

One source speculated that the San Antonio Independent School District was interested in moving its nearby headquarters into the soon-to-be-vacant building, though an SAISD mouthpiece said the district “is not considering relocating to the courthouse at this time or any time in the near future.”

According to Seahn Lobb, president of the Lavaca Neighborhood Association, a number of proposals for HemisFair’s transformation have been submitted to the city, including a much-discussed but still private design from local starchitects Overland Partners. But only Michael Berrier, a former Association president, propositioned the Lavaca group, which represents the neighborhood adjacent to HemisFair.

Lavaca’s board accepted Berrier’s proposal, Lobb said, albeit with a few slight modifications. While Berrier’s vision includes leasing parcels of HemisFair land for downtown housing, the Lavaca Neighborhood Association stressed the addition of businesses in and around the area.

“The main issue for the board was the topic of housing,” Lobb says. “We do want it in there ... but the whole board is torn. I would like to see some type of redevelopment that includes a residential area, but not all residential, not 100-percent. It’s the percentage we’re concerned about. There should absolutely be businesses. Residents in a neighborhood can’t function without businesses, and vice-versa. This is the case with Southtown.”

Berrier declined to go on the record for this story, though sources close to the situation say that his proposal includes potentially leveling the courthouse building. City officials say they haven’t looked that far into the future, but admit that razing historic structures doesn’t always go over well in the Alamo City.

“I’ve been in San Antonio for a couple of years now, and I’ve seen the great passion that it has for its historic structures,” DiGiovanni says. “Those are of great significance to the community, but this is part of the process. We’ll look at all of the structures in HemisFair Park from there to see what’s economically viable. Whether those structures fit within the grand scheme, I don’t know.”

San Antonio Mayor Phil Hardberger was unable to speak with the Current regarding the fate of HemisFair due to some unidentified out-of-town commitment. He told the Express-News in April that he understands the city’s adoration of its historic buildings, but he acknowledged that progress sometimes leaves a few casualties in its wake.

“While I am a big believer in historic places and I believe that roads are sometimes the enemy, it’s just not working, and we really need to take a fresh, innovative look and let that land be used,” Hardberger told the E-N.

In a somewhat ironic twist, the HemisFair grounds were originally developed in the 1960s only after the city demolished one of its oldest neighborhoods following a protracted preservation fight that went all the way up to Washington D.C. That neighborhood, according to various reports, included more than 200 homes and nearly 150 commercial buildings.

Now that HemisFair has held out the promise of a green space in the core of the city for four decades, other downtown advocates say it’s important to perserve that function.

“We feel that it’s very important that we retain the park as a significant open space in the middle of downtown, and it’s very important that we strive for absolutely as much park space as possible,” said Ben Brewer III, president of Downtown Alliance San Antonio. “HemisFair certainly provides that kind of opportunity, and there are ways that might involve tearing down buildings or moving them around to free up more open space.

“I don’t have a position on whether the City ought to be privatizing pieces and whatnot, but I do support the goals of the master plan.”

The City assembled the HemisFair “master plan” four years ago to guide the park’s development. Of its many goals, here are but a few:

• “Promote the provision of sound and affordable housing to all San Antonians.”

• “Preserve and enhance the city’s historic resources.” (Leveling the federal courthouse building was probably not what master-plan creators had in mind.)

“It ended up being put on the shelf because it became so disjointed, almost like a menu at a Chinese restaurant,” says Marcie Ince, president of the San Antonio Conservation Society. “There were some things from Part A with two things from Part B, and it was just not a workable plan. We would like to come up with something that will function, and give a blessing to what we think it ought to say.”

Adds Lobb: “We already have a master plan in place, but unfortunately very little of that plan has been implemented or adhered to. As a neighborhood association, we don’t want to reinvent the wheel. We thought the old plan was great, but we’d like to see it tweaked and carried out.”

Reasonable minds differ on the preservation of HemisFair’s structures, but community and City representatives who spoke with the Current agree that it is time to move beyond the brainstorming phase.

“There are `some proposals` on the table, and we have begun the process of gaining input,” DiGiovanni says, “but we have to move on to the implementation stage.”

And sooner rather than later say the interested parties: The man helping spur HemisFair’s redevelopment — Mayor Phil Hardberger — is slated to leave office in less than a year.

“I don’t know about a specific timetable, but I do know that this is something that needs to get started before Mayor Hardberger gets out of office,” Lobb said. “It’s like a ticking time bomb, and time is running out. And even if `Hardberger` starts it, that’s not to say the next mayor will continue it. So it needs to get as far ahead as possible if we want to do something.”

Before that happens, however, those involved in the HemisFair discussions must first decide which facilities are expendable, and which are not.

“We need to put everyone under one tent,” Ince says. “What we’re trying to do is come up with a list of what are sacred cows and what are not, and let them know ahead of time. That way, nothing changes after the process has begun.”

Ah, well. If the master plan is any indication, it certainly wouldn’t be the first time. •

And now, For something not so different

Though the Lavaca Neighborhood Association board voted to support plans that would drastically alter HemisFair Park, not all association members are enamored of Michael Berrier’s proposal.

“This `proposal` is not consistent with the master plan of 2004,” says Sandy Yturri, secretary of the Lavaca Neighborhood Association and a resident of the area for five years. “We’re basically agreeing to turn public land over for private development.”

Proponents of the Lavaca-approved plan, which would level some federal buildings in HemisFair in order to create more open space, cite the need for increased housing and local businesses in the area. Yturri agrees that HemisFair would be better served with more open space — solidifying its status as an actual “park” — but doesn’t want to see it transformed into some 21st-century tourist trap or cookie-cutter suburb.

“The goal as I see it now is not the goal that was stated in 2004,” she says. “It’s a park, a public entity, but there’s always some gimmick to make it some sort of theme park ... or HemisFair Park subdivision.”

Yturri and some of her fellow HemisFair loyalists plan on voicing their support for the park as a historical San Antonio landmark, including arranging picnics in the area to help foster a sense of community. Yturri also disagrees with the notion that HemisFair’s best days are behind it.

“There’s this myth of it being an underutilized place,” she says. “I hear that a lot, but if you sit inside, there are a lot of people and a lot going on here.”

Regardless of what happens to the HemisFair grounds, Yturri and her neighborhood support group say they simply want the park’s future to be determined by more than a handful of powerful, agenda-driven individuals.

“I want to see more focus on what the community wants,” she says, “not what a select few individuals want.” 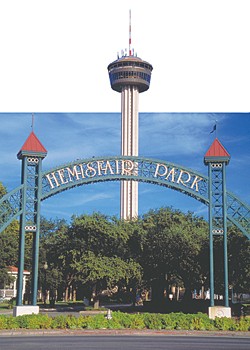 For those who have forgotten — or who simply weren’t born yet — HemisFair Park has made quite a few memories, both good and bad, in its 40-year existence. Here are six of the more notable:

April 6-October 6, 1968: HemisFair hosts the World’s Fair (HemisFair ’68), which draws more than six million people to the Alamo City. The event serves as sort of an unofficial catalyst for San Antonio’s tourism industry.

1973-1993: HemisFair Arena, originally built for the 1968 World’s Fair, serves as the home of the NBA’s San Antonio Spurs, as well as numerous other San Antonio athletic endeavors (anyone remember the San Antonio Force arena-football franchise?). In 20 seasons, the Spurs played before nearly 10 millions fans.

June 1995: With the Spurs relocated to the Alamodome (remember, some thought it a good move at the time) demolition begins on HemisFair Arena. The site now serves as an expansion of the Henry B. Gonzalez Convention Center.

April 25-28, 2007: Looking to liven up the HemisFair Park area during Fiesta, Nikita Productions introduces Siesta Fest, an unofficial event featuring live music, food, drink, and all the other Fiesta staples. A scaled-back Siesta Fest was brought back this year in a two-day format.