Sarah Flood-Baumann
Things got regal on this week's installment of CurrentCast. 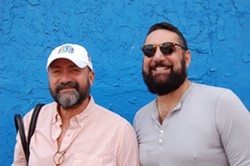 Cornyation's regent has long been a king, although the first queen was crowned in 2014 when Jody Newman and her husband Steve, owners of local joints like The Friendly Spot, ruled jointly. Two kings at once is a first, and it's a title that Bobo and Beers — who've been together for over 30 years, married for four — are happy to hold.

Listen to the podcast below to hear Bobo and Beers discuss what it does (or doesn't) mean to be the first Kings Anchovy, who designed their awesome Fiesta medal, and what might raise eyebrows at this year's Cornyation. Stream below, or download the podcast at Soundcloud, iTunes (search "CurrentCast"), or Stitcher.


For more on Bobo and Beers, check out this article from the most recent issue of the Current and Out in SA. For tickets to Cornyation, click here.