The Mine Shaft Saloon 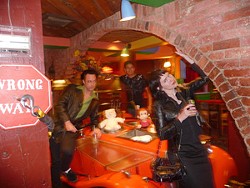 Chris Smart, Florencio Contreras, and Tracy Scarborough succumb to the siren call of the Mine Shaft Saloon, the in-house bar at SA time capsule the Magic Time Machine.
Release Date: 2009-05-27


Most 30-somethings who grew up in San Antonio have at least one fond memory of the Magic Time Machine. Maybe it began with a Roman Orgy shared by a roomful of 8-year-old boys who made multiple trips to the men’s room to gaze upon the decoupage of Playboy Playmates that covered the walls.  Several years later, you may have arrived with your prom date in a white limousine to order “Magic Potions” fizzing with dry ice from a waitress dressed as Princess Leia. If you are not one of these people, and have never been inside the 36-year-old brainchild of architect Ronald Masters, you are missing out on one of SA’s finest examples of high-kitsch dining.

The Mine Shaft (which served as a storage room for the Magic Time Machine until 2007) is nestled in the restaurant’s back corner and has all the charm of a teenager’s bedroom decorated in the middle of the night. Albums, 8-tracks, garden tools, waffle irons, and colored rope-lights are attached to the ceiling and walls. Hanging out in the Mine Shaft feels a bit like you’ve snuck into the prop closet of a low-budget movie. This feeling becomes even more prevalent when the Magic Time Machine closes and the restaurant’s costumed servers unwind while doing their side-work: Snow White begrudgingly rolls silverware in napkins, Indiana Jones eyes Princess Jasmine’s butt as she struts into the kitchen with a stack of plates, Harry Potter (over a cigarette) explains his exit strategy from Hogwarts — he has plans to transform himself into The Joker in the near future. If you’re lucky, you might even get an after-hours tour through the restaurant’s countless themed dining areas. This is free entertainment at its finest.

As one regular explained it, “This place has all the best qualities of a dive bar without any of the riff-raff. I never see anyone I know, which I love.”

Unless you’re ordering a themed cocktail like “Wonder Woman’s Tonic of Truth” ($6), prices are very low and nobody seems to be looking for a fight. Free live music on Friday and Saturday nights attracts a fairly eclectic crowd (I was particularly charmed by the sight of a giant cowboy hat and a pompadour in the same audience). The last hour of the night attracts a loyal following of restaurant-industry types who make themselves at home while downing pitchers of Shiner ($6) until closing at 2 a.m.

When the Magic Time Machine first opened, it had an onsite discotheque, which unfortunately no longer exists. Some of the disco’s finest furniture, however, is now used in the Mine Shaft: specifically a group of low-sitting upholstered chairs that surely have some good stories to tell. Notoriously, a cocktail waitress who dressed as a sexy Cleopatra had a habit of asking patrons seated in the disco’s lounge if they wanted to see her “asp” as she bent down to serve their drinks. Unfortunately, the restroom’s Playboy decoupage was removed after an incident involving a young boy who took too long returning from the restroom. After searching everywhere, his mother found him licking the restroom wall and demanded that the collage be destroyed.

Although the Magic Time Machine has fallen off most of our radars, there’s finally a reason to go back. Don’t bother eating in the restaurant; just order a drink at the Mine Shaft and get lost on your way to the bathroom.