The segment trolls Cruz over his recent Twitter tantrum about the Sesame Street muppet getting the COVID-19 vaccine. 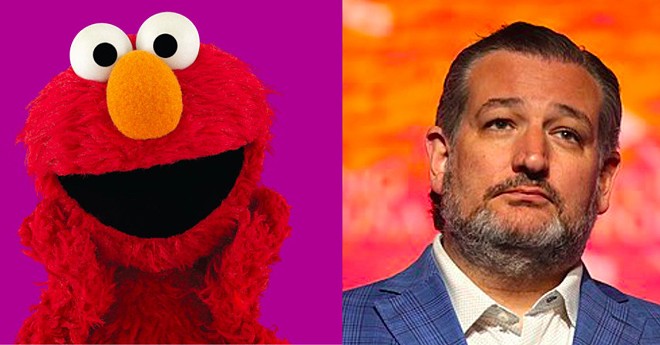 Facebook / Sesame Street (left); Wikimedia Commons / Gage Skidmore
Apparently, U.S. Sen. Ted Cruz (right) is learning that muppets can clap back.
Few things satisfy like seeing blowhard, out-of-touch politicians savaged by satire. And when that satire is in the form of singalong-ready tune performed by muppets? Well, all the better.

As you may recall the far-right Cruz — who's vaccinated but likes to play an anti-vaxxer when it's politically beneficial — had a similar meltdown last fall when Elmo's pal Big Bird got jabbed, calling it "government propaganda ... for your 5-year-old!"

Naturally, at the end, we learn the segment was brought to us by the letters F and U.

Check it out below:
Stay on top of San Antonio news and views. Sign up for our Weekly Headlines Newsletter.