Cantu still potentially faces one more surgery along with lengthy rehab, according to his family. 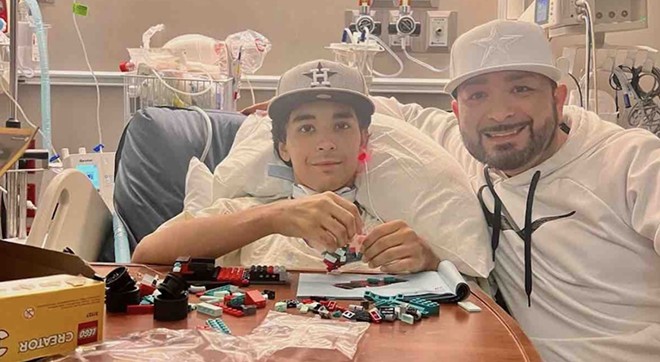 GoFundMe / Support for Erik Cantu
Erik Cantu was shot at least four times by since-fired SAPD officer James Brennand.
Erik Cantu, the 17-year-old critically injured from shots fired by a since-terminated San Antonio police officer in a McDonald's parking lot, is awake and smiling, according to a statement by Cantu’s father.

“After 6 long weeks and by the grace of God along with all the prayers sent by the masses we are emerging victoriously from this unfortunate event,” said the Nov. 11 update on the family’s GoFundMe account.

In the photo included with the update, Cantu is seen smiling and playing with Legos.

The update is a big step for the youth, who was taken off life support last week. It's unclear whether he's still breathing with the help of a tracheostomy, as earlier reported by his family.

Cantu still potentially has one more surgery and “weeks and months and years of rehab," according to the statement.

The unarmed teen was shot at least four times during an early-October encounter with then-SAPD officer James Brennand. The shooting unfolded after Brennand confronted Cantu in a McDonald's parking lot after recognizing his car from an incident the previous night and thinking it was stolen.

Brennand was fired from the force days later and has since been charged with two counts of aggravated assault by a peace officer — a first-degree felony.

The GoFundMe campaign launched to help cover Cantu's mounting medical bills had pulled in nearly $42,000 as of press time.