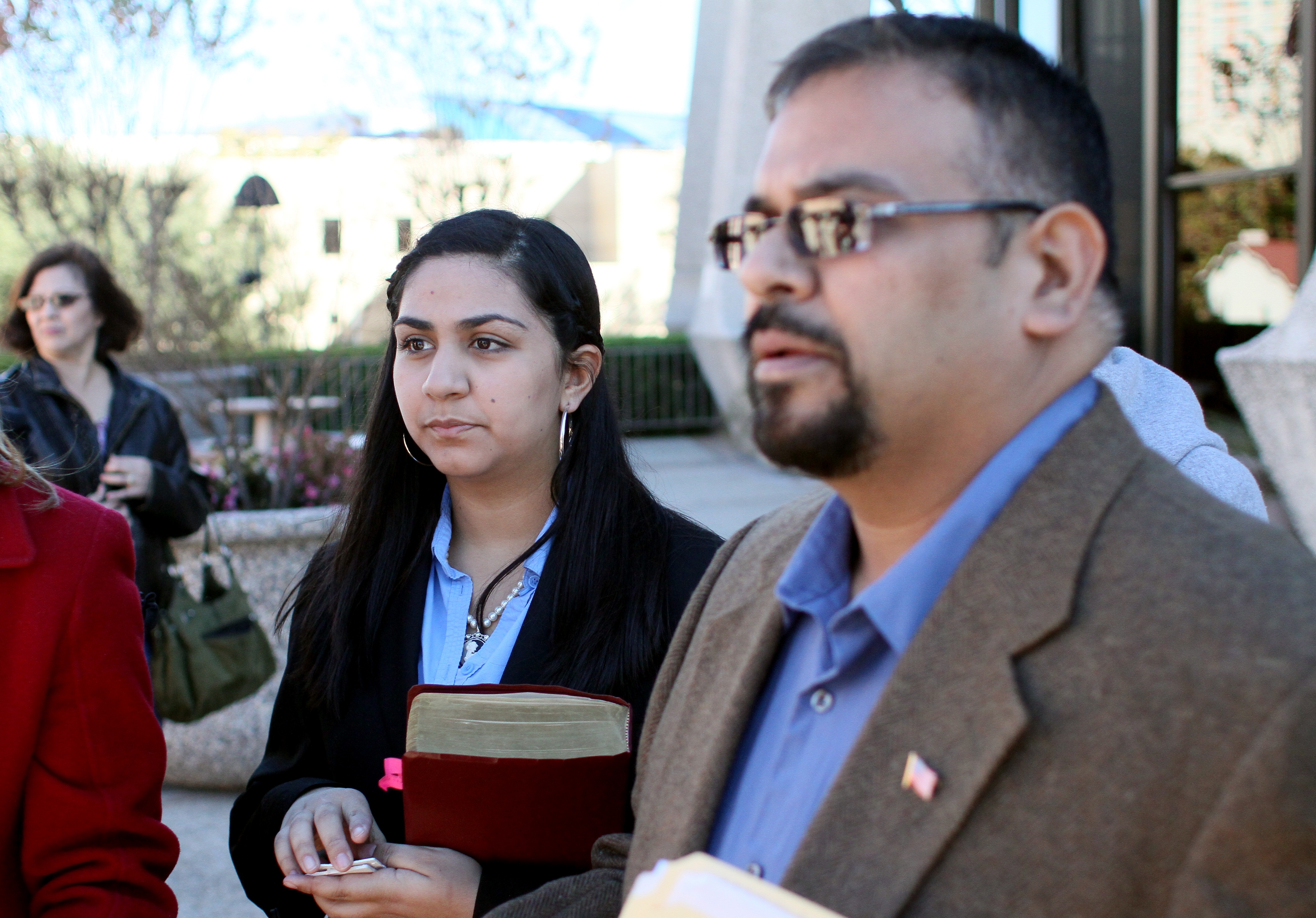 Andrea Hernandez, with Bible in hand, and her father, Steve Hernandez, outside the federal courthouse Monday.

Just fifteen minutes into Monday's court hearing, U.S. District Judge Orlando Garcia let out a sigh, rubbed his temples, and asked, “OK, so what exactly is the Mark of the Beast?”

Talk of the Antichrist, the Book of Revelation, and “spiritual warfare” swirled around Garcia's courtroom this morning as he heard from a Northside ISD sophomore fighting her expulsion from the district's John Jay magnet school.

Andrea Hernandez and her father Steve Hernandez (both eight-year members of John Hagee's flock at Cornerstone Church), have fought for months with Northside over the district's “Smart ID” pilot program at John Jay, which puts radio frequency tracking chips in student IDs. Andrea Hernandez and her father, Steve Hernandez, insist the badge is a precursor to “Mark of the Beast,” as described in Revelation, which the Antichrist will mandate during the End of Days to track and control his subjects (seriously).

Before Thanksgiving, the district, in a letter, told Andrea Hernandez she could no longer stay in the magnet program unless she acquiesced to wearing the ID badge without the chip. To the Hernandez family, the compromise was unacceptable. Eventually they got the attention of the civil liberties group the Rutherford Institute, which got a Bexar County judge to sign a temporary restraining order the day before Thanksgiving, keeping the district from kicking Andrea out of the magnet program.

Northside filed to have the case removed to federal court, hence the bizarre courtroom scene Monday

The first to testify Monday was Steve Hernandez, the student's father. He brought his weathered Bible to the witness stand and then, fighting tears, read a passage from Deuteronomy explaining how, as the head of his household, he's responsible for the “physical welfare, spiritual welfare, and salvation” of his family.

Then Steve Hernandez read the end-times warnings from Revelation 13:16-18, which speak of the “Mark of the Beast.”

“If I allow my daughter to wear this mark

her salvation would be compromised,” Hernandez insisted. Outside the courtroom, I asked him who the Antichrist was in this scenario. “Northside. In this case, Northside is the Antichrist.”

Northside officials, however, say they've made what accommodations they can. Newly-minted Northside ISD Superintendent Brian Woods outlined in court why the district undertook the tracking chip pilot program in the first place. Districts get money from the state based on attendance numbers, and Northside officials feared too many of its students were slipping from the head-count because they were late to class, stuck in the nurse's office, or present, but not in class during attendance for whatever reason. The lost revenue became even more worrisome in light of historic cuts to public schools from the Legislature last session – Northside, in particular, lost $61.4 million in state funding, costing the district 1,000 positions, Woods testified.

Were Northside to implement its tracking chips district-wide to log student attendance, which it does plan to do in the future, the district could score an additional $25 million in state revenue over the next decade, Woods said in court.

Civil liberties groups have loudly decried Northside’s pilot program as a major privacy concern, questioning how student movement is tracked on campus, along with worries over how the data is kept, where it's kept, and how safe it is. Still the Hernandez family has taken the district to court on religious grounds. Hernandez's claims did have a free speech element, claiming the district stopped her from passing out fliers on campus criticizing the program, but her lawyers dropped the issue in court Monday.

While Judge Garcia said he would decide this week whether to issue an injunction to keep Andrea Hernandez at John Jay high school, Northside ISD lawyers said the district has decided to let her finish her fall semester at the school, regardless the judge's decision. -- Michael Barajas