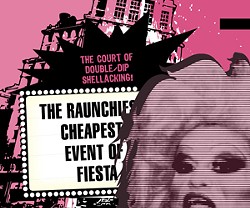 
Billed as the “raunchiest, cheapest event of Fiesta,” Cornyation has been providing over-the-top theatrical experiences for 28 uninterrupted years and has roots as far back as 1951. This adults-only satire has raised more than $500,000 for such local charities as San Antonio AIDS Foundation, Black Effort Against the Threat of AIDS, and Help Action Care. The Court of Double-Dip Shellacking is ruled by King Anchovy 2011, Tim Campion, with support from a guayabera-clad clan of 60 he’s dubbed the “Caviars.” Just how hysterical is this worthwhile spectacle? Just ask Cornyation fanatics Ralph Rodriguez and Rick Bustos, who broke a Fiesta record in March when they waited a reported 62 hours in front of the Majestic box office to nab prime seats for the show. “CornyAngel” seats (which include two Cornyation medals): $125 per pair; orchestra seating: $30; mezzanine seating: $20; balcony seating: $15; 8pm and 10:30pm Wed, Apr 13; 8pm and 10:30pm Thu, Apr 14, Charline McCombs Empire Theatre, 226 N St. Mary’s, (210) 226-3333, cornyation.org, fiesta-sa.org.