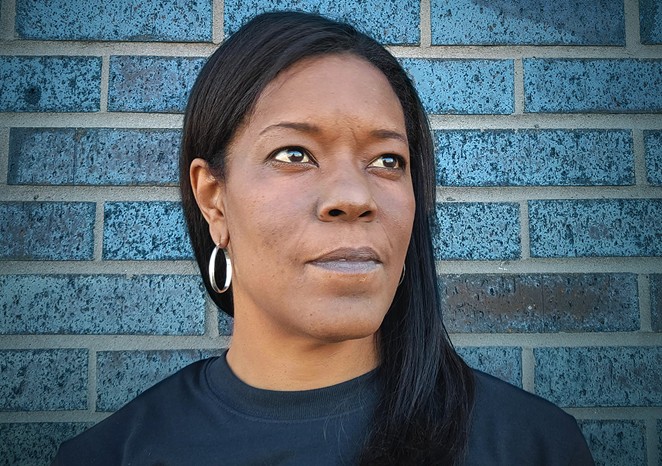 Jade Esteban Estrada
Nneka Cleaver is facing 11 challengers in her bid for San Antonio City Council's District 2 seat.
When Nneka Cleaver appears on my screen, she’s sitting at a booth at Taqueria Los Dos Laredos, a bustling establishment on Rigsby Avenue. She’s between appointments with community members seeking her help. Bursting with enthusiasm, she tells me about her bid for San Antonio City Council, District 2, where she will face 11 challengers on the May 1 ballot.

“I’m all about bringing people together,” she says. “I’ve been doing it for years, so I’m very confident that I’ll be able to do it for the district.”

My first introduction to Cleaver, 46, came by way of The BrockCast, the internet talk show hosted by mayoral candidate Greg Brockhouse. Cleaver, a gifted orator with “old-school values,” presented a robust campaign pitch that left the former councilman uncharacteristically speechless.

Cleaver is accustomed to having the floor. Growing up as an only child, she was the sole recipient of her tight-knit family’s love and attention, participating in extracurricular activities from karate to ballet.

“My parents had to buy all the Girl Scout cookies,” she says, laughing. “Everything I’ve done, they supported.”

Years later, when her mother died, her father told her that she would need to start emotionally preparing for his own passing, a conversation Cleaver found unsettling.

“He said, ‘[Your mother] was the love of my life, and normally, the loves of your life don’t live longer than seven years apart.’” She pauses. “My dad died seven years after my mom passed. I know he passed away from a lonely heart. My mom was his heart.”

After her father’s death, Cleaver found herself at a crossroads.

Indeed, Cleaver’s interest in community service became an extension of her spirituality. She remembers wanting to get more involved in Christmas toy drives when she noticed that many children were only getting one gift from the charity events.

“And it [was] from the dollar store?! I was so hurt by that,” she says. “When I grew up, I had so many Christmas presents I used to get tired of opening them. I said, ‘No. They need a Cleaver Christmas where you get to open more presents.’”

And so began her annual Christmas Giveback in 2013.

Her outreach work eventually allowed her to cross paths with the political world. An internet radio host, Cleaver used her platform to help previous D2 candidates on their path to City Hall. Over time, she began to notice patterns.
“I understood why people were voting differently,” she says of District 2’s merry-go-round of council representatives.

“A lot of people don’t know this, but they had to beg Cruz [Shaw] to run,” she says of the D2 councilman who resigned in 2018 to become a district court judge. “At the end of the day, I feel like District 2 hasn’t really been given the [candidates] that have the love, the passion and the knowledge about the district.”

She includes first-term Councilwoman Jada Andrews-Sullivan, the D2 incumbent, in her assessment.

“I’m so connected I probably get 10 to 20 phone calls a week from people I don’t even know because Jada won’t answer her phone,” Cleaver says.

As an organizer who aims to unite the diverse groups that make up District 2, she has been publicly critical of Black Lives Matter, saying the progressive group has sewn division.

“I really don’t like anything that divides,” she says. “We can’t get anywhere with division.” What’s more, Cleaver says she doesn’t like having to say that her life matters.

“I am a child of God,” she says. “I am a human being. And I feel like it’s degrading to have to tell somebody, ‘Oh, excuse me, my life matters.’” She leans into her camera lens. “Where have you put me where I have to tell you that my life matters? We spend more time arguing about whether Black lives matter, all lives matter, blue lives matter that we have forgotten about the actual movement — which is justice.”

As Cleaver continues knocking on doors, she’s come to understand that many residents simply want to be heard. “You don’t have to come down with a solution, they just want you to sit down and listen for real,” she adds.

Sometimes, she’ll let an hour tick by as she talks to one of the potential voters she’s called on.

“I want people to completely tell me everything. And then we try to come up with some kind of solution,” she says. “If we don’t, I give them a hug, we’re gonna pray and we’re gonna keep on trying to find resources. Right now, that’s all I can do. I’m not sitting in the seat yet.”